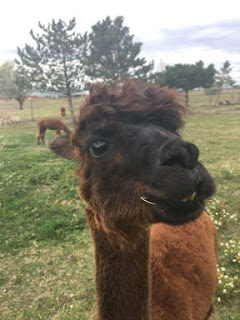 For Mother's Day, I received a gift certificate for an Alpaca Walk at S.A.M.Y's Alpaca Farm.   My husband had arranged this with my daughter.   We weren't quite on the ball when we reserved our dates, so ended up going in September.  It was a wildly windy day, but the rain held off and temperature was  perfect, just comfortable.

When we arrived, we were greeted by an absolutely enormous St. Bernard dog.  He was an overly friendly, energetic, but gentle and somewhat slobbery giant.  We were told his background story: he was a rescue, and it's amazing that he is as well socialized and friendly as he is.

The gal, whose name I don't remember, who hosted our adventure, was extremely knowledgeable.  Her talk included a ton of information and she answered our questions nicely.  She was welcoming, friendly and put us at ease immediately. 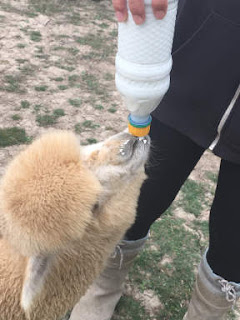 We got to bottle feed Elizabeth, who was an orphan alpaca.  She's 5 months old here, and really didn't need a lot of feeding.   It was fun to do though.

We were given containers of sweet feed to feed to the ladies, 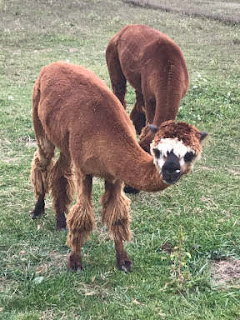 who  were a tad pushy, but not aggressive. They did like the grain and weren't pushy towards us, but towards each other, vying for that little handful of grain and molasses.  The girls were incredibly gentle to us, veritable strangers in their midst.
They have several guard llamas who were very gentle as well.  I'd only met very aggressive  llamas in the past, so this was a good experience.  The stories told, showed us the llamas were worth their while, since they had trampled several coyotes in the past and kept the herd safe from predators. 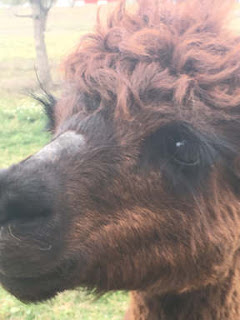 After meeting the girls and doing a walk by the boys, we went into the barn where we met the working boys, who do the walks.  There were 5 of them, who were pretty, trained to walk on a lead and quite accepting of strangers.   We got to choose from 3, as 2 of the alpaca had already been out in the morning.    They were easy to halter and lead nicely, however Rusty, my daughter's pick, wasn't happy about being on the roadside.   With the wind, I could hear the chuff, chuff, chuff of the wind turbines in the distance, so I wondered what the alpaca could hear and if that was why they weren't overly enthusiastic about walking outside.  So when my alpaca decided to balk as well, we went the opposite way and got a short walk in the other side.  We were told that usually they are quite compliant and enjoy the walks.   They were certainly appreciative of the little patches of alfalfa clover that we lead them to here and there along the way.

This was a fun way to spend a couple of hours and I think well worth the nominal fee.   I would have brought home a fleece, if Nick's fleece had been in the little shop.  He's a dark grey and was incredibly soft.  The other items were quite reasonably priced, however I didn't need a mug, no matter how cute it was and I don't generally buy yarn.
I have to give kudos to hubby for finding this place and making arrangements for me to visit.  It was brilliant! 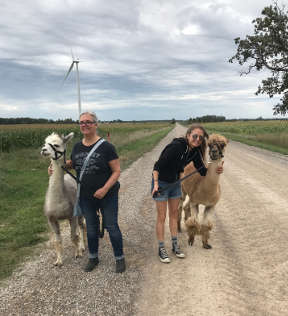