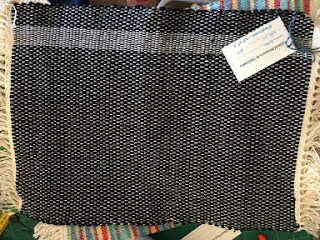 I was making place mats - sort of like this.  I wound a warp long enough for 10, with lots of loom waste and then added an extra yard last minute.    I warped from back to front and thought all was well.  I started weaving and my tension started getting wonky.  First one area of a few threads and then a different area.   After fussing with it for a while I realized that it would be faster to just unwind the whole warp, chain it as I was going and rewind it on.   I'm almost at the end of winding it off and chaining.   What a pain this is though.  More than once I thought how much easier it would have been to just cut it off and restart.   But that would be a huge waste. 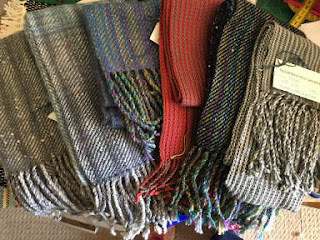 It was Fleece Festival last weekend.  My guild was there.  We answered a gazillion questions about weaving and spinning.  Tons of people got to try their hand at throwing a shuttle on our demo loom.   I helped a number of people with spinning issues/questions they had and was a focus of many.    We handed out tons of information and even sold a few items.   It was a hugely busy weekend.   I even managed to get all the ends twisted on my pile of scarves. 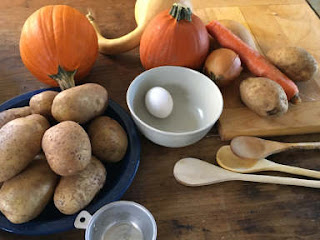 It was Pumpkin Sunday at Westfield.   The weather was perfect and there were many visitors.  We were all cooking all sorts of pumpkiny things.   I worked with a family of 3 who were great fun.   I'd researched some recipes to cook, with a pumpkin/squash theme from 1850-1860. I had to modify them for a couple of reasons.  The soup was scaled down to a usable volume.  We did a vegetable soup, with squash grown in the Lockhart garden which was substituted for turnip, as per possibilities in another recipe in the same book.  Then we made a pumpkin cornbread and a steamed pumpkin pudding.  The pumpkin pudding was a bit of a historical stretch, but very delicious.  It was PUMPKIN Sunday after all and felt it important to follow the theme.    I'm a bit ticked that I didn't get a chance to photograph the rest of the foods since they looked so good.  However it was too busy to haul out the electronics and then we ate lunch together.    It was a lot of fun and so tasty