I decided to make a new pair of mittens.   There was nothing wrong with the ones I made a couple of years ago.  They were still in good shape and were still two of them, which seems to be important :)   I was a bit concerned that I'd be in a bit of a bind if I lost a mitten when on a trail, or getting groceries.  It's happened before, but I usually have a couple of spare pairs lying around.  However this was the spare pair before and I haven't replaced them, so it was time.

I had a bunch of Corriedale roving bits and pieces, so I dragged out the blending board.   The blending board is a fun tool.  I have mine because it was a lovely gift.  My first introduction to the blending board was a demo one of the students did at a class.   She brought out the board and a gazillion bits and pieces of fibre, piled them on the blending board haphazardly while poking them down once in a while.  Then she pulled off a single, gigantic, messy rolag.  I couldn't understand why anyone would want a tool which produced what was likely a difficult to spin, chaotic mass of fibre.    Luckily there are a myriad of videos out there which show how easy it is to make functional rolags on a blending board.    I wish I'd taken photos of these rolags, because they were much prettier than the resulting yarn! 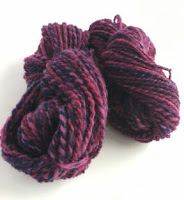 This is a soft, bulky yarn, using  purple, raspberry, navy and pink colours. I used the rolags and a long draw to make the Corriedale soft and airy.  The yarn is thicker, on purpose, than I would normally spin for mittens, but I was looking for something warmer than my current ones.   By spinning the yarn thicker and then planning on knitting it on smaller  needles, I could create a dense mitten fabric which held the heat better, and let less air whistle through on blustery days.  I've done this before and they are great mittens for scraping the snow off the car, walking and general outdoors activities.  Not so good if you need to manipulate a camera button or other things that require a bit more precise finger action. 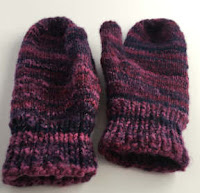 The mittens were quick to knit up because of the bulky yarn.   I was using bamboo double points, 3.5 mm and I was worried one would break, but they did just fine.   The mittens fit pretty perfectly, which is nice but of course I did have my hand easily accessible for when I wanted to try it on while knitting.    I didn't use a pattern because I've knitted a lot of mittens over the years and a plain mitten with a thumb gusset is pretty formulaic.   I just had to play around with a couple of gauge samples before I started to knit for real.

It's a good thing I had them finished and ready to go.   On Friday they were calling for a crazy amount of freezing rain.  The forecast I checked showed about 8 hours of freezing rain and another 4 of snow/freeing rain mixtures.   We'd battened down the hatches here, gassing up the generator, bringing in 3 days worth of wood, scrubbing and filling up buckets with water.    We're on a well and if the power goes out, so does our well pump.  I didn't want to run out of water for the chooks. 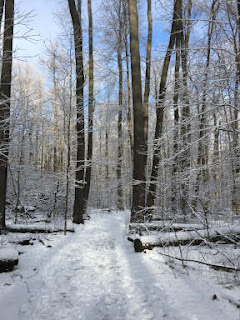 It ended up that we had a limited amount of freezing rain.  Just enough to make the world sparkle.   On Saturday, when the temperature was warming up, we went for a hike.   I brought both pairs of mittens for some reason, which when we got to the trail, turned out to be that my sweetie had forgotten his thick gloves.    Now he has my old mittens and I have these new ones.  Not horribly pretty but happily, they are really functional.

The world was beautiful with a crystal sparkle.   Because the temperature was just hovering above the freezing mark, we did get dripped on a bit.  The trail however, was snowy and not icy at all.  The sun shone for a bit, which made it a spectacular and fun short hike.