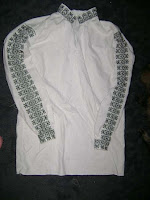 The shirt is finished. It turned out well for a new pattern draft. I had to remove the sleeves and shorten them and shifted the neck gusset after a chat with the friend who designed this draft.
The shirt is lovely. I thought it was perfect, but when it was tried on, I thought it might be a tad small. Movement isn't hindered at all with this one, but it looks just a tad "off" in some way. After much consideration and after I'd already emailed my friend to say it was perfect, we decided that it needed to be a tad larger in several areas, for the recipient's comfort level. I know the sleeve width was an issue, but in the end, I will add a few more inches in the body width for the next shirt and then this one will get handed on to the skinnier, younger generation fencer in my family. He tried it on and it fit him perfectly. It looked like I had made it for him.
Regardless, it is a pretty snazzy shirt, though I don't think I'm going to do that dense a blackwork pattern again. It loses something in the shirt I think and the next doublet will have sleeves, which I've been told means that the shirt doesn't really need to have blackworked sleeves after all :)
The next one will be prettier I think.
Posted by Nina at Friday, February 15, 2008 1 comment:

New Project on the go...

I had promised he who supports me in all I do, some new fencing armour. Well, really he has several IOU s for Renaissance costumes, new fencing armour, a 14th century outfit and a middle class or working class shoemakers outfit. I've been gathering and ageing textiles appropriately but the inspiration really hasn't 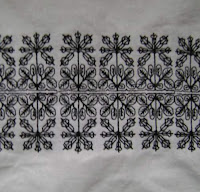 hit. In the past couple of weeks though, I've found gorgeous fabrics and some great pictures for the above and inspiration to start back at it again is once again flowing.

This week has been a rush to try to get new fencing armour ready for the weekend. It won't happen, not the way I'd envisioned it at anyrate.. which was a gorgeous striped doublet with laced sleeves and tied with points to his new venetians and the shirt. It might have happened or been close if I hadn't given in to the please put blackwork on the sleeves too - if it had even popped into my mind that I was using a linen blend 'cause it was the mockup and not the uber good linen as I was trying a new shirt pattern

I will admit, I have an ancient embroidery sewing machine. It is one of the early models. It is slow

and only does a 4in x 4 in pattern maximum for each hooping. It is faster than by hand, but by no means fast. 58 inch of this pattern and about 50 of the half pattern took me about 10 hours to stitch out. Now to cut and sew the rest of the shirt.

My inspiration - Janet Arnold Patterns of Fashion: The Cut and Construction of Clothes for Men and Women c1560- c1620 , fig 116 ( part of a fresco by Paolo Veronese) and pg.53, doublet of Don Garzia, 4th child of Eleanora de Toledo. Awesome book by the way...
Posted by Nina at Tuesday, February 12, 2008 1 comment: 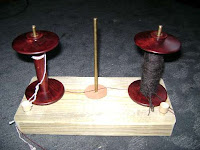 My very handy when he wants to be hubby built me this marvelous tensioned lazy kate. Both my wheels have onboard lazy kates, although the Kromski one is described as bobbin storage in one place. It rather works that way, as storage I mean as it is a bit too rattlely and loose for my preferences in a lazy kate. So I asked hubby and he made up a quick one which works marvelously. The uprights are brass and removeable for storage or travelling. The tensioning device is simply two pegs and some string, which works well for it's simplicity. He thinks we should put a yarn guide on it as he feels it would make it quieter still. All I need to do is stain it and toss a coat of tung oil on it, but of course I had to try it out first. 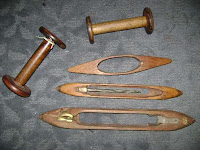 On the weekend we went out to a local antique warehouse place looking for ideas for kitchen shelving. We found none, but instead I did find a few goodies to add to my collection. The small shuttle and the two spools were the bargain of the day in my eyes. The two larger shuttles were found at a flea market last fall for the grand price of $2 each! I've a bouquet of old pirns ( hey, they were 3 for $1, how could I resist!) as well. Now to figure out a neat way to display them.
Sigh, I love old things, old wood and paper-thin porcelain china, especially Lusterware. I guess that is the bit of magpie in me.
Posted by Nina at Tuesday, February 05, 2008 1 comment:

It seems like forever since I've updated this. I spent the weekend at a friends place a couple of weekends ago. We had a lovely time and when my husband picked me up, he informed me that my "new" computer wouldn't boot up or if it did, it just showed the horrible blue screen of death. After much fussing and getting "people" to check it out, after finding out the waiting list to get it just looked at by the pros at the store, hubby decided to install a new hard drive to see if that was it. It was the cheapest and easiest fix he could think of and we could always use a second hard drive if it wasn't the problem.
While this was all happening we found the old computer in a corner and ressurrected it. Slow, ungainly and fussy, I was able to reset all my important bits of info and life went on. The new Hard drive did the trick and I was informed that my computer was up and running again. So happily I started moving all the info over again. Reseting it all in 2 weeks is a pain, but at least it is almost done. Plus boy who bangs the computer desk when frustrated has been given the old computer and hopefully mine will be happy for a long while.

While this was all happening I was working on .... the following....
my Kirtle bodice, which I left at my friends place, although I had wanted to bring it home to handstitch and get it ready for the eyelets and skirt! It is a very lovely shade of corally pink. I've actually got some madder dyed wool that is that exact shade. Reminder to all and especially to self.. when you have small bobbins of obscure coloured thread for a particular project, remember to remove them from your pocket before washing your jeans. I'm still trying to cut the jeans and a shirt out from the spiralled thread! 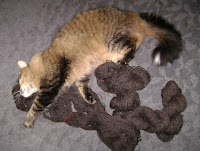 I have also been spinning. "Quel Surprise!" Black shetland wool on my new Kromski. The only thing is that I hadn't been certain what I was going to do with this yarn and started spinning without a plan. I was also watching a hockey game. Since this wheel spins so smoothly, I wasn't really paying attenting. The singles were really thinner than I wanted them to be. By plying I was able to bring it up to about 1500 yards per lb. I was considering weaving it as singles again, but they were pretty thin and without tons of twist, so I plied it. It is fairly soft and looks good plied. The cat likes it.

rafting it from scratch, using his measurements. It has been a bit slow going for a bunch of reasons including; lack of fabric, lack of tested linings, learning curve and the total lack of incentive to clean off the table and make space in my work room to get sewing again. Spinning and planning weaving projects does interefere somewhat too for some reason. The pattern shapes are lovely though. Of course the cat had to investigate as well.
Posted by Nina at Monday, February 04, 2008 No comments: