Between the heat and humidity making me feel more than miserable, not feeling well on top of it and finding K with a sore eye and unable to put any weight on one leg, it's been a rather unproductive two weeks!  For some reason I had this brilliant idea of putting in a new patio sliding door, but nope, instead I'm paying for not one, but 2 sets of X-rays and later today, we'll find out what else we need to do to fix that leg..  We've no idea what he did to hurt it, silly kitten!

I got a bit of knitting done and finished one plane sock, but haven't got the second one on the needles.  With a humidex of 43° C, I couldn't bear to have a ball of yarn and sock sitting on my lap!  Instead I read, read a bit more and then read again. 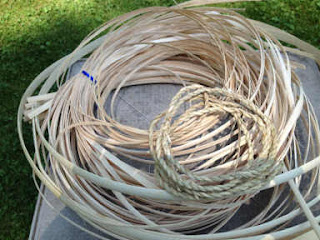 Finally, I dug out a project I'd stashed away before we'd moved.   I'd thoughtfully put the instructions with the actual supplies, instead of in a "safe" place.  Imagine that!  Even with a tub of cold water and a wet pile of reed on my lap, it wasn't all that cooling an activity.  It took several days to get the base to the correct size as it's been a while since I played with these materials.  However, the basket is almost done, just needing the rim lashed on. 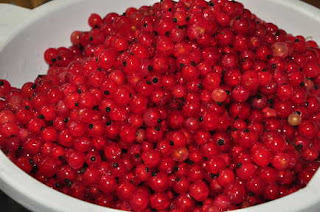 In the past years, the birds or someone/something else got the red currants before I had a chance to harvest them.  Last year, with the weird spring, there were few berries on the bush to begin with.  However when I went out one evening, I realized that there were gleaming red jewels weighing down every branch of the currant bush.  I grabbed a bowl and started picking.   Two days later, I picked some more.  Then last night, I was able to harvest the sparkling, red berries again.  There might even be a 4th picking out there!  Right now though, there is about 2.5 kilos of currants in my freezer.  I looked through my 19th C cook books and I have several Red Currant Jelly recipes from 1808 - 1838, which sound like promising experiments.   Someplace I've read that jelly wasn't slathered on toast as we eat it, but instead, small spoonfuls were eaten as a sweet! 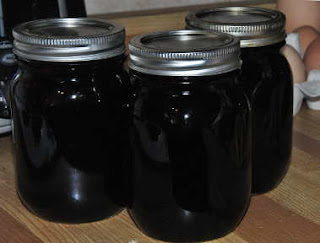 I did make jam though.  We had to clean out the freezer to make room for the incoming meat birds.   I found a bunch of frozen blueberries, which I turned into a very yummy jam.  This year, instead of crushing the berries, I pulsed them in the food processor.  The blueberry flavour in this jam is much more intense than previous batches.  I think perhaps the food processing released much  more flavour, enough so that I'll try it again.  Of course, I also managed to finally kill the food processor too.  The poor bowl was falling apart and finally the stress cracks on it, stressed too much and it popped apart, luckily after I'd scraped it clean.   It was well over 10 years old and a cheapie at that and quite well used, so it isn't sad, just that the timing was bad.  I have enough blueberries for another batch of jam but will wait until the right machine goes on sale, before I make the next batch. 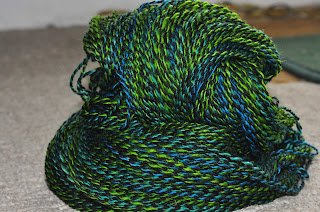 I ended up spinning up the black merino to ply with the summery blue green singles.  It does change the yarn from light and airy to brooding like a stormy sea.  However, I couldn't think of what I'd make with that bright summery yarn and this yarn inspires me.  I can imagine wrapping myself in a shawl with this! 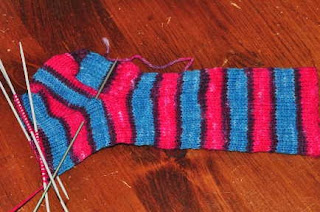 I had a nightmare the day before I left for Olds, that I had been knitting on the plane and dropped one of my double pointed needles and it rolled under a seat where it was unretrievable.  So I dragged my sweetie out to get two short circular needles in the same size as I'd use for socks.  They worked just fine for the plane and there was no possible way I'd drop a needle, so that was a relief as well.  However, I really didn't enjoy knitting the socks on the circs, so the next time I picked up my knitting at home, I switched to my normal dpns.  I got hardly any knitting done on the westward bound trip as not only was I tired, but I had a lovely chat with the lady sitting beside me.  She nicely kept me occupied during the bit of turbulence and the landing, which was  one of those things I'd forgotten about flying.  The eastward bound trip home was another story.  I got to knit from take off to almost landing.  I got most of the leg done, did the heel flap, turned the heel and most of the gusset done as well!  Most productive.   The gal beside me very kindly showed me how to use the television when it was accidentally  turned on.  I had to thank her but say that I didn't actually want it on as we don't watch t.v. at home not did I want to watch it on the plane.  She just looked at me, turned on her own t.v. and plugged in her headphones for the whole trip.  I was happy I had a good solid block of knitting time, without distraction. 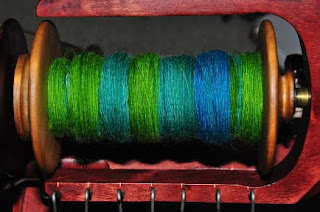 I tried starting in on my homework right away but couldn't quite get into the routine yet.  Summer is too fresh and new, so I dug up some roving that I'd dyed at the same time as the above sock yarn.  It looks very summery to me, all fresh with lush greens and sky blues.  This is all there is, not enough of it too make a huge dent in time, but enough to be a more than pleasant diversion.  I'll have to spin up something to ply it with.   I have black and white roving which would be suitable.  I could blend for a grey but I fear that would take away the summer feel, but so would black.  White might be too stark and I'll have to purchase some new acid dyes if I wanted a colour... Oh decisions, decisions!

We've had lovely salads almost every day from the garden since I've gotten home..  Over night the spinach has bolted and gone to seed, but since I'd pretty much stripped every last edible leaf from the plants, it's not like it was unexpected.  I'll rip it out as soon as it dries out a bit and plant mesclun mix and arugula in its place.  The leaf lettuce is going strong.  I also harvested and froze in little ice cubes, a whole whack of basil.  There will be more to harvest again tomorrow or at least on the next sunny day.  The garlic will be ready to harvest in another couple of weeks, the tomatoes have flowers and some are even starting to bear tiny fruit.  Just before I left for Olds, I noticed 2 volunteer zuchinni plants that were doing better than the ones I'd planted.  I weeded around them and left them to grow.  They are flowering and starting to fruit as well!   There are flowers on the blackberries this year!  Soon to be yummyness!!!!!   The biggest issue in the garden right now is will it stop raining for a few days, to allow thing to dry out enough to avoid any blights and mildews.

A pictoral of the gardens at Olds College 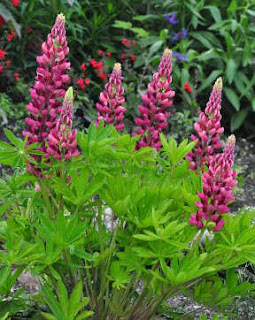 As I was packing for Olds, I realized that my plan to put my camera bag in my carry on wasn't going to be feasable.  The camera bag was just a tad too large.  So I decided on a single all purpose lens, the 28-105 kit lens and shoved the naked camera in the carry on, surrounded by clothes and other soft items.  Coming home, it was well surrounded by fleece and fibre, so it traveled safely, despite the lack of it's normal cocoon.   However, it is a big and slightly heavy camera and without protection from the elements, I only dragged it out once.  The rest I took with my phone camera, which did an admiral job, all things considered.  Next year, I'll actually get scenery photos though :)

This photo was taken with the big gun, the rest with my little phone camera.   I found out after I got home that the phone has a panoramic view setting, which would have been an awesome bit of info to have figured out ahead of time!   Next year... 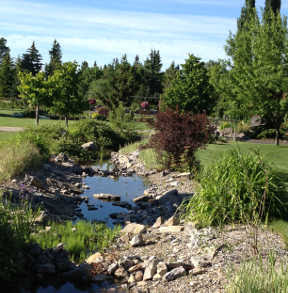 Olds College has a huge campus.  The accomodations are at the one end of the campus and the classrooms were at the opposite end of the grounds.   In order to get from one place to the other, we had to walk through the botanical gardens 4 times, each and every day!  What a hardship that was!  (not so much )

The grounds are spectacular.   There are water features, wet lands, native perennial gardens, pristine gardens, gazebos and more.   This is one very welcome sight we passed by every time we walked back to the townhouses, where we stayed. 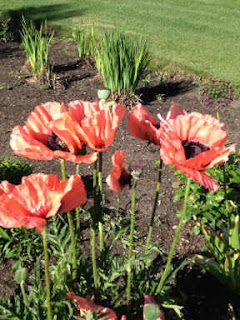 I was quite amazed at the flowers in bloom.  I don't know if the season is later this year, or if the substantial distance farther north than we are shortens their season that decidedly.   Regardless, I got to see their Poppies open and bloom on my daily walks.

As well, plants that I would have considered to be earlier or later here, we in bloom at the same time. 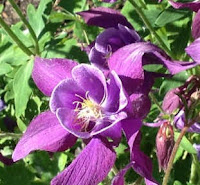 The Colombine was in full bloom at the same time as the poppies and a number of different Gloriosa Daisy types.  I don't really know what they were, but they had that daisy look and were very pretty. 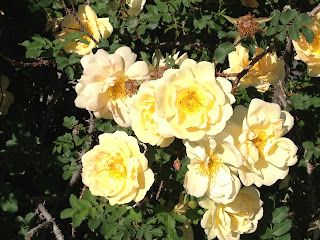 There were Roses.  What would a trip to Alberta be this time of year without wild roses?   This yellow rose bush was taller than myself and absolutely covered in blossoms.  There were more bees keeping themselves busy around it than I've seen in the past couple of years here!  It was stunning! 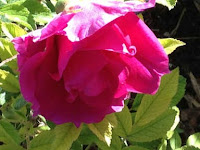 There were cultivated roses as well.   You could see that they were planted so that something would be blooming over a long period of time.   The colour of this rose was so incredible. 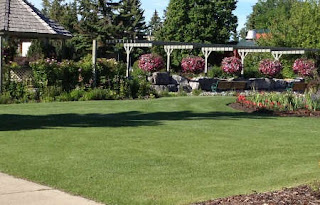 A gazebo with a covered walkway, this time totally covered with annuals in full bloom.  What rampant colour there was absolutely everywhere.   I'm hopeful that now that I've experienced it once, I'll be savvy enough to drag my camera out more frequently to capture the rest of it rather than walking around rather awestruck, as I did.