Inkle straps and finishing up the grey wool 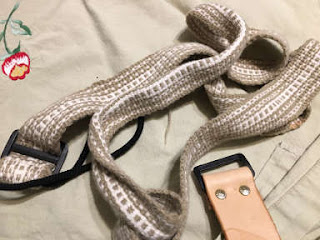 I received a banjolele or banjo-uke for a fun Christmas pressie.    I know a lot of people don't use a strap for a regular uke, but I was finding the bracket hooks kept pushing uncomfortably on my arm.   So I had a strip of inkle woven strap that I'd made for a mandolin strap, but never finished.  I turned it into a very effective banjolele strap.  However, Kevin, naughty cat that he is, decided to muck it up a bit and I had to wash it.  It came out fine, besides needing a good pressing.  However, it shrunk up a bit and the strap is just a tad too small width wise now. 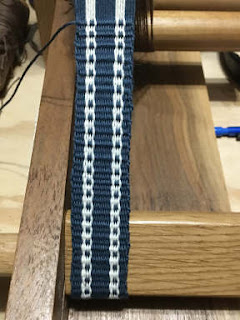 While I was deciding whether to re-weave it or not, I remembered that I still had to make the strap for the Hedeby bag that I'd made last fall.  I had used a makeshift strap from a piece of tablet weaving, which was white and green, totally the wrong colours and way to thin.  It looked ugly and was uncomfortable to wear.   I realized that if I didn't just make the darned strap now, time would get away from me and it might never get finished.

I used 4/8 cotton because I had it on hand.  Since this strap would likely touch my neck, I didn't want to use wool.  The wool that I'd spun up, which would be comfortable to wear on tender skin areas, wasn't nearly strong enough for a strap, nor for inkle weaving.   The wool that I have, which was suitable, is to rough for me to want to wear in an area which might rub.     I wanted to use a tan, like the bag I'd woven, but 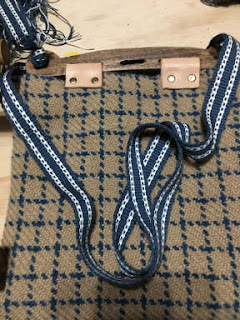 I didn't have any in the right weight and I really wanted to use what I had on hand.   Instead I used a natural cotton and a dark, denim blue.   I warped up the inkleloom yesterday and finished just after supper today, with a strip of tape just under 3 yards long - 105 inches in total.    I could have gotten a few more inches woven, but a warp thread broke and really, it wasn't worth fixing it for another 2 inches of tape length.  I attached the tape to the wooden bag handles, by threading it through the appropriate holes and tying an overhand knot.

It looks a tad short, but it isn't.  The handles rest nicely on my hip and when it's open, I can reach in and touch the bottom of the bag.  I absolutely hate it when I make my bag strap too long and I can't reach in without lifting it up.   The best is that it is very comfortable to wear too. 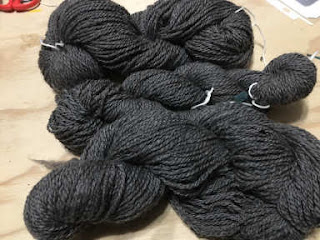 The grey superwash, spun and plied.  It's a lovely worsted weight.  The colour is a rich, charcoal colour, which will be very useful.  I've no idea what I'll use it for though, so it's into the storage bin with it. 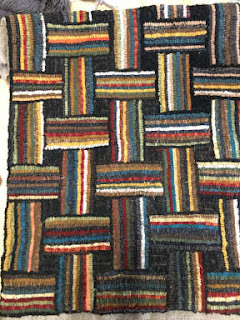 I've finished the hooking part of the basket weave rug.   I'm quite happy with it so far.   I still need to steam it so it's flat.   Then I will baste a cord wrapped in the backing, around the edge of the rug.  The final steps are to whip stitch wool yarn around the edge to cover the cording and backing, to give a firm finish, which will frame the rug.

I don't have the yarn yet, which will likely be black.   I was thinking about spinning it.  It won't take a lot, maybe about 150 yards.  But it will have to be dyed.  The fibre that I have which is suitable, is still raw fleece, so it will need to be washed.   By the time I've washed the fleece, let it dry, worked out the calculations to spin it to the necessary twist and grist, and then spin, ply and dye it, spending the $7.45 for the single skein of yarn that I'd need, seems to be an easier solution.

I'm happy with the rug though.   Now to find a local dealer for Briggs and Little yarn, Regal weight. 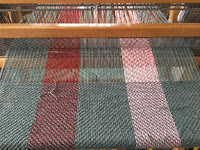 This is the end of the blanket project which is on the loom.  I wove this blanket it 2 halves.  Because I only have 4 shafts and my loom is only 36 in wide, I can't do a twill double weave project.   So if I want to do a twill blanket, I weave it in two long strips and stitch them together.    It's not really sewing it together, it's more like running an extra warp thread down the middle, picking up the little loops along the selvedge, where you reverse the weft.   It's easy and takes only a long thread of warp and a tapestry or darning needle.

My finger is on the seam.  Despite the bit of extra bulk at the selvedges, it's still really hard to see.

I thought that I wove the blanket halves to 95in, knowing there would be a lot of shrinkage when it first came off the loom.  Obviously I wove the first half to only 92 inches because the second half it a few inches longer than the first.    It's an easy fix though.  I'm joining the two halves together first.  Then I will pull a weft thread where I want a cutting line to even up the two blanket pieces.   I'll then stitch along the blanket side of the little gap to secure the threads before cutting the extra off.

I hem my blankets these days, rather than twisting fringes.   If I were to sell blankets, I'd likely twist the fringes as people seem to like the look.  However, I want my blankets functional and I find the twisted fringes get in the way.  They tickle chins and noses, get caught up in fingers, and other things and of course are the perfect cat toys.   Hems are far more utilitarian as far as I'm concerned and I'm willing to give up a pretty finish in order to not wake up with a fringe bit caught up where I don't want it. 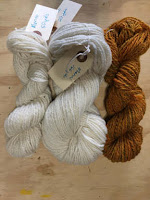 Over the holidays, I did a bunch of spinning.  The small orangey skein is some pumpkin coloured fibre I spun a while back.   There wasn't a lot of it as I was just playing with colours, so the skein is small.  The white is Merino, very fine and very soft.  It was the end of some sliver that was leftover from another project.  Most of this was spun with a long draw.  I really should have carded it first, as the sliver and fibre was old and a bit compacted in places.   The resulting yarn is a bit uneven in places, but still soft, springy and will make awesome mitts or a hat. 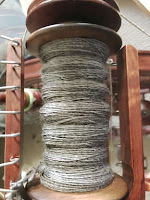 I've started into a bag of grey superwash merino.   I'm guessing there was about 100 g or so, but I didn't weigh it first.  This is the second bobbin and I'll be ready to ply it soon.  It's rather nice because the colour is a bit variegated and interesting to both spin and look at. 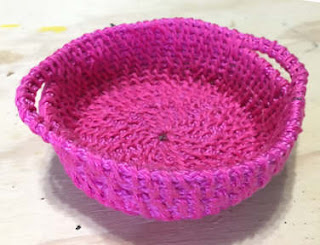 The guild is looking for ideas for an upcoming class.   We have had suggestions of pin weaving jewellery, cute woven buttons and stick weaving.  Here is my contribution to ideas, which is a coiled basket.   If it were in the late summer or early autumn, I'd have used either ditch lily leaves to make cording or tried to find a bale of Timothy hay, which would also work well.  However, they are wet project materials and ours needs to be dry, so I used para-cord for this one.  I had this small 1/4 in size on hand for this sample.  I tried most of the feed stores and hardware stores locally but I couldn't find larger  hemp or even jute rope around anywhere.   I have a larger poly braided cord to do another sample at some point.  This little basket took about 3 1/2 hours to finish. 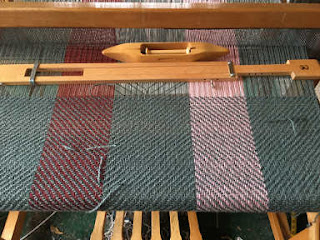 I've dressed the loom with a wool warp in a simple herringbone twill.   It will become a blanket.   Because it's a twill and I only have 4 shafts to work with, I'm doing the blanket in halves and will join it in the middle.   The red stripe was a second choice.  My first was a lighter blue, but it turned the other colours were just a tad thicker in grist.  It felt odd as I was winding the warp and it was easier to just switch out the colour that try to figure out if it would work as is, or did I need a different sett.  This is a couch blanket for cooler evenings and for the kitties to sleep on.