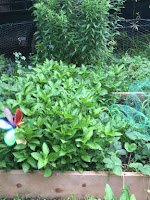 I started the Japanese Indigo seeds in February, in hopes of getting some seed.  I planted it in the garden a bit early, putting it under plastic cloches from the dollar store.   I planted a couple of plants without the cloches to see what difference they really made.   The Indigo plants under the cloches were definitely happier, with more growth, larger, and noticeably more lush.   This enabled me to do a small dye vat the other day.   I cut 550 g of leaves and stems.   I took some of the leaves from the stems, but I'm not horribly careful about it.  It's a lot of extra work and I don't think it makes a lot of difference. 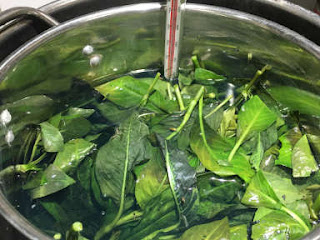 I set up a double boiler system with my dye pots, putting some water in the larger one and then setting the smaller one inside it.   This makes it much easier to keep the Indigo leaves from getting to hot.    I put the leaves in the pot and filled it with lukewarm water.   I use a candy thermometer to keep an eye of the temperature.   It needs to cook for about 2 hours, getting up to about 160° F, and no higher than 180° F. 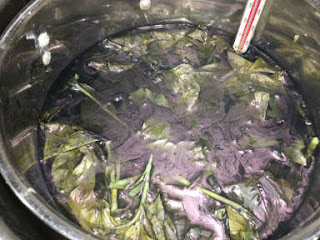 When the temperature gets warm enough and is there for a bit, the leaves start to look a bit wilted and a scum forms on the top.   This is a good thing as you know the pigment is being released.  The scum is a brownish colour, sometimes with a bit of blue or green in it. 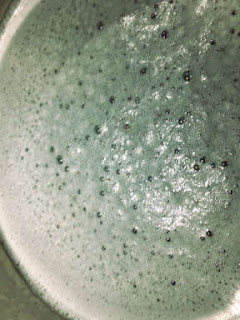 When the 2 hours of cooking time is up, it's time to drain the leaves into another pot.   Using rubber gloves, squeeze the hot leaves to get as much of the brown liquid as possible.  They are really hot, so I take very small handfuls, which are easier to squeeze out anyway.    The remaining leaves can be boiled up for a second colour, but I`ve only ever done that with Woad leaves.  Because the Japanese Indigo has so much more pigment, I`m usually ready to clean up when I`m done with dyeing blue.

Anyway, take the brown liquid and add some soda ash or baking soda.  You can also use ammonia, but it smells.  Baking soda works just fine.   Then you need to aerate the liquid by either pouring it back and forth between two buckets, or I use a dedicated stick blender.  It`s permanently dyed blue, so easy to know it`s not for blending foods.

When I`ve aerated the liquid from Woad plants, I usually get little specs of dark blue sitting on top of the foam.  With the Japanese Indigo, the foam often just goes a pale blue, greenish colour. 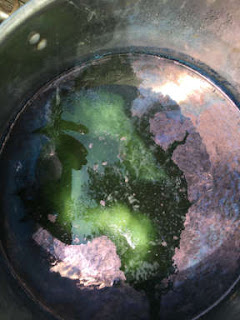 The final step is to add a reducing agent.  I use Thiourea Dioxide (Thiox).   It`s neat to watch the foam break down and disappear almost immediately after adding the chemical.  You can use spectralite as well, but thiox is available more readily around here.

You need to let the vat sit for a while while the air is worked out of the vat.  A metallic looking scum will form on the top and the vat will turn green or greenish brown when ready.

I had put some fibre in a tub to soak part way through the initial heating time, so it had been soaking for over an hour.   I put it in the vat, let it sit for a few minutes and then pulled it out, carefully squeezing out the excess liquid near water line, just as the fibre came out of the dye.  This supposedly helps eliminate excess oxygen getting into the vat.

It comes out green and as the air hits it, it starts to turn blue.   If you want darker colours, you need to use multiple dips with airing time in between each dip.

Eventually, I ran out of fibre and the vat was giving lighter blues, taking several dips to get to where I wanted the colour.    Indigo doesn`t need a mordant.  Although it is a little bit of a fussy process, it`s fairly simple if you follow the steps put out in most of the natural dyeing books.  I like Rita Buchannans  A Dyer`s Garden.   Look at the pretty blues! 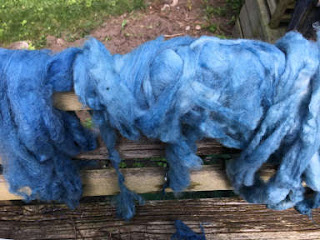 On our way home from Nova Scotia, when we stopped for gas, we saw this happening in the field beside the gas station. I grabbed the camera and left Al to fill up and find me in the crowd of people who had stopped to watch. 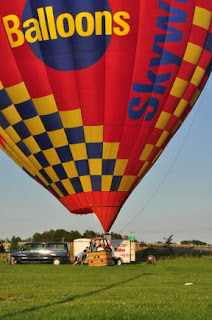 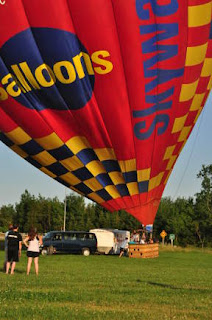 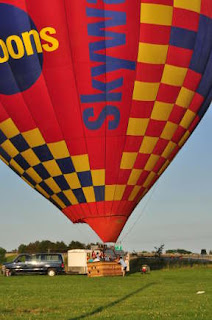 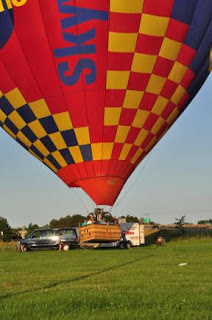 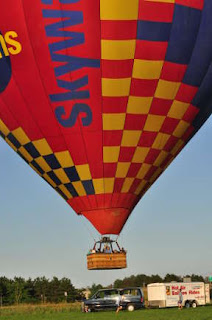 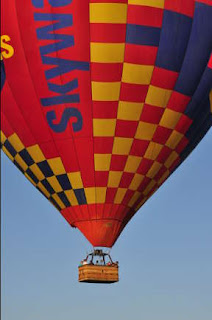 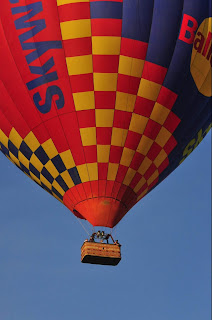 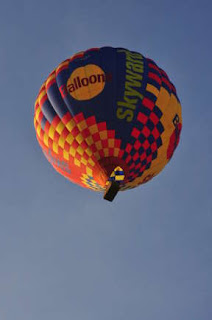 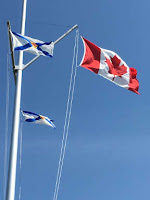 We packed up our cute little car and headed east.   We'd considered flying out but as this was really a bit of a last minute plan, it wasn't affordable, so we added a couple of extra days for driving time.  It was stupid early when we left, but it was still hot and sticky.   It was a hard first day, when we drove all the way to Edmunston, New Brunswick.   Lots of highways, and since it was the Canada Day weekend, lots of traffic, although it turns out that there was more coming home.   However, we were very thankful to finally arrive at our motel that night.

We got to Halifax the next afternoon,where we plunked down for almost a week, using it as our home base.  It was a good location for where we'd planned out trips, it wasn't so good for evening explorations by foot, as it was in an industrial park at the edge of the city.   Next time, we'll either take the tent and camp, or find a small motel in a rural setting. 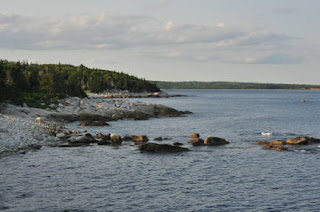 When we arrived it was quite cool in comparision to the temperatures we'd left.   Plus, the first day there it rained.  I was so thankful that my fall/spring jacket was in the car.  I'd probably dragged it out with me one day, when the weather was unpredictable,not needed it and forgotten it for weeks.   However that day, it was brilliant to have as I stayed both warm and dry.

We started our Canada Day at Ross Farm, in New Ross, an open air heritage farm museum.  It was green and lush.   There were a number of buildings including the original farm house and barn.   We were early and there were few people there yet, so the first couple of interpreters we had were spectacular.   We had an amazing conversation with the gentleman who was in the barn and the man driving the matched pair of Canadian horses knew so much about both the breed of horses, area farming and the Ross farm itself.  The cooper was extremely knowledgeable about barrel making and the barrel making industry at that time.   It made for a fabulous morning!   We headed back to the hotel, and took the ferry from Dartmouth to Halifax, wandered around a bit, decided not to stay for fireworks and instead, went to dinner and had an early night!

The next morning was the Lighthouse Route and Peggy's Cove.   We'd been warned that while Peggy's Cove was spectacular, it was often disappointing because of the crowds.   We were fairly early and people were just starting to arrive.   If I were to do this again, I'd head out even earlier, or go later.   It was however, not disappointing in the least.  The scenery was incredible and so different than what we'd seen the day before.  The area is rugged and set on a huge outcropping of granite rock.   You can see out over a huge area and it is spectacularly beautiful.

We took a day to head out to the Annapolis Valley and went to the Look Off.  You can see right across the valley to the Bay of Fundy.  We'd hoped to see the Tidal Bore but our timing and the tide's timing didn't match up in any way and it wasn't really feasible to get there for the tide times.   Oh well, next time.

It was an amazing trip.  Highlights included the Rug Hooking Museum, which we found by accident, and which had an absolutely phenomenal display of both antique and modern hooked rugs, and the friendliest people working there.   The scenery everywhere was spectacular and so different from one area to another.  Lunenburg was the prettiest town, so colourful and unique.  Mahone Bay was picturesque in a more modern touristy way, but still pretty with lots of little boutiques and shops.

The scenery everywhere was amazing.  After the cool Canada Day, the weather warmed up to comfortable temperatures and by the end of the week, it was crazy hot.   We actually abandoned our walking tour of Halifax half-way through, went to the motel, changed into our swimsuits and hit one of the beaches where we paddled in the Atlantic Ocean.

I will say for sure that I didn't get to stay long enough.  It may be the only time that I've ever said that, as I'm usually quite happy to head home.  We did take an extra day to get home, which made the trip much less exhausting.  While I was happy to get home, it was definitely too short a trip!  I'd happily go back again. 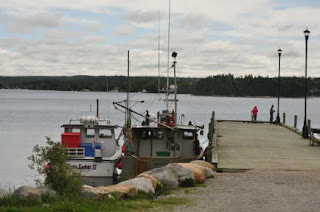