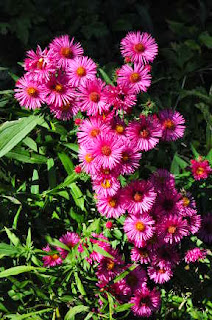 These Fall Asters  are simply beautiful.  Each night they curl up and the next morning, they are fresh and bright.  These aren't the wild fall asters which grow in our area, are a lovely soft purple and are as hardy as anything.  I'd love some of those as well.   I do love the vibrant pink though.  They've bloomed steadily for several weeks now. 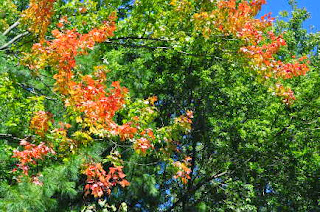 Autumnal colours are starting.  For a couple of weeks now there have been hints of colour in the trees.  Now it's starting to be unavoidable.  You have to go a bit further north to get absolutely fabulous colours in the leaves but all things considered we don't do too badly. 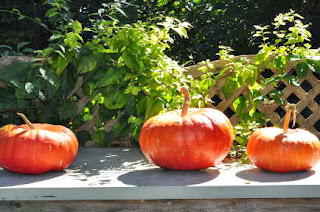 Pumpkins from the garden.  They are Vie d'estampie, which is a variety I've not grown before, at least not with any success.  However these 3 will tell if they are as delicious as I've read about.  If so, I'll grow them again.  If not, I'll probably go back to the standard Sugar Pie, which is sweet and delicious. 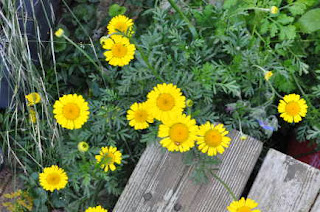 I've tried for several years to get Golden Marguerite (dyer's chamomile) established, with no luck.  Last fall, I simply scattered a few seeds about and then in the spring I also started some seeds to plant out.  The scattered seeds germinated and bloomed all in one summer!  While they're supposed to be a short lived perennial, they are quite hardy once established.  They do tend to give a lot of bright colour all summer long.
Posted by Nina at Sunday, September 29, 2013 1 comment: 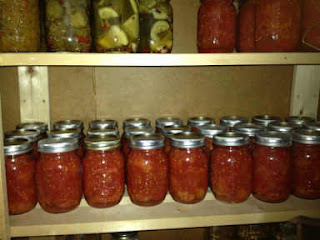 On the Friday of Labour Day weekend, I picked up a bushel of tomatoes, some extra lemons and a couple of dozen jars.   I spent two days canning tomatoes.  I misjudged on the jars though.  I needed to send someone on a jar run as I just didn't have enough with all the jams and pickles I'd made this year.    I had thought 2 dozen would do it, but needed what I figured would be an extra dozen jars.  We picked up an extra 2 dozen just in case and it's a good thing as I needed one jar out of that carton for the tomatoes.   Since the tomato harvest is down this year according to the news reports, I'm glad to have at least some in the pantry. 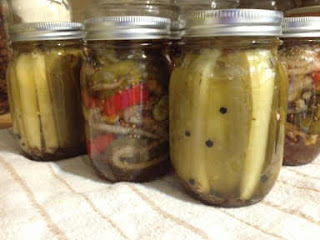 On the Monday, I stripped the garden of all the cucumbers and made more pickles, both garlic dills and bread and butter pickles.  We should have enough for most of the winter now.  The dills I did in spears instead of chunks.   The bread and butters have red pepper, lots of onions and some cauliflower in them to make up for the fact that I was just a bit short of cucumbers.   Several older recipes I found called for the addition of cauliflower, so I decided to try it.  We sampled some from the first batch and they were pretty darned good.  Not nearly as sweet as commercial bread and butter pickles and definitely hotter, due to the addition of a nice little shot of chili pepper flakes.  The second batch doesn't have the hot pepper in it.  I figure we can compare and decide which we want next year but it sure was an easy way to get that "heat" fix without having to whip up a whole meal. 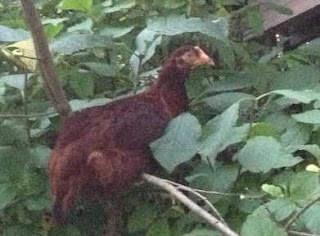 When we shipped the meaties, I moved the new layers into a larger, brighter pen in the coop.  This one has nice roosts and layer boxes and would make a nice home for the girls.  However they had other ideas.  One night I found one of them  out of the pen, in with the older girls.  After shooing her back into her pen every morning, there were two out with the old girls.  Of course, 3 nights later, 3 of the 4 were out with the older girls and I was still scratching my head trying to figure out how they were getting out.   They were staying in the pen all day though so I wasn't horribly worried.  Then a day or two later, I went to feed the chooks and collect eggs and two of them were outside.  Sigh.. I opened the door and let them all out that night and merged the two flocks instead of keeping them separate.  I think I've figured out how they got out but it's too late.   The good thing is that they tend to feed themselves and hardly eat any grain at all.  The bad thing is that the girls were still skittish and one of them won't roost in the barn.  She's chosen a lilac bush just outside the barn door.  However, she'll either get eaten by a predator one night or freeze if I can't get her inside before winter sets in.     I'm not sure how to fix this since she's still pretty wild.  The others come up to me, hang out with the rest of the flock and do the normal chicken flock behavior thing, but this one keeps her distance, spends time alone and doesn't seem to mind being caught out at night in stormy weather.