The end of many things

A stupid spammer hit my blog comments so I had to change some of the settings.  My apologies if it's a bit inconvenient, but spammers... ugh! 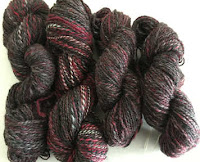 The Weaver and Spinner guild challenge for the winter and spring was to choose a holiday card, take some colours from it and make something.   The card I received from my daughter this year was white with black and red.   As I didn't have any black thread on hand, I chose to spin instead of weave.   Here is what I came up with.  Black, Red and white Merino, carded into rolags and spun with a long draw.  It's a fluffy, airy yarn.  It was a fun project. 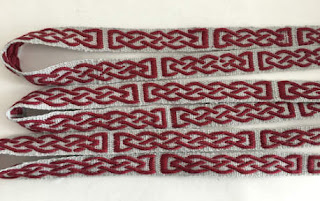 I cut the pickup inkle project off the loom at 84 inches.   I could have done another 10inches maybe.  It would have taken a bit more effort for iffy results.  There is a lot of take up on the grey, skinnier threads and not quite as much on the thicker red threads.   Every once in a while, there was a hiccup in the pattern and the non-picked up threads would show in the wrong place, or pop up where it shouldn't and that was despite re-weaving it.  By the last couple of repeats, it was obvious that the tension differences were just becoming a bit of a regular issue when weaving.   So, instead of letting myself get frustrated, I chopped it off the inkle loom.   This is not a project to get frustrated over. 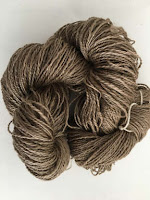 The ramie is spun and plied.  I have a bin for my spun cellulose fibres.  This includes cotton, linen, ramie and bamboo.  One day, I'll have enough of any one of those fibres to weave something.  Until then, I just keep tossing in spun skeins.

I'm whipping the edges of the hooked rug and I'm looking for a new project.  Hmmmmm, what to do next?
Posted by Nina at Saturday, February 29, 2020 2 comments: 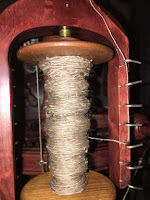 I've some Ramie top on the wheel right now, in a lovely colour called earth.  It's a really nice brown and because it is ramie, it has a bit of a sheen.   This top has been really nice to spin, although when I stopped last night, my non-drafting fingers (the ones holding the fibre) were black with either dirt or excess dye.  Still, the yarn should be quite nice when done and any dye or dirt will get washed out when I wet finish it. 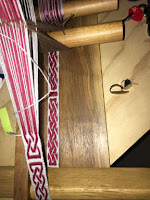 I'm still plodding away on the inkle loom with the pick-up pattern.   I did the math and I still have 2 weeks to go before I finish, if and only if, I manage to do my 3 inches a day.   I'm guessing that there will be a few days it won't happen, so it will likely be closer to 3 weeks. 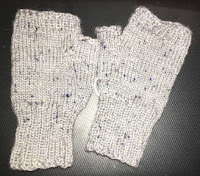 I had a single skein of a white tweed yarn which was exceptionally ugly.  It was bright white with some dots of colour and it looked totally wrong.  I dyed it a grey which in reality is a bit darker than this photo.  I started making mittens with it.  The first mitten was almost done but every time I looked at it, I saw fingerless mitts instead.   I ended up ripping back the first mitt and changing it up.  There are a bit shorter than I normally make fingerless mitts.  I usually like them to come up past my knuckles, to keep my fingers warm.  However I've found that when they are that long, they don't lend themselves to activities like spinning or playing the banjo.  So these shorter ones allow for those sorts of activities easily. 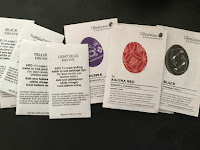 I need to set up a Pysanky work station, so I can start on Easter Eggs this year.   My daughter was in the city, so she stopped by the shop and picked up a few dyes that I needed.  There was a new brand out, the same price as the basic dyes so I got her to get a few so I can sample them for differences.   I'm wondering though if they are just the traditional dyes, repackaged.   Different colour names, all with a Canadian cultural theme, but with the similar price point and a similar colour selection, it could be the same dyes, in a different envelope. 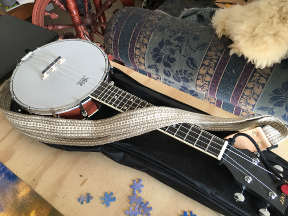 The banjolele strap is all fixed up, reassembled and re-attached to the uke.    I ended up shortening it after washing it up because it really was too long in the first place.  It seemed sensible, since I'd already had it taken apart.   I decided that I could live with the small amount of width shrinkage from the washing as once assembled, it didn't slip in the hardware. It works fine, and there are no ill effects from Kevin's mistreatment of the strap.   I know you're supposed to hold a regular uke in your arms while you play, but the hooks on the head of the banjo-uke press into my arm making it uncomfortable, plus it's a little heavier.  The strap makes a huge difference in comfort. 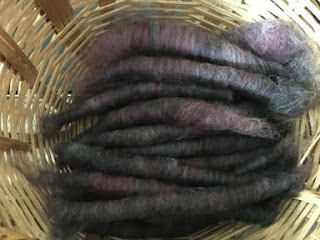 We had a weavers guild challenge to bring a greeting card or Christmas card to a meeting and then decide on a project using some of the colours in the card.  The Christmas card I had was black, red and white.  I didn't have any black thread in the cupboard, and wasn't going to order anything in the near future, so I decided to spin instead of weave.  These are some of the rolags that I've carded from black, red and white merino.   It's spinning up into a rather nice, subtle, tweedy yarn. 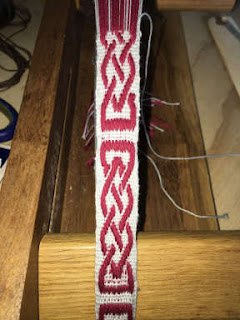 I warped up the inkle loom to play with pick-up.   I'm using 2/8 cotton for the ground threads and 4/8 for the pattern threads.   Right now I'm managing about 3 to 3 1/2 inches an hour.  My loom weaves a band about 108 in long, so it's going to take a while if I decide to finish the entire band.    It's not difficult though, but definitely fussy.  It requires much counting, so it's not like a plain weave band where you can chat, or watch a video or something, while weaving.  This band requires concentration and about 35-40 hours.

We have a guild with a bunch of super-enthusiastic beginners this year.  I know if I use it for show and tell, someone will say I should sell stuff like this.   But really, if it takes 35 hours, how much would I have to sell it for to make it worth my while?  and Who in their right mind would pay that much?  LOL!!!

In other news, the blanket I was working on is stitched up, 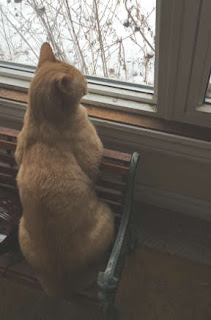 hemmed, wet finished and how in use.   It is cozy to cuddle up under and when there is a nice day outside, I'll drag it out and hang it on the line so I can photograph it.  Right now though, there are 3 cats curled up on it, which is the best seal of approval.  However it also means I can't access it to take a photo, without getting those same 3 cats ticked off at me.  I figure while they're sleeping, they aren't getting into any mischief and that's a win in my opinion.

This is Phil looking out the window at something moving about outside.  He enjoys looking out, but he doesn't really want to actually go outside anymore.   He seems to be happy in his warm, safe environment, with lots of food, water and cuddles.