Back after Camera difficulties

I had horrible issues with my camera.   It would only take dark, under exposed photos.  It was horrid and it was frustrating because I can't afford a new camera and it's likely not worth repairing this one as it's pretty old.    I ignored it for a while.  Today, I took it out again, fussed with a few things, still no luck.  Then I tried it with the flash -  worked perfectly... without the flash, too dark.   It turned out, it was a stupid dial that I was moving by accident.    Sheesh... talk about operator error of the stupidist kind!   As okay for photos as my phone camera is, it's not really good enough for a lot of what I like or at least usually need to photograph. 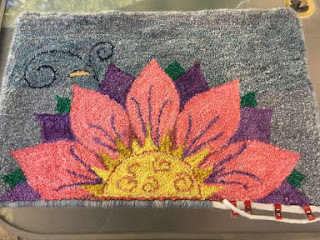 This is the almost finished - it's now completely done - traditionally hooked rug that I made with my handspun, hand-dyed yarn.    I'm really happy with it.  I learned a lot, and for a learning project, I think it turned out quite nicely.   Some areas are over packed, and learning how narrow lines work was interesting.   I was going to put a border on it.  While I started it, I wasn't sure I had enough yarn in the colours I wanted, and since these colours were one offs, using up old dyes, I opted for the smaller rug, to be certain of having enough yarn. 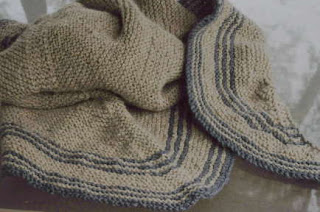 Before we left on holidays, I started this shawl.  I knitted a few rows in the car and hotels each night on the way down.   I knitted some while we were in Nova Scotia and then on the way home, despite my issues with motion sickness, it was a godsend.   It started to rain the moment we hit the New Brunswick/Quebec border and was scary, torrential downpours until just outside of Montreal.   I got a lot of knitting done in those hours.   I wasn't driving ;)

It's a simple shawl- Danish/Icelandic style wrap shawl in garter stitch.   Perfect for keeping the hands busy without a lot of though.    I just finished it a couple of days ago.  The thing is huge.   It's warm and cuddly though. 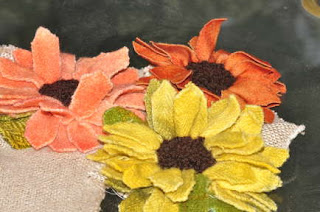 I had some scraps of handwoven wool fabrics that I ran though the washer to full up.  They fulled up more quickly than I'd expected and more than I'd wanted.  I set them aside until a couple of days ago.   I dyed them up in yellows and oranges.  The greens were blue fabrics to start with.    I've started making some proddy hooked sunflowers.   I wish I'd dyed more yellow fabric though.   It makes for pretty flowers.   The centres should be larger, but I'm using scraps of linen hooking fabric up and they are only about 4 inches wide, so this is about it for flower size for these ones. 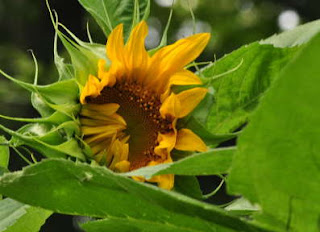 Here is a photo of a sunflower from my garden for comparison.

I've been working on a rug warp.   I dyed it to get the colour I wanted because I'd bought a whole whack of natural coloured 4/8 cotton a couple of years ago.   Now I need to wind 22 more threads of the white stripes, because I managed to miscount the first time.    It's an easy threading project though as it's only 27 inches wide and there are only 2 rugs to weave in this warp. 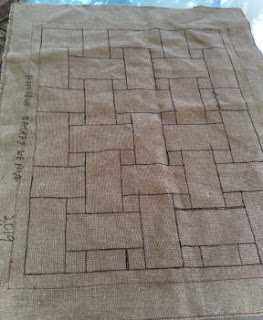 This is the new pattern I've drawn up for a hooked rug.   I saw pictures of several antique rugs using a similar basket weave design, though many of the rugs were quite large, mine is sized for a mat.    I had some bristol board marked with a grid, and just used a straight edge to draw out a pattern in a scale which looked suitable for the rug size.    I had linen rug hooking backing for this project. I didn't however, have any red dot or any other tracing type material for drawing the pattern on the linen.  I'd cut out both pattern pieces, and was going to trace them onto the backing.  It turns out, I didn't need it.  The backing is quite an even weave.  All I had to do was follow the lines of the fabric with my felt tipped marker, checking the sizes with my pattern pieces.   I spent way more time trying to figure out how to do this, than the actual time needed to draw out the pattern this way.   Once I realized that I didn't need a straight edge or pattern, it just seemed to happen in no time at all. 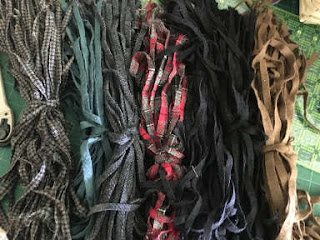 Strips of wool for hooking however, are taking forever!   First I had to hunt down fabrics.   There was no suitable wool available in local shops.   I had some in my stash, which I raided.  I had lengths for tunics but not enough for 1860 skirts, so not needing a new wool tunic, I took a half yard from each length.   I had some scraps too.  I also found a couple of short wool skirts and 2 wool mens jackets in the thrift stores.   Men's jackets are a bit expensive and have a lot of waste, as only the sleeves and parts of the front are useful, but they have a good range of patterns and fabric weight compared to the skirts.   I wasn't able to find any old, old skirts, which would have been longer and slightly heavier.  But since everything needs to be felted up anyway, even the lighter weight skirts were usable.

I wanted to use a #6 cut, but that is 3/32 in.   I don't have a cutter and the rug hooking guild doesn't meet in the summer, so I've resorted to using a rotary cutter.   I tried measuring it out, ended up with 1/4 inch, which is about an 8 cut, but most of it is slightly wider because the wool seemed to spread under the ruler.  In the end, I am just eyeballing it and my cuts are closer to the size I want.

It takes approximately  4 times the amount of yardage as the area of the space you need to fill.   It feels like I've been cutting wool strips for days, but I think I have days more cutting to do.  I figure that right now I've only got enough strips to fill about 1/4 of the rug.    I can see why people hook with yarn rather than wool strips.    One snip on a skein and you've tons of yardage cut.

I'm using this rug as a demo project for when I'm at Westfield.  I think it will be an easy project to pick up and put down without worrying about mistakes.  There isn't any shading, difficult bits to hook so showing people how it's done, will be easy.  The plus is that when it's hooked, every rug I've seen was pretty impressive looking.

Just a warning, I found some fabrics in the wool department at a local store, but they don't full up or felt and I'm pretty sure they are not natural, or at least a crazy blend.   I also found out that manufactures can label their wool as 100%, but it can have 10% of other fibres in it.   This really affects the way it felts up or doesn't felt  when you wash it.
Posted by Nina at Thursday, August 01, 2019 2 comments: