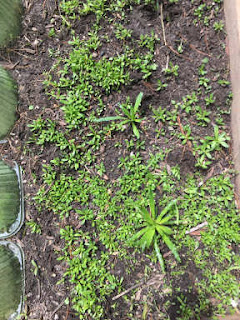 This is my newish Weld patch.  I planted it last year with a little tub of plants dug up from Shannon's garden.   One of the plants was tall and she didn't think it would survive.  It did however, and produced much seed.   One of the smaller plants also grew up to produce seed and it produced a lesser amount of seed.  All of that seed though, ended up in the little 2' x 4' space in raised bed #3.   There were 3 weld plants which survived the winter.  I pulled out the weeds and shortly thereafter, all sorts of things started growing.  I didn't know what they were, so I left them.  Today I weeded the little patch again.   I think that most of those little plants are baby weld plants.   Once I am certain about it, I'll thin them out  so they are happier.

The Woad and the Japanese Indigo are happy.  The Indigo is thriving in the plastic cloches.   The Woad is taking it's sweet time to grow.  Considering the plants were so small, really too small to transplant, when I stuck them in the ground under the green cloches, it's actually doing quite well. 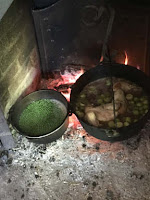 We had a hearth cooking class at Westfield.   We were in the Inn, which has 2 hearths.  The other side is larger and there was a boiled rice pudding and a soft gingerbread, which is cake there.  In the small hearth was fresh pease soup and cocky-leeky soup.  The pease soup was good and very spring-like.   We couldn't puree it properly, as we didn't have the right equipment.  The cocky-leeky soup was stupendously delicious though.   It's definitely a keeper recipe.  That's for another post though. 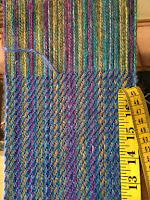 I found a skein of fuzzy blue acrylic in a thrift store which I used for the weft of the 2nd scarf.   I think it might be a short scarf though, as at 33 inches, I'm a bit over halfway through the skein.  I like how the blue is a bit more subdued than the black weft of the first scarf. 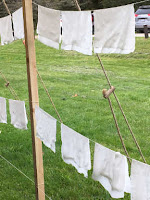 FOOL was a great event, although it kind of had a quiet end to the weekend, when huge winds blew through and threatened rain.  This caused virtually everyone to pack up and head home early.  It was a great weekend though.  We had a paper making tent set up where much cotton lint paper was made.  Here it is drying.   We did spend a bit of time racing around picking it up every time the wind picked up though.
Posted by Nina at Monday, May 27, 2019 No comments:

Spring Flowers and the start of gardening 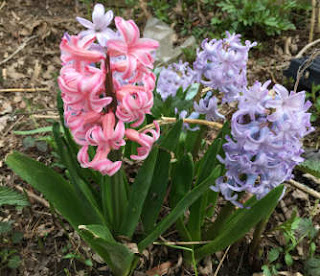 There is a green haze on the bush lots and many of the trees.   I was beginning to wonder if we'd have leaves by Mother's Day.   We usually do have them, but this year everything seems a bit slow.   We've been getting one reasonably nice day and then day after day of cool, grey, wet weather.  The spring bulbs came out en masse.  Usually it's a lovely progression with first the crocuses, then the Siberian Irises and the Scillia.   This spring they all bloomed at once.  Then the Hyacinths come, and then the daffodils with the tulips finally showing.   Again, these all bloomed at once.    Usually I get several days to sit outside with my tea and enjoy the heavily scented hyacinth blooms, but this year, I got a whiff in passing because it's not been warm enough and the stupidly strong breezes just keep happening. 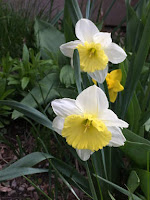 This year, thanks to our very active squirrels I'm guessing, there are daffodils in the ditch, by the neighbours field and hyacinths in our front flower beds.  Both of which are similar to what I've got in my gardens elsewhere.   I don't really mind that they've done that.  I was considering planting a few daffodils out on the edge of our property anyway and the hyacinths up front aren't a bad thing.  Although I do like to be able to drink my tea outside to their scent.  They are one of my favourite spring bulbs.

I've been playing outside the the garden.   The raised beds have been dry enough to weed a couple of times, so I've been pulling out quack grass and something else with long stringy roots but no growth yet at this time of year.    I need to add some compost and manure, but I found some cell packs of started lettuce plants, so picked up a few and planted them already.

Earlier this spring, near the end of March, I planted some woad seeds.  This seed is at least 10 years old.  It's germinated well in the past but this year I wasn't so lucky.   I had already over planted, with 3 or 4 seeds in a pot, but it was slow to start and then only a few came up.   I soaked some seed over night and planted that at about 5 per pot, in the same pots as the first ones.   I got enough to come up for use and there may be extras to give away.   The one woad plant that came up last year, is getting ready to flower, so I will have fresh seed.  Yay! 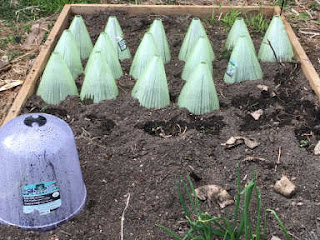 I'm going to be away for the long weekend, and really can't rely on my menfolk to water my seedlings, although they will do it if they remember.   I figured I could get them to water the garden, so I planted out the woad early.  It's cold hardy and I put it under little plastic cloches from the dollar store.   So far it's holding it's own.   It will be much easier to get the garden plants watered than the little tray of
pots inside the house.

There are now 24 green cones protecting the woad. The large clear cloches has Japanese Indigo.   There are more in a second bed.  This is a bit of a risk as the plant is much less tolerant of the cold.  However, I have enough to replant, as well as some extra for a friend, should the cold weather be too much for the Japanese Indigo.  However, if it survives the next week or two, the plant will have an advantage of a couple of extra weeks growing time, when my garden gets full sunlight.  Hopefully it will make a difference to both seed and indigo production.

I've been spinning and plying Merino - both white and natural grey.  I don't have photos yet.  I will say that the grey has an odd texture that almost feels a little dry, that I'm not sure about, but it's a lovely colour and quite soft.   The white is lovely as well, but it's also obviously more processed thatn the grey.

Rant -   Mainly, other administrative type things have been taking up my time, which has been a little frustrating.  It always gets a little bit frustrating and then poof, it's done and I get to spend a long weekend with friends, hoping all goes well and unwinding. It's never felt too much though until this year.  This year it's been compounded with not only organizing the classes for the event FOOL, but also with teaching a 3 week spinning class and prepping for a historical cooking class.  The cooking class is a non-issue since it's really just reading cookery books and doing an occasional cooking experiement ahead of time, figuring out a time line and documenting it.  I actually found it the most relaxing in the few days that I devoted to it.  The spinning class was where the pressure was, since the dates were sort of shoved at me.  If I'd really had a choice, I'd have waited until after the long weekend, when I had less on my plate.    But it is what it is and it's done.  Now to figure out where I found all the supplies and get them put away again.