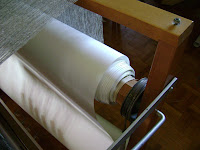 Here is what the back beam looked like when I started this project. Yesterday I went on a weaving binge. I wove and wove and wove.... I did have to start using bits and pieces. As well, I used some light grey icelandic wool, blended with black and darker grey shetland to mix in with the last bit. I've been weaving alternate threads. Luckily I did a pretty good job of colour matching so it doesn't look out of place.
I got a fair bit done and now am starting to see that light at the end of the tunnel. Who knew though, that one could get sore muscles from weaving. Throwing shuttles and treadling use a bunch of muscles I was only slightly acquainted with before!This is what the back beam looks like now. Woo Hoo, I know I'm getting close to the end. 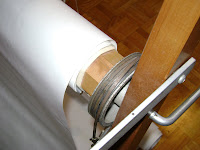 Will I miss this mega project? I don't think so. I like the planning of the projects, which includes researching it. I like the playing with the material, be that spinning the fibre or warping the loom with purchased threads. I like all aspects of dressing the the loom and possibly the only part of weaving that I like a little less, is the last metre or two of a project on the loom, when I get a little impatient to see it off the loom. Then I can play with it some more by finishing the fabric or starting a new project. Please notice that I've said nothing about fringing. I'm not fond of fringing by hand as it wears your poor finger tips to nubs.
Posted by Nina at Thursday, September 27, 2007 No comments:

I'm still weaving. Turns out it is a huge amount of weaving. Somehow I thought it would go a little faster than it is. I think it is like watching your pot boil. Whenever I check my back beam to see how much is still there, it looks like I've done nothing! I am however, almost out of spun yarn, so I must be accomplishing something. I had hoped to have it off the loom today. I'm thinking more realistically another week or two, if I'm lucky. It seems to be alot of weaving. I still love the colour though. I've caught myself petting it time and again.
Posted by Nina at Tuesday, September 25, 2007 No comments:

I redid my calculations for the warp below. They are correct! That means should have spun enough yarn, plus a bit of extra for safety. So what went wrong? The only thing I can think of is that because it was in two bags, one has gotten misplaced. I put the spun skeins in the perfectly sized green kitchen bags that we also must use for compostables for our trash pickup. So is there a chance that it got sent to our composting facility? Scary thought.. but possible. I will however, search high and low in case it got stuck in a wool storage container.. not like there aren't a few around here and am picking up a drum carder tonight to blend and start spinning more, just incase!
Posted by Nina at Wednesday, September 19, 2007 1 comment:

The long and scary warp ... 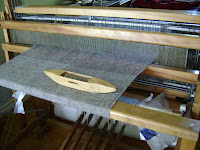 These handspun singles were a pain in the patootie to warp the loom with. The were hairy, scarily fragile and very, very long. It took 3 days to wind off the threads and get them to the loom. Then it took me another couple of days to thread the reed and heddles. To cap it off, I was only able to wind the threads on at a rate of less than 2 yards per hour, so it took me something silly like 8 hours just to wind the warp and get it ready to weave. Six threads broke while winding and at this point, I was really worried that the project was in huge trouble of not succeeding as the first few inches of weaving was pretty scary. Threads caught and the shed wouldn't open. Then poof.. all of a sudden I got all the tension right and so far so good, ( touch wood) it is weaving as it should.
The real problem? I underestimated my yarn requirements. I would have had enough had I alternated the light grey and dark grey threads, but my calculations suggested that I'd have enough of the light grey alone and wouldn't need to mix them. So I went with the light grey. Then I realized I was going through it at twice the rate I thought I would. Turns out I had underestimated the picks per inch and instead of having an unbalanced weave, I have a lovely balanced tabby. 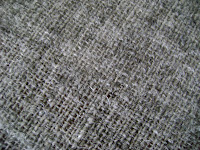 The colour reminds me of the grey flannel pants that the boys had to wear as part of their school uniform. It is so pretty that I am glad I didn't dye it. So, if I can borrow a drum carder, I will be able to mix some grey fleece to hopefully match, and be spinning and weaving my little heart out for the next couple of weeks. If not, well it will end up being two toned as I have far too little light grey to finish the project as is. Happy about the way the project is turning out but unhappy about the wool quantity discrepancy.
Posted by Nina at Wednesday, September 19, 2007 No comments: 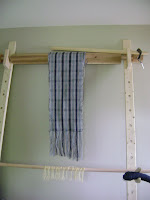 It's done! I cut the blue checky fabric off the loom this afternoon. Phew. I was in a bit of a rush as I'd ignored it all summer due to the lack of a brake which could be operated by myself alone and my husbands separated shoulder which prevented him from helping me. I was in a bit of a rush, as I'd been given 'til this weekend to get it finished and the loom out of the kitchen in order to facilitate the installation of a dishwasher.
I ended up adding extra sand to my weight bags which sped up the weaving by 2/3rds. However it was like lifting weights as now each time I moved the shed bar it was like slinging 20 lbs.
I ended up with about 4 yards of fabric. I've no idea what to do with it as it was just a sample to learn how to use the loom. It is awfully skinny fabric. Next time I'd do a wider project and not necessarily as long. It is in the washer right now getting a bit of a fulling and fingers are crossed that it is as nice after that as it was right off the loom.
Posted by Nina at Wednesday, September 12, 2007 No comments: 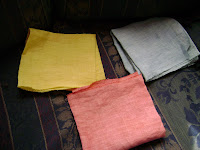 Linen is supposed to be difficult to dye and then it is supposed to only take very pale colours. I've also read that you need to do an alum/tanin/alum mordant procedure to get the pale colours to stay on linen. I present to you the results of the madder, woad and weld dye vats on linen. The linen was mordanted with alum. We were pretty overwhelmed with the fantastic and totally unexpected results. I haven't redone this experiment to see if it was a fluke or the real deal. It does however give some credence to recreating the findings of early period blue and red dyed linens. I was thrilled to bits with this particular experiment. 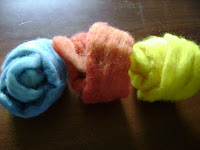 This past weekend I went to an amazing SCA event called Fruits of our Labours. There a friend and I taught a class on natural dyeing. We used woad that I'd grown in the garden, weld and madder. We had put wool and linen samples in the dye vats. The dyeing gods shined upon us and we had spectacular results. It was so much fun... the class as well as the whole event. The blue was gorgeous and interestingly it started off very turquoise, but a quick rinse took all the yellow out. The madder dyed this intense brick red/tangerine colour.. totally awesome and the weld, well it is this incredibly bright, deep lemon yellow. It was the best space to do a dye class in; outside, lots of space, fire pit, 15 feet from a water tap and best of all, Vincenzo practicing dulcimer 20 feet away, so we got serenaded while we played.
Posted by Nina at Tuesday, September 04, 2007 2 comments: