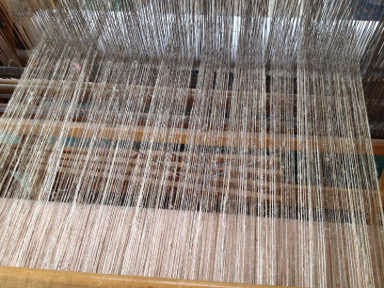 Master Spinner level 5 homework is in the mail, winging it's way to the instructor for marking.   It took all my energy and time for a couple of weeks in order to get it finished  before the deadline.   I had to retrain myself to sit and spin for long periods, practice stairs so I could get down to the warping board (it is permanently attached to the basement wall).  I hadn't woven anything since last year's level 4 final project and had to relearn all those leg movements.  It seemed to take forever! 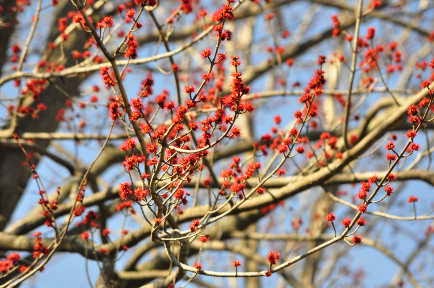 The weather has been on and off again.  One day it felt like spring and the next we had 2 inches of snow, which stayed for almost 2 days.  But all through the wind, rain and snow, the Maple trees still flowered.  The daffodils and tulips pushed up through the mucky ground and the crocuses bloomed for  their normal 2 minutes before the weather changed and the blossoms faded.  I planted some new crocus bulbs last fall, but they didn't come up.  I will try again this fall. 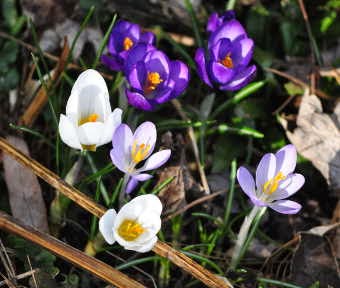 The little blue flowers which decorate the flower beds started blooming.  There are 2 or 3 different varieties but they are an awesome blue, which I have rarely seen in flowers.  They bloom early and quite profusely.  By ignoring them, they are starting to spread, popping up with dots of colour on the lawn.  Hubby isn't so thrilled, but I am! 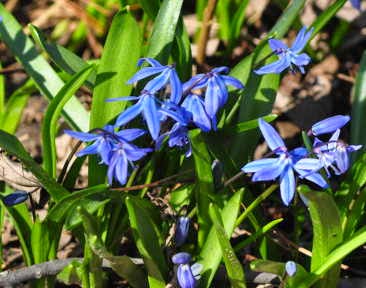 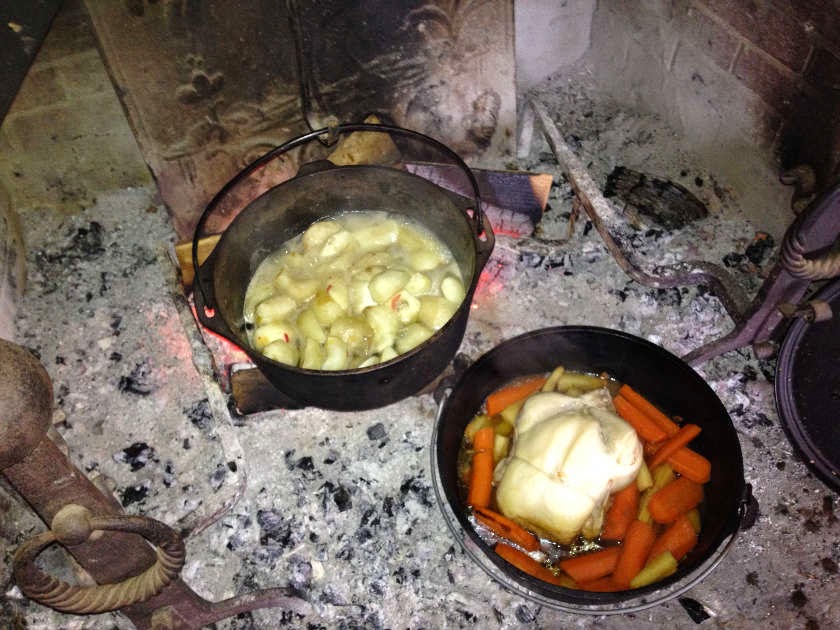 I was at Westfield on Sunday, in the Inn.   I brought my dutch oven, some carrots, parsnips, onions and a chicken. They roasted nicely in the hearth.  I was going to do the recipe Chicken a la Turque from the Cook's Own Book (1832) but forgot to bring the rice for stuffing and someone ate the bacon, which was to be wrapped around the bird before roasting.   It was plain old roast chicken instead.   The other pot holds Apple Compote from the above cookbook.  The recipe calls for 6 apples and 1/2 lb of sugar, some lemon juice and peel.   The apples became quite clear but held their shape.  The texture was a bit odd and the taste was not quite what I was expecting.  The lemon did cut the sweetness a bit but it was still a bit cloying and very syrupy.  Mainly though, there was an odd after taste.   Since I still have most of them left, and my boys would have gobbled them down if they tasted good, I won't be making this particular recipe again. 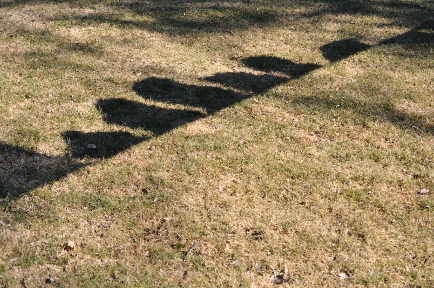 On April 1st, it was nice enough outside that I was able to hand the laundry out for the first time this year!  A bit of an April Fool's joke by Mother Nature though as it snowed on April 5th and left us a couple of inches of the white stuff, which is still melting off today.

I do love hanging out the laundry though.  It smells so fresh when you bring it in.   I don't even mind that linens get a bit crunchy and stiff sometimes. 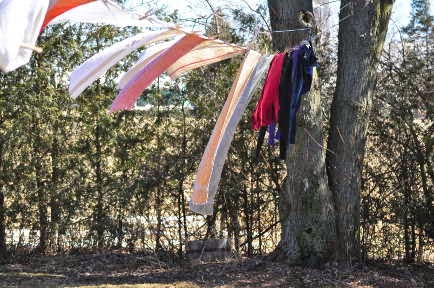 The grass is starting to green up.  The ground is still soft and mucky though, so there is much yard work yet to be done.  I did get the currants pruned, which is a good thing.  I should prune the raspberries as well.   I left the ancient gooseberry bush alone.  I couldn't tell which branches were old growth and which were new.  Only one looked like it might be newer growth.  I'm trying to decide whether it should be dug up and replaced, or if I should try to rejuvinate it.  It really doesn't produce well any more.  The fruit is also really sour, even for a gooseberry. 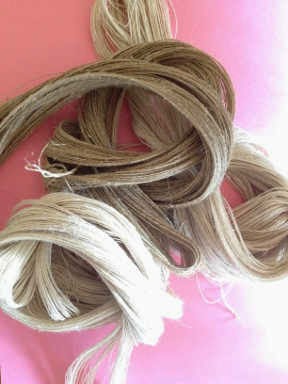 Other than that, I've been pushing through my Master Spinner level 5 homework.   I think I have all the book work done and am ploughing through the 50 hour project.  This year we are required to use cellulose fibre.  I really should have used cotton as I think I could have done with that much cotton practice but the thought of making that many punis was a bit daunting.  Instead, I started spinning hemp.  I knew I didn't have enough fibre on hand and was pretty sure that I could get more.   Unfortunately, I didn't actually check before I started spinning.   As I was finishing up the 100 g bag of hemp fibre, I went to order more and there was none available.   Egads!

Luckily, I guess, I had some flax fibre left from last year.   As this is hopefully going to be a woven project, I am hoping I have enough hemp for the weft and can use the linen thread as the warp.   I really hope that Keven is over his linen thread chewing stage, since he ruined my last linen project, by chewing on the warp threads. 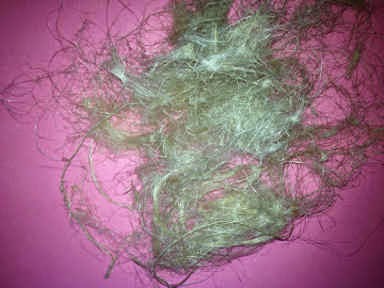 I'm not horribly happy with the flax.   It isn't a strick, but rather a processed flax top or sliver.  It is supposed to be longer fibres , but not as long a a strick.  Instead, what I am finding is that it is a mix of long and short fibres, mixed with lots and lots of tow cruddy bits, tangles and neps.   Some of the fibres spin smoothly until you get to the shorter bits.  Then it is stop and start, picking out the garbage.   Sometimes I get lazy and just try to spin some of the smaller bits in.   Once in a while it gets a bit slubby and I have to start picking it out again.
Posted by Nina at Monday, April 06, 2015 No comments: