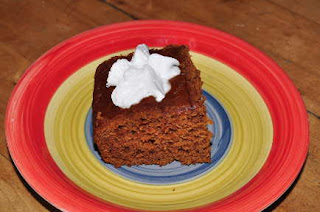 It's not cookies, but it is a gluten free gingerbread cake.  It is moist, tender and tasty.  It isn't dense and it doesn't have that bit of a gritty texture that some gluten free baked goods seem to have.  It is also easy to make.    It certainly filled my holiday gingerbread requirements.

Mix dry ingredients together, making sure the xantham gum and spices are completely blended in.   In a second bowl, mix the apple sauce, oil, molasses and water.   When completely mixed, add the buttermilk and egg.   Slowly add the wet ingredients to the dry, mixing well until any large lumps are mixed in.   Pour into a greased 9" x 9" pan and bake at 350° F about 35 minutes or until the top springs back when touched.     Let cool and devour!
It is just as tasty and still as moist on day two.

If you don't need it to be gluten free, just use 2 cups all purpose flour instead of the gluten free flour. 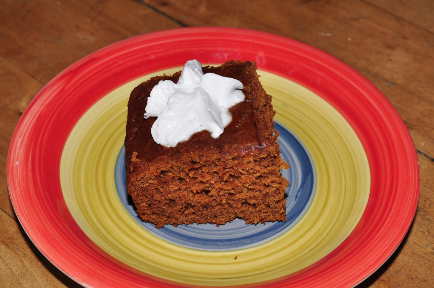 Twas the week before Christmas and all through the house 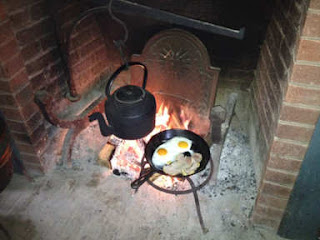 The last time I was at Westfield was for the afternoon Christmas Program.   After loading the wood box, sweeping and getting water, I filled up the cast iron kettle and put my lunch on to cook.  I always end up eating lunch there or do without because of the timing of my drive.  That day I had freshly laid eggs and back bacon.  It was a very yummy treat.  The kettle takes a while to get warm, but we had hot water for dishes and cooking in fairly short order.   Otherwise, I made english muffins on the gridiron and soda bread in a dutch oven. 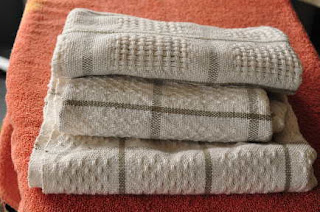 The tea towels are off the loom.  The huck lace worked out really well and I cut the towels off the loom, leaving enough waste to tie on another warp.  The disappointing thing is that the 2/8 natural cotton I was given, turned out to not be cotton at all, but some blend, so there was no shrinkage in washing .   My tea towels are large enough to be utility hand towels or small bath towels!  Guess what I am hanging in the bathroom over Christmas? 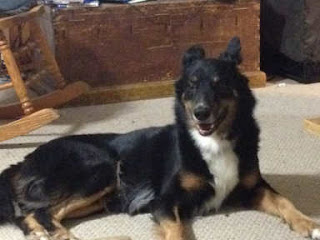 This is Harper.  He is a 10 year old German Shepard cross, with probably Border Collie or Aussie Sheepdog, because of his colouring, hair texture, tail and personality.   He is needing a new home because of a sad divorce situation where Dad took him and then dumped him on Mom, who can't afford to keep him.   He is a sweet mama's dog.   Unfortunately Kevin doesn't like him and chases him around the house, hissing, spitting, growling and attacking him all out with teeth and claws.  Hubby doesn't like him because a) he doesn't want another dog and b) his first night anxiety caused a few issues.   However with me, he is sweet as anything.   I exchanged the 4 ft long heavy leash, with a weighted spring at the clip end that he came with, for a 6 ft. long lightweight leash and all his leash issues disappeared.   He is friendly, warm and when he is trying to get away from Kevin attacking, he does do the lap dog thing, where he climbs on me for safety.   He is a pretty large dog and definitely not a lap dog.   His house manners are pretty darned good though.  He doesn't beg for food, doesn't eat the cat food, which is on the floor and sits nicely at my feet when I am sewing or spinning.   As long as Demon Spawn Kevin isn't in the room, all is good.    Will he stay with us?  I don't know but he is slowly settling in for now after a bit of a traumatic start.
Posted by Nina at Wednesday, December 23, 2015 1 comment:

I dressed the loom with the cotton warp for tea towels, using  a huck lace pattern.   I chose a project from a magazine and modified it to fit my desired parameters.   Then I started weaving, or at least tried to.   One of the tie ups worked, for a true huck lace weave, but both the warp and the weft spot tie ups, just didn't work at all.  In the end, I resorted to several websites for information, Sharon Alderman's book Mastering Weave Structures and Ann Dixon's Handweavers Pattern Directory in hopes of figuring out what was wrong.  I got some ideas and I now know that I would use the more common huck threading next time instead of this one.    In the end, I started lifting shafts and changing combinations until I found ones that worked for the huck spots.   So totally not what the tie up is in the presented project.    I'd even looked up errata before I'd started, and there was none that I could find.

All's well that ends well, I suppose, though I spent a good few hours working out the wrinkles in this one.

The regular huck lace, which uses 2 shafts for an even balance is super easy but as I'm using a counter balance loom, one of the shots in the warp spot pattern is a little small, as it is a 1/3 lifting pattern.  I just have to be careful and slow down a bit because that is much faster in the end than unweaving to catch a skipped thread.

This colourful scarf is from a guild project.   It is made of cotton and has some sort of funky twill design, that you can only see in this photo and not really in real life.   I didn't choose the pattern, but I think it is wasted on the bright multi-coloured, random stripes, at least with the pink weft.  The pattern showed up nicely using a dark blue thread, but it changed the flavour of the project.   I was going to give this away as a present, but my hubby asked for it.  He then explained that he wanted to give it to me, knowing that I likely wouldn't keep it for myself otherwise.
Posted by Nina at Tuesday, December 15, 2015 2 comments: 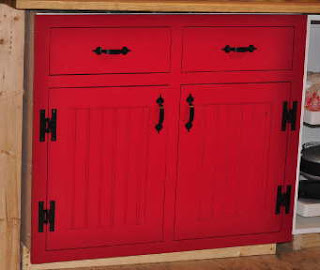 The bottom cupboards are almost finished!   The face frames, doors and drawer fronts are being finished up.  Because they won't be permanently installed until the spring, they are being placed in their respective spots for storage and use.   They look so awesome!  The colours are bright, cheery and they warm up the kitchen beautifully, which is a lovely change from the dirty, dated, dreary peach paint and wallpaper.   Because it was over 20 years old, without being cleaned or repainted, it was really awful. 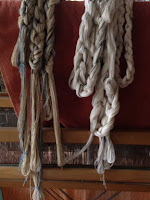 There has been a fair bit of playing with string.   The sweater now has a front, a back and half a sleeve!  Yay!
I've been winding warps for future projects as well.  The darker one is partially finished.  It will be yardage for a cloak or a sacque coat. 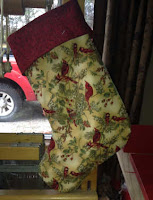 The lighter one is for a set of huck lace tea towels.   The tea towels will go on the loom in the next day or two.  Right now there is a large work table set up against the loom, to accommodate painting cupboards and attaching hardware.


Some utility sewing has been done.   I played with a pattern design and used an old sheet to work up a sample.   I'd hoped it would be wearable, but no such luck.   It was a good learning experience though, as I played around with a few new techniques but the sample is definitely not wearable.

The little Christmas stocking I made for my daughter's cat is pretty cute though.  Lucky kitty! 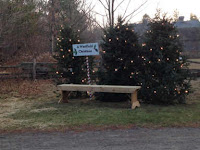 It is Christmas at Westfield.   The evening programs are pretty spectacular, with the whole village being lit with oil lamps and candles.   It is so pretty. 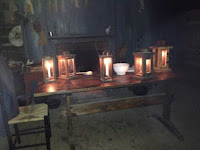 The Lockhart house is lit with candles.  It was fun explaining to kids that the house didn't have electricity so we couldn't turn on lights.   I made a venison stew which was pretty yummy and a dried mix herb blend, for flavouring soups and stews when fresh herbs were not available.   I underestimated exactly what volume the recipe would make.  It filled the white bowl to the brim.   I had brought 6 little bottles with me, and could have filled another 4 or 5!   But the herb blend turned out quite tasty.  I flavoured the stew with it and it was perfect. I will use it this winter instead of the herbes de province mixtures I usually use.  I think it would work not only for soups and stews, but for meat loaf and spaghetti sauce as well.