Linen's off and the Wool's on! 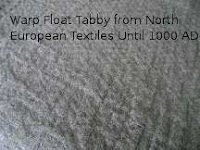 Phew, the linen singles are off the loom. The resulting two pieces of fabric are washed, dried and pressed, waiting to be turned into towels and samples. I will admit that I was happy to finish the project. Linen is seductive in it's possibilities, 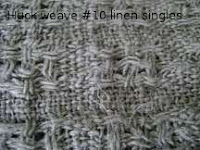 but I can't afford the quality threads that call to me - and the rougher #10 singles just didn't cut it in the end. Still, they are nice bits of cloth and it was a very good learning experience. It really isn't conduicive to that soft, warm cuddly feel when it's on the loom though - more like burlap.

On Saturday a friend and I went to Headwater Wool in Orangeville. Karen was looking for a unique yarn. Unfortunately terminology got in the way of a successful shopping trip for her as I hadn't realized how chunky a yarn she was looking for. However, I happ 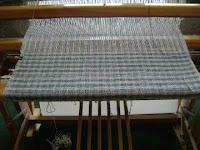 ily spent more money than I'd anticipated and now have a lovely new stash of romney wool yarn to play with. Right now on the loom is a simple tabby weave but I'm playing with colour. This one is definately a tad fussy to weave, with colour changes every 4 rows, but it's pettable and yummy. It was fast to wind the warp, fast to dress the loom and if it's taking longer than I expected to weave, it's probably because I'm petting the wool far much. The colours are natural grey and two shades of blue. The blue, while chemically dyed, are woady looking colours. Hopefully this project will turn into shawls as there should be enough yarn to weave two of them. If I planned it correctly, there will be enough yarn left from this trip to make another couple in a different pattern and colour as well. Shawls are a good way to ward off the winter chill!
Posted by Nina at Wednesday, January 28, 2009 No comments:

I got one towel and a bit woven with the #10 linen singles before I threw up my hands in frustration. Well a little bit frustrated anyway. The original textile sample with this weave structure was found in wool. The way the pattern was weaving meant as I wove more length, the tension of the threads with the floats kept getting looser and looser. Because there was little take up (the amount of thread used up by bending over and under each shot of weft), it was getting harder and harder to weave. I figure out that this was the problem when I ended the first towel and did a bit of tabby weave in the hem area, so it would be smoother and easier to hem! After a few inches into the 2nd towel, when it was becoming apparent that I wasn't actually spending any time weaving as it was getting less enjoyable with each shot of the shuttle I decided to make a change.

I was going to cut o 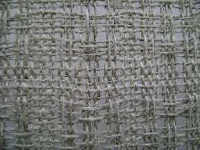 ff the first towels and rethread the whole kit and kaboodle with a new pattern. Before I could change my mind, I grabbed the scissors and off it came. The linen is now - finally 'cause it took a while - threaded in a similar huck pattern with tabby bordering each set of huck patterns. This seems to allow the tension to get back to normal before I start the next pattern picks. Of course I won't know for certain until it is off the loom and wet finished but since the whole thing is now an experiment, I'll get what I get. At least I'm back enjoying the process. Next project will be wool though. I think for now my appetite to play with line 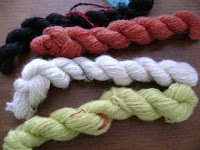 I finished up the small naturally dyed skeins that I'm bartering for a riveted steel pot. I'm planning on using the pot to dye wool in on open fires. I thought it would be a good demo tool as well as another aspect of dyeing to play around with.

Then I got a call that the fleeces I'd sent to Wellington Fibres were done. The 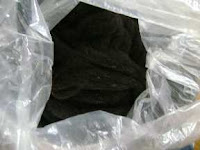 y do an amazing job of processing fleeces although because of that it does take a while to get them back. These were dropped off at the end of June '08. The fibre is nice but full of chaff or vm (vegetable matter). They were lambs fleeces from Earendel Farm's Grainney and Foote - well half of Foote and all of Grainney or was it the other way around? They came back really nice though still pretty heavy with vm. At least it is fairly easy to pick out once I actually put my glasses on and can see it. This one partial bobbin has taken me more hours to spin that I'd expected. It's pretty thin though and right now the aim is a new weaving project sometime in the future, whenever I get it all spun up. 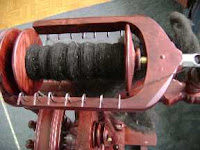 So cool - geeky, but cool

Yesterday, after my few moments of self-indulgence, I had a couple hours before we needed to leave the house and I couldn't make a mess. So, I went to the loom room and finished warping up the #10 linen thread which I'd been puttering away at. I'd worked out the pattern for the float patterned tabby diagram in Lise Bender Jorgensen's book - Northern European Textiles Until 1000 AD., and I was using it for this linen project. I chose the pattern because I wondered what it would really look like in fabric. It has a fairly complicated threading pattern, but an equally easy treadling pattern. The warp is a short one, only 4 yards long to make 3 towels. The #10 linen is singles and a tad hairy, but the price is very good for linen. The handspun linen I'd done earlier this fall is spun about the same as the #10 linen, so I was able to use up a half bobbin leftover for sampling.

According to my calculations, a sett of 24-25 would be suitable for a tabby and since several other projects documented on the web and at least one on-line sett chart said twill would be 30, I figured at 24 epi, I'd be fine. I started weaving and after remembering to spritz both the warp and the bob 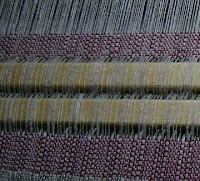 bins of weft with water, the structure started looking much better than I thought it would. I was worried that the floats within the tabby stripes would either show as overly textured or as distinct stripes. I'm actually quite fond of the sample.

I wove off the sample piece - meaning wove it so I could cut it off the loom in order to wet finish it to see if my sett was suitable. This is done by weaving in two lease sticks with an inch of tight tabby weave before and after. You can the 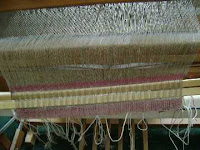 n cut the sample off at the beginning of the first tabby band. You fold the lease sticks together and tie them on to the front apron rod. If you do this securely enough, you can finish up your weaving, with no change to your tension. It is a totally cool trick.

In the second photo, you can see the sample has been cut and the sticks, tabby woven to the remaining warp are just hanging there. 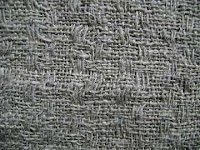 I washed up the sample, tossed it in the dryer and then ironed it damp. This is what it looks like. I was worried I'd need to re-slay the reed for a tighter sett, but this is pretty nice. Not quite as tight as it could be, but it works. It is an interesting pattern and the floats are floaty and a bit twisty. There aren't any crossed threads but if I let the threads dry out while weaving, this is what seems to happen - so I'm weaving with my spritzer bottle by my side!

Yep - cool, awesome and totally intriguing project. I fear I will miss it when it's off the loom.
Posted by Nina at Wednesday, January 07, 2009 No comments:

We have one dog and one cat. Today, in preparation for another bunch of people tramping through our house to view it, I once again vacuumed. Now I have found that as soon as I vacuum, pet hair appears mysteriously in certain places almost before I get the hose put away. Over the past couple of months, I have developed a plan which so far has been fool proof. I trick the pet hair by vacuuming certain places, like the living room carpet before I do the rest of the house and then when the hair has finished spontaneously rising once again, I vacuum it a second time on route to putting away the hose. It has worked a charm... Until today that is when of course I was congratulating myself on the fact that pet hair, being inanimate, wasn't very smart.

More people are coming through the house tonight. Which means not only do I not get the garlicky roast my husband promised to make for dinner 'cause he's on holiday and wants to cook tonight, but that I had to do all the extra cleaning today. I dragged out the vacuum and did the living room carpet before getting the rest of the house vacuumed. On my way through to the hall way, I did indeed redo the carpet getting what I thought was the last of the hair which hides insidiously amidst the carpet fibres. When I went back to unplug the hose - yay for central vacs - What did I see? Tufts of pet hair growing from the fertile fibres of my area rug. I mean I almost never swear and this was one of those moments when I almost did!

After three passes of the stupid vacuum, I got to wash the floors. What did I see in the bathroom, but a tuft of dog hair floating about merrily as if to taunt me. Taunting dog hair - that is close to my limit! However, I never, ever will underestimate the intelligence of inatimate objects, nor will I cast judgment upon them. Neither will I ever presume that a method to foil such objects will work all the time. I keep my fingers and toes crossed that someone will soon buy my house and I can be relieved of this misery. That or that the loom faery will stick a 45 inch wide, 8 shaft loom under my pillow so at least I can lock myself in my studio where I can pretend that I'm not creating a mess and self-medicating in new fibres and weave structures in a way that nobody gets hurt - only my fibre budget and those who end up with my woven experiments. ( At least those items are soft and dont' hurt at all)
Posted by Nina at Tuesday, January 06, 2009 2 comments: