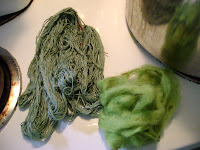 A friend and I are teaching a class on natural dyeing this weekend. We will be doing Madder, Weld and Woad dye vats. The woad is supposed to come from my garden, however the weather this year has not been conducive to lots of growth. The lack of rain really affected the woad and much of it really was only at 4-8 tiny leaves for most of the summer, despite my trying to keep it watered. We've had rain lately though and it has finally started growing. This means I had enough to do a trial vat today. I'd had nightmares of doing the class dye vat and finding my woad leaves were lacking any or at least enough pigment to form indigotin.
I am not worried now. I got a fairly nice medium dark blue/grey on some off white silk, and the yellows I stuck in.. Lady's bedstraw or yellow bedstraw and Dyer's Greenweed, turned nice greens. I can relax as the woad is harbouring pigment afterall.
Posted by Nina at Tuesday, August 28, 2007 No comments:

We got back from holidays last Saturday. We'd been camping at Pennsic for almost two weeks. A week and a half before we left, hubby managed to fall while fencing and separated his shoulder. Friday at physio, he was told he could doff the sling and slowly start using his arm normally. He's incredibly happy about this as the sling was getting awfully frustrating.
I've done about 40 loads of laundry as the weather in PA was either incredibly hot and humid or warm and wet, making for damp gear, clothes etc. The kids too remarkable care of the beasties while we were gone. They're all adults so they should but I think I'll always have a bit of the Mom worries. Unfortunately the computer decided to have a hissy fit just before our return. Thus I update today's blog on my brand new computer, with a 250 gig hard drive with 2 gig of ram and a LCD monitor which is large enough for me to see without glasses if I so choose! Hey, I can remember when our first computer used a tape recorder for a drive and the first floppys that were conveniently available cost almost $300! And typing in games programs.. ohh..that's a few years ago.
Tomatoes and peppers abound in the garden, although I did have to water as it's been so dry here that the pepper plants were wilting and the tomatoes turning yellow.
Posted by Nina at Saturday, August 18, 2007 No comments: