Guardian Cat to the Rescue

Yet.......... if I am not feeling well, and not a I have a cold unwell, but really unwell, he is right there checking up on me.    When I got home from the hospital, we couldn't keep Cat away.  He normally asks me to feed him as soon as I'm up, but he didn't once mew pitifully as if he would waste away without his morning tablespoon of wet, gushy food.    Instead, he spent his days and afternoons cuddling up to me.  Either right beside my incision or trying to get on top of it.  As long as he could be touching my right leg in some rather overt fashion, he would make himself at home and cuddle up.

Yesterday he was still finding ways to perch on top of my leg.    This morning however, he decided that perhaps it was time for me to begin feeding him again, although it will be a little bit longer before I can actually access the kitchen for his food and manipulate the tins to his dish.   He has also decided to take his morning nap someplace other than on my leg.

That can only be good news. It can only speak of good things for the awesomeness of kitty healing powers.

On Floors and Cats

The kitchen floor is wonky.  In a previous life, the kitchen had basement stairs in the far corner.  When the entrance to the basement was moved, they just went over the opening, without adding support.  To top that, the original floor was built on a slope to begin with.  When we first moved in, hubby put new beams in the kitchen because they are over a hundred years old and probably needed it anyway.   It helped a little, but the time has come to actually fix the floor.  I will need the stability of an even floor for the next couple of months.  I can avoid the other uneven floors, but not the kitchen. 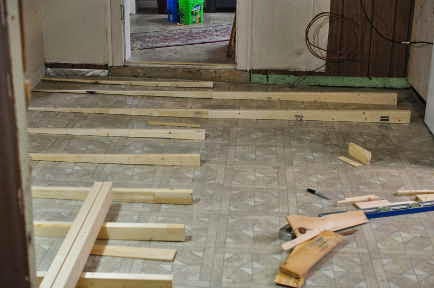 It turns out that there are only 3 layers of flooring and a subfloor put down over one of the linoleum layers.   However, nobody actually bothered to repair the slope in any of those times and one included putting in a set of cupboards, such as they are.   That would have been the perfect time to level the floor. 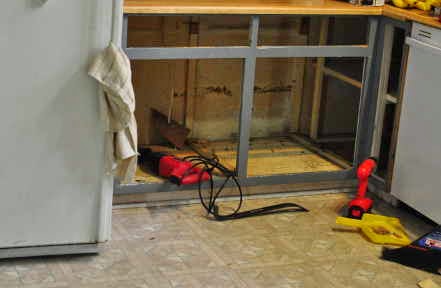 It started with ripping off the trim and finding out that the original lathe and plaster has simply been covered with old paneling and then wallpaper over that.   I would love to replace the walls but it is so not the time for that right now.   Hubby had hoped that the flooring hadn't been glued down, so it could be reused for now because it is in reasonably good shape.   However, it was well glued down so the floor is just going over it.   The first efforts had full 2x4's used to level things, but it was too uneven, so 4 foot lengths were used instead.   It's been slow and painstaking to get it even, but slowly it is happening. 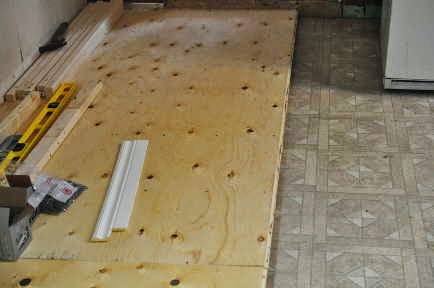 The plan had been to bring it up the the cupboards and just lose the few inches of height, which for me would be fine.  However, it turns out the slope is such that it won't work, so all the cupboards will be coming out, to be temporarily replaced with shelving until we find bottom cupboards.  It's not going to be a huge loss, because they were so badly designed that almost half the bottom cupboard space is actually inacessible.  Good planning there!

Will it be done before I get home from the hip replacement?  I doubt it, however I have hopes that it will be finished or at least even when I start getting my mobility back. 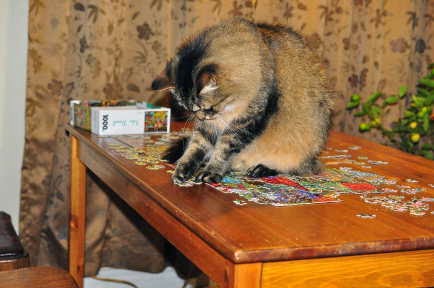 It turns out that Kevin isn't the only cat to get into trouble.  My kitty, Cat is so well behaved it's silly.  He never gets into trouble, is polite yet full of personality.  He is getting on in age, but once in a while he is still playful.   After batting puzzle pieces around for a bit he did what he has always loved to do when a project is left in the open.   He got comfortable for his evening nap. 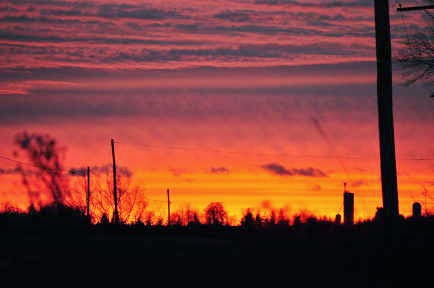 One night just before Christmas, the sky looked like it was on fire.  It was a totally awesome sunset!  I was glad I looked up when I did as I had time to grab my camera and get outside for a few shots.  I couldn't go far because I didn't have my coat, my mittens or time.   It had faded after a couple of minutes, but was glorious while it lasted. 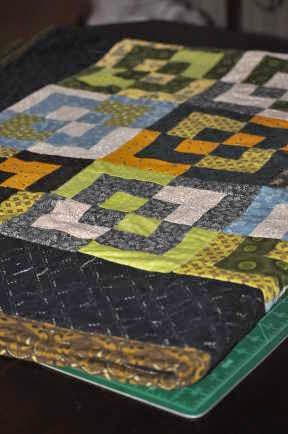 I finished one quilt but not the second one.  I just did straight stitching along the blocks, but I did a large stipple on the black border.  The backing is a green print that isn't related to the blocks in any way other than some of the greens are similar.   It was well received.   I wrapped up the second quilt top and gave it anyway.  It is sitting on my sewing machine, waiting for me to finish it up.  I have all the supplies except thread. 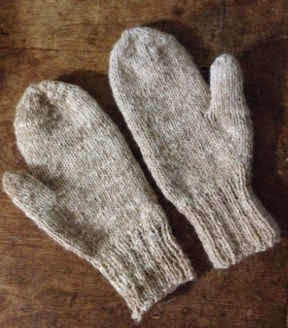 I finally found the rest of the alpaca/superwash merino yarn.  I knit the second mitten and finished it the evening of Dec. 31st.   They are soft, pretty and very warm.   I was glad to have gotten that project finished before the new year.
Posted by Nina at Friday, January 02, 2015 2 comments: