Madder, linen and cats, Oh My! 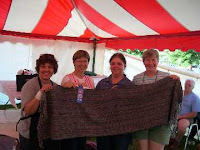 Last Sunday I was part of a Guelph Handweavers and Spinners Guild sheep to shawl team at the Drumbo Fall Fair. The guild fielded two teams. GHS team A came first while we came in 2nd, by only 1/2 point. The first place team scored 88.5 and we scored 88. We were pretty happy. The team is an amazing group of gals and it's so much fun to work with them. It was a great day and a really nice break.

Between scrubbing and packing extra s 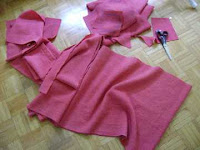 tuff away, I actually got some more fun time in. I cut the madder dyed tabby woven fabric up. That was a pain as I didn't have quite enough for the pattern I'd wanted to use and had to set the pieces of a regular T-tunic several times before I could fit them on the fabric. I could have done an apron dress with ample fabric to spare, but it's too late now. It cut beautifully and I had almost nothing left over. I did save some of one selvedge edge as it is so nice and straight.
It's h 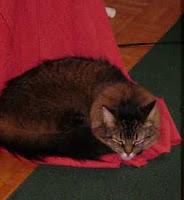 alf sewn together already, however the cat has decided that he likes the madder dyed wool. I've put other wool pieces down for him, commercial wools, but he's having nothing to do with them, my cat of descerning tastes.
In between times, as the fairy tale goes, I've been spinning straw into gold or spinning flax. I've tried both line or flax strick and tow flax or flax top. Both required more spin than I'd expected. I wet spun them - don't use too much water, just dampen your fingers or you glue a whole fat bit together, which you don't want. Interestingly enough, I wasn't able to fill a bobbin as the flax doesn't spread out to fill gaps in the bobbin as wool does. It just piled on top of each thread, so I wound off at half a bobbin full. I got about 250yds - 360 yds per half bobbin, so that is pretty good. 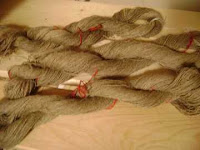 I have enough spun to use for the weft of a good sized tea towel. I'm out of flax fibre though and I want to spin more ... bwa ha ha ha ha... It's quite satisfying to spin flax that I can actually use for weaving more than a sample bit. The skeins are quite fine, pretty even and not many more little ends sticking out than the commercial linen singles I have. By the third bobbin, it was actually really nice.
Posted by Nina at Friday, September 26, 2008 No comments: 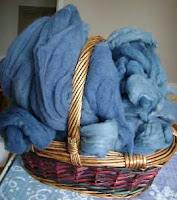 The final vat of Dyer's Knotweed is finished. What fun that was and talk about a learning experience. Did you know you can leave the vat overnight and reactivate it in the morning? I figured that one out on the 2nd vat this past week. If I'd tried that for the first vat, I'd have had much more fibre dyed. As it was, I was hunting down all sorts of end bits of fibre to dye blue as all my fibre is packed away. So the total dyed with my 12 surviving Dyer's Knotweed plants - including one vat which definately didn't work was over 1130 grams - over a kilo of wool dyed. The breakdown was 762 grams of merino roving - then I ran out and had to change to yarn. The yarn was 310 grams of wool skeins fro 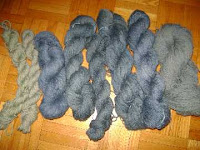 m various breeds, mainly shetland -white and fawn with some Finnsheep and Bluefaced Leicester, plus another 60 grams of alpaca. You can see on the pictures of the skeins that the alpaca and the one on the right are from the final dye bath, which was definatley exhausting at that time. I tried and tried but couldn't get them any darker.

In between all this I was packing up the clutter in the house because hubby has been offered a job with a contractual requirement to move closer, quickly. This means our house will soon be up for sale. 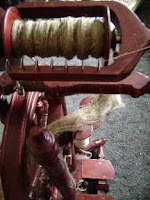 next two projects on the loom have to wait until I get the loom moved upstairs to my studio - apparently buyer's can't understand a loom being in the diningroom, I've been spinning. I was trying to finish off spinning the urine vat samples, when a couple of small ziplocks of flax fibres dropped into my lap. I realized that one of the next guild meetings was to discuss samples we'd spun from last year's meeting topics. Well, the artifical and new fibres I hated - and hid so I'd never have to look at them. The lace spinning was awesome and I had samples spun within a week of the meeting. The flax meeting I'd missed due to illness and was handed the samples at a later date. I didn't do what they wanted! I looked at my little ziplock bags which were obviously fibres to be blended - flax/soy - flax and something else. I dumped the blends - not for me at this time and just spun the flax straight. After I did the flax tow, I did the strick or line flax. Then I dug through and found some more line flax. Then I realized that I had another packet of line flax I'd set aside during packing and that hubby had packed my really nice, high quality pale flax and my distaff! So I'm using the towel technique, which works amazingly well and I've half a bobbin of linen singles spun. It's callous forming and I know I should stop and get my blue samples finished but I'll blame it on the cat. He only drinks out of the dripping tap and I've found out that he will also drink out of the fingerbowl I'm using to dampen the spun flax before I wind it on. I can't have a thirsty kitty now, can I?
Posted by Nina at Saturday, September 20, 2008 2 comments: 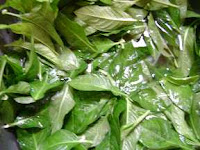 I've realized that we're getting close to the end of our growing season. We could have a real frost anytime soon. So, not wanting to waste what I've grown and needing a diversion I've been harvesting the rest of the Dyer's Knotweed - polygonum tinctorium. I'm quite put out that the last bit of seed seems to have been misplaced in the clearing out of my studio as this stuff is now producing lots of pigment! Beautiful blues and lots of it. 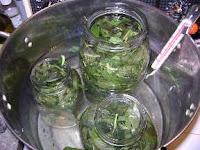 It's a slightly different technique than processing woad, only in that you need to cook the leaves slowly to 160F before you can strain the leaves and oxidize the dye liquor. It is supposed to foam up like woad, but mine hasn't at all. This is the 3rd batch I've done this week and hopefully I'll have enough blue fibre to actually do something with, not just sample skeins. 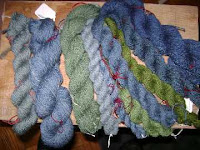 I've only a few more indigotin urine fermentation vat samples to spin - wonderful colours and well worth the odours :) Spinning samples seems so fast and productive as you get the skein done in one evening! I've even remembered to label all the skeins - bonus!
Posted by Nina at Tuesday, September 16, 2008 1 comment: 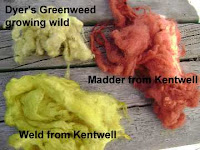 The UK dye samples are done. The Madder root and Weld were from Kentwell and the Dyer's Greenweed was harvested from the wild. Funny thing is that the colours are pretty much exactly what I have gotten with Canadian grown plants. Yay - huge amount of excitment as the colour correlations spanning across continents is very good news to someone who is interested in European archaeological textiles and reconstruction or experimental archaeology.

I'm in the middle of trying to use up my Dyer's Knotweed. I did a first experiment in August and had a rather pretty but pale ice blue colour. Because we could have frost anytime now, I just started picking leaves. I had about 600 grams of them. I followed Rita Buchanan's recipe from A Dyer's Garden and so far I seem to be having great results. 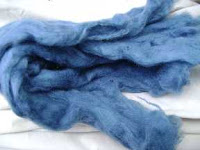 It is a bit different than working with woad. Woad foams up wildly and the blue pigment dances on the top of the foam. My two experiments with Dyer's Knotweed show nearly no foam whatsoever. I ended up using my stick blender to add air and only realized I was oxidizing pigment when the darned thing turned blue! No, I don't think it will come out but it is only used to make soap. The recipe said that 8 ounces of leaves would dye 2-4 ounces of wool. I put in 58 grams of wool and it dyed it a lovely blue - I then added more wool and it dyed it the same lovely blue. I've added more and more fibre and it's still dyeing it. I'm using merino roving and I'm 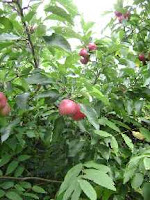 running low. I'm betting I have enough of this blue fibre to actually do something with though, instead of just spinning samples!

Look what I found in the garden today! Woo Hoo - the apples are ripe! I had almost forgotten about them in the rush of the past few weeks but they practically glowed beside the white Rose of Sharon. Aren't they beautiful though?
Posted by Nina at Wednesday, September 10, 2008 No comments: 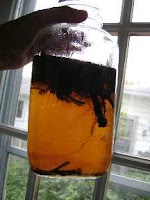 A friend went to England. I sent some mordanted wool with her as she had hoped to get a few dyeing experiments done. Instead, she brought me back the wool accompanied by some madder, weld and dyer's greenweed which was grown in Britain. They are all soaking right now to see what the difference might be. The madder was soaked in hot water for about an hour. The water turned this yellowy colour - which I drained off immediately after photographing. Yesterday it was a lovely deep cherry red but today it has started to ferment and is cloudy. I'll be dyeing with all three samples over the next few days. My dyer's greenweed is still flowering, so maybe I'll get a chance to do a sample with it as a comparison as well. 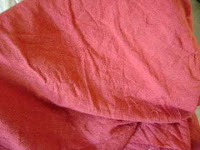 d wool is off the loom. It took hours upon hours of weaving to get it all woven. I have just over 8 yards of fabric, tabby weave, with really good selvedges if I do say so- one of those wow moments when I realized that they were really straight. The fabric is pretty and it's been wet finished - still needs ironing. The last yard or so I wove off with a handspun grey shetland single. I was just playing around so despite the sett not being what was recommended for a twill -too loose apparently- I wove off a new twill sample.
The fabric is so wonderful. It is soft, it drapes and yummy. I'll be off to buy some more of that wool next week, if there is any 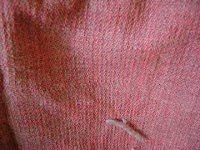 left as I want to make a series of shawls with it as the twill weave was so nice. I will do nice fancy twills in patterns which require a bit of concentration but are easy to see when you make a treadling error. This weave was almost impossible to see errors with. I will admit that the last couple of yards of tabby weave on the madder red made me decide that I won't be doing too much tabby weave for a while.

Now to figure out what to make with all that luscious red fabric? The twill sample isn't big enough for a shawl, so I may need to cut it up for something - not enough for a hood but would it make a nice hat perhaps?
Posted by Nina at Saturday, September 06, 2008 No comments: