One of the Master Spinner 5 homework assignments is to spin a warp yarn and a weft yarn, and then weave a 5 in sample, showing how they work.    For the warp, I spun a worsted yarn, though not a true worsted, using sliver and a short forward draw.    I wasn't sure what piece of equipment I'd use to weave with, so I spun 2 different wefts.  One was a slighter larger grist yarn using a point of contact long draw.  The other was pretty similar to the warp yarn, short forward draw from sliver.

I can't use my floor loom yet and besides, the amount of loom waste for a sample of this size would be  huge.  I'd have to use a dummy warp and until I have clearance to bend, twist and fold myself into the loom, that just isn't going to happen.   I did think of borrowing one of the guild table looms, but then the message came out from the President, that the table looms were dressed for the next scarf workshop.  My friend Maureen had offered to loan me her granddaughter's rigid heddle loom, but it has a project on it, albeit a stalled project and there was no way I was going to take a child's work off the loom for this.   I was going to borrow my girlfriend's table loom for a few months.  Arrangements had been made back in the autumn, but I forgot to remind her to bring it to an SCA event in November and she forgot to bring it.  That would have been the best solution. 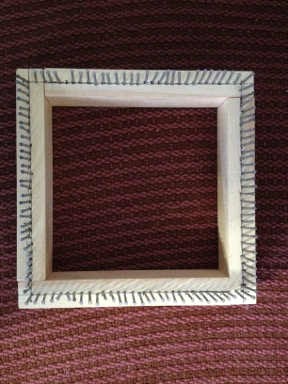 The last time I had to weave a small sample, I'd used a cardboard, makeshift pin loom, which really didn't make the grade.  It bent and I couldn't get a decent sett for the silk yarn I was supposed to use.  So, what to do?  I asked my sweetie to make me a wooden pin loom.  It didn't have to stand the test of time, just survive through one project.  I figured some scrap wood and finishing nails.

This is what he made me.  It is assembled with 2 wood screws at each corner and nicely squared.   The frame will not fall apart.   I lost one of the finishing nails when I was trying to figure out how to remove the woven piece from it.   It was easy once I realized I needed to use my little bodkin needle to flip each yarn loop over the nail head. Someplace hidden in the folds of a pile of fibre, is a lone finishing nail, either happy to have escaped, or mourning,  missing his spot in the upper left corner of the loom. 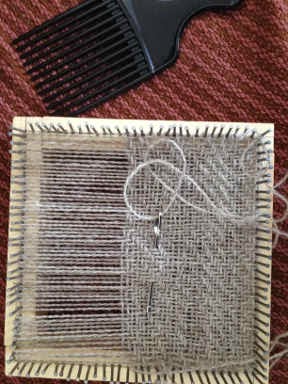 Because I had requested the nails be set at 5 per inch, which gave me a sett of 10, each nail holding 2 theads, I used the weft yarn which was similar or pretty much the same as the warp.  It is my preferred weaving materials anyway.    I decided to do a straight twill instead of a tabby weave.  That was interesting.  I highly recommend manual weaving like this to truly understand a weave structure.   It is one thing to set the loom up according to a diagram and another to have to pick each row up with a needle. 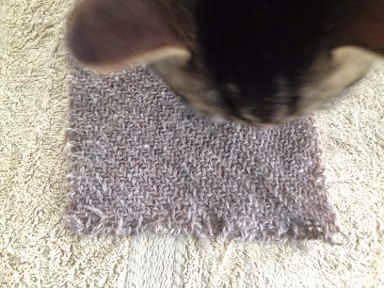 What I notice the most was how long it took.  It thought easy, peasy, it would be done in no time.  It took a couple of minutes to wind the warp on the loom and 4 hours or so to weave it off.    I only had to unweave a couple of rows and I caught them right away, so that was good.  The bad part was that it was a Ground Hog Day mistake.  Like the movie, I made the mistake 3 or 5 times in a row, after picking out the error each time, before I realized that it was time to take a break.

A couple of hours later I was back weaving. The last few rows were easier than I'd thought.   I knew not to let the warp get too tight while winding it on, so I had enough play in the threads at the end.  I'd used a bodkin, for threading cords, rather than a sharp needle.  This turned out to work really well, as I didn't ever catch the warp on the needle.  When it was off the loom, I wet finished it with a bit of agitation in some warm soapy water.  After rinsing, I was going to give it a hard press, but not only can I not bend enough to  access the outlet to plug in the iron, but Kevin kept trying to sleep on the wet sample.  I decided to let it dry au natural, up high, where Kevin can't reach it. 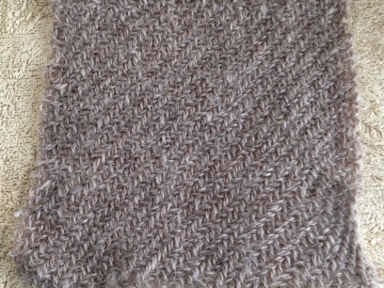 I really dislike the selvedges.  They are a little loopy and look sloppy.  I don't know if it is my technique or just a result of the pin loom itself.    However the weaving is fine.  I caught all my mistakes and it is nice enough for my homework sample.   It would have been better if it were hard pressed, but maybe I'll remember it before my homework is ready to ship and can re-finish it then, if I really think it needs it.

I can't imagine doing a large project with this method of weaving though.

Holy Cow! I cannot believe it's been almost a month.  It's been a month of mainly healing time, with a bit of activity, mainly physiotherapy.  In the last week though, especially the past couple of days, the mobility has been growing noticeably.   I find out next week if I can start slowly transitioning to normal activities, rather than being bound by the fairly rigid limitations that I have right now.  Fingers Crossed!

I did start a handwork project, not knowing how long it would be before I could get back to my spinning wheel.  I started this to use as a possible class sample.  I could do it sitting at a table, by hand, using 19th century period techniques, since I couldn't get to or use my electric or treadle sewing machines.  However, when I offered to teach the 2 classes to a local historic teaching event, it came with a caveat that I wouldn't be cleared to drive for a couple more weeks at least.  I'm guessing that the event coordinator didn't want to risk my having to back out, since they didn't ever get back to me.  Their loss, but now I have to figure out a way to entice me to finish the samples and put them to use. 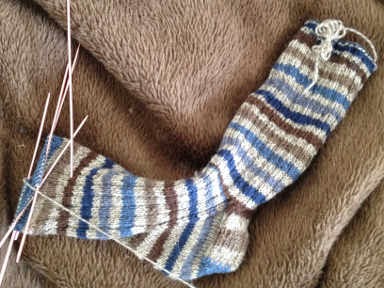 I have done a bit of this too.  Actually, I've knitted 2 socks, just different yarns.  Both were started before the surgery and I am ready to finish off the toes of each sock.  However until I can actually check the fit, I'm having a bit of a personal issue finishing them up.  I shouldn't really.  I can do this all with math but there is something quite satisfying about trying on the sock and knowing that it fits.

I had great expectations about how much I'd get to knit during this time.  I had not 1 but 3 sock projects with me at the hospital and knit exactly 2 rows, since I really kept just falling asleep.  It felt like I slept for 3 days solid, which I pretty much did.  At home, it hasn't materialized as the fun, gotta finish up activity that I'd hoped for.


Mainly because of my spinning wheel.  At the 3 week check up with the surgeon, I asked about spinning.  He delighted me in the fact that he actually knew what a spinning wheel was and what the physical movements/motions were needed to use one.  I got the all clear to start spinning.  It took me a few more days to actually get the right chair and wheel in place.  I had to switch from the Sonata, which has the flyer at the rear, which would have required me to bend in one of those prohibited ways, back to the Minstrel.  It has the flyer at the front, ergo no bending to reach it and the treadle angle also allowed me to maintain that necessary less than 90° angle. 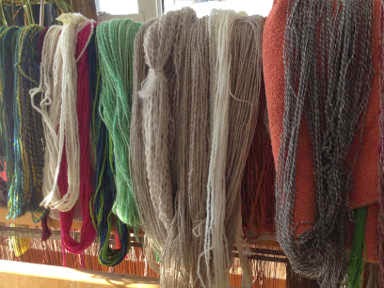 What amazed me is that while I hadn't been able to sit and spin for more than a few minutes at a time since last summer, I was suddenly having to remind myself to take breaks.  I could really spin again, which has been so wonderful!  I've been pounding out the homework samples for level 5.  I still need to mount them, but once I am allowed to bend and stretch a bit more, (fingers crossed for next week's appointment),  I'll be able to access the printer and other needed materials, to get that done.   Right now, spinning is feeling wonderful.

Of course after having someone around home with me for several weeks, I've needed voices on during the day, so have been having a Buffy film fest while spinning.  I can spin all morning and into the afternoon, until my cat decides I've had enough.  He tugs on my arm, gets cranky and whiney, until I lie down with him for a bit, while he stretches out on my healing leg and sleeps, forcing me to slow down.  I chock it up to necessary healing time.