I needed a winter toque.  Someplace in the move over a year ago, I lost my toque and despite a whole year of looking, okay not looking really hard, I still have no idea where the winter toques and extra mitts were packed.  I've replaced the scarves and most of the mitts, but decided I needed to knit a new toque for myself.   I was hard pressed to find a pattern that wasn't too fluffy or complicated.   At the Ealdormere Kingdom Arts and Science competition, Jane had knit a very cute pair of Scoggers, or arm warmers based on a find from the Mary Rose.   This inspired me to look at Tudor cap finds.

The Monmouth cap was known by name in the mid 16th century, but probably dates back to the 15th century.  The cap, first knit in Monmouth, Wales, became a staple clothing item for middle class English, workers, sailors and soldiers alike.  One existing cap is made of rough, two plied yarn, with only 59 stitches for a 22 inch circumference.

I wasn't going to use rough yarn because I'm still in the midst of spinning for the hood project and my spinning wheels are in use.  I don't spin yarn that thick on a regular basis.   I have loads of yarn around but nothing in that grist.   I dug out the walnut dyed yarn from earlier this fall.  The pictures I looked at, show the hats features fairly clearly and written descriptions are quite detailed as well.   Some have a button on top, some don't.  They seem to be fulled and have a hanging loop at the bottom.  They have a doubled brim and fit quite closely.   So, I knitted up a swatch and figured out what gauge I'd need and went from there.  It seems to be a fairly straight forward project. 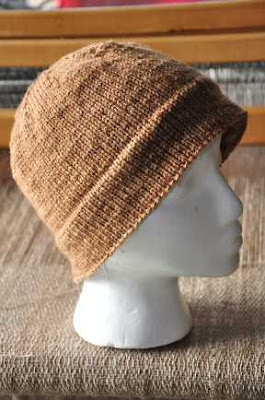 Materials - Paton's Classic Wool - 1 skein
Needles - 1 set double points, 1 circular needle..  I think it's in 4.5 mm but the needles are ancient or scrounged and I've no idea for certain.  I'll edit the size when I actually get a needle gauge and know for sure.
Gauge- 5 stitches per inch  ( more important info than needles anyway!)

This is the brim.  The row of purl stitches makes a convenient fold.  Fold brim up to the inside of hat.
Matching row for row, pick up one stitch from the bottom edge (now folded) and knit together with the working stitch of the same row.  Work the entire hat brim this way, catching each row  to the hat body.  This creates a finished edge and no need to sew the brim to the hat later.   Keep track of the marker for the start. 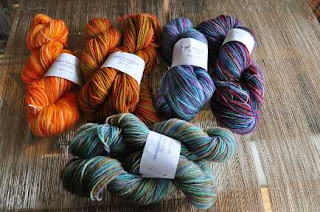 The sock yarn is all skeined up and ready to go.  I've labelled it as well, so all I have to do is to remember to pop it in my bag when I'm heading out to work at the Guild sale tomorrow.   I'm really happy with all the results.  Even the hank of yarn that I was only somewhat happy with, looks really good when in a proper sized skein! 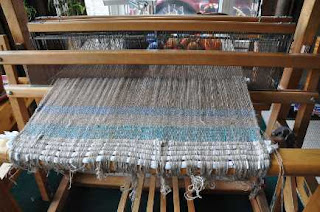 Notice that the skeins of yarn are setting nicely on warp threads?  Yes, I know I shouldn't set them there, but it was where the light was best on this dark, gloomy, autumn day.   And yes, they are indeed warp threads!  Handspun singles, all nicely sleyed and threaded through the heddles, checked for errors and test weaving done!   Yes, indeed, I am ready to start weaving the hood project.   As much as this has been an intriguing project, it has taken a long time, with too many interruptions.  I will be happy when it is woven off and I can put something fun and colourful on the loom.
Posted by Nina at Friday, November 19, 2010 1 comment: 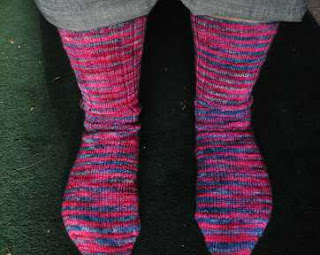 I've finished the pink socks!  They are bright to say the least.  I'm quite happy with them.  Those socks will be the perfect accessory for a miserable, grey, stormy winter day.  Taking pictures of one's own sock clad feet is still an art I need to perfect. 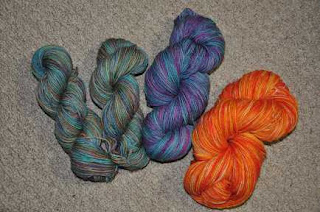 I've dyed up 500 grams of sock yarn, using weak acid dyes.  This is enough for 5 pairs of socks.   I'll be selling these at our Weaver and Spinner's Guild sale this weekend.   I'm thrilled with the results of 4 of the skeins but the 5th is just okay.  Here are the first 3 wound into skeins and ready to be labelled.   These are all ones I really like.   The one wound into 2 smaller skeins one I'm not sure I want to sell.    If only I'd written down the colours I'd used....  Honestly, it's not quite as bright as this but I forgot to take the camera off the vivid colour setting that I'd been playing around with.

There are two more really long skeins, waiting to be wound into regular skeins.  Tomorrow I'm hoping to dye up some roving to sell as well.   I had to run into town today to pick up a new scale as mine has decided to bite the dust.  Considering it was about 10 years old and a well used little kitchen scale, I don't feel too badly about it's foray into retirement.  I'm thrilled that my new little scale is simpler to use, seems more accurate and was less than half the price of my original one.   Now maybe I can get some soap made too.
Posted by Nina at Tuesday, November 16, 2010 1 comment:

I've been soooo busy lately, that I had nothing really ready for waiting room projects.   Having to do just that, wait around for appointments, I decided to toss another pair of socks on the needles.  Socks are perfect waiting room projects because they don't take up much space and unless I'm doing a particularly complicated design or stitch combo, I don't need a paper pattern at all. 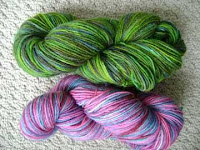 It had been grey and miserable out for days and I decided to knit up a bright pair of socks.  The only really obnoxiously bright yarn I had was a variegated pink and blue number I'd dyed last winter.   I had been going to try to sell it at the Oxford Weaver's Guild sale in a couple of weeks but decided I'd rather use it instead.  I started with just a plain ribbed pattern to test the yarn out and see how the colour variegations worked.   By the time 2 days of waiting around for appointments or meetings was done, I had too much on the needles to rip it out and start a new pattern, though I had one all ready to go.  Next pair, I guess. 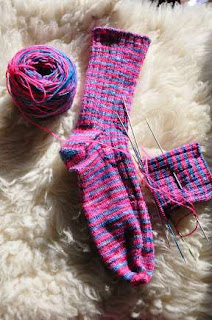 My friend Suzi convinced me that I should dye up a few skeins for the guild sale anyway.  She really liked the colours of this skein.   Results of those new skeins should be forthcoming rather soon since the sale is only one and a half weeks away.

New curtains in the livingroom have currently thwarted my heddle threading endeavours.   Once I move everything back in their rightful places, I'll be able to access the loom again.   A few days of glorious sunshine have made reorganizing furniture a less that glamourous and undesirable activity.  On the other hand,  hanging laundry, mulching the last of the fallen leaves and scrubbing the chooks water fountain, have  all been activities on the highly desirable list right now :)
Posted by Nina at Wednesday, November 10, 2010 1 comment:

On Comforts, Cuteness and Doneness 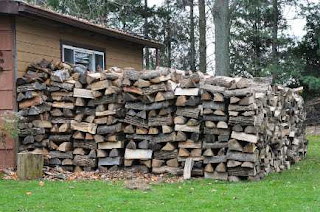 The wood is in for the winter.  We fetched - okay, that just seems wrong using fetch in the past tense - we picked up 20 cord of wood from our supplier, brought it home and stacked it.  It took a couple of weeks in total, although most of that was over the past few days.  People here are sore and achy from shifting and stacking.  However it's done and we're set for the winter. 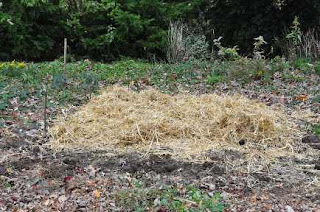 The garlic is planted.  It's late, I know.  It should have been in the garden 3 weeks ago, but one thing after another and I only really had the time to do it today.   At least it's in.  I mulched it with straw in hopes of protecting the new cloves at least a little bit. 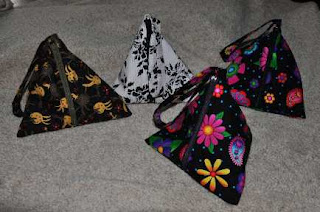 I made these little bags yesterday.  Are they not one of the cutest things ever?   A gal at the spinning course had several she used to hold equipment.  I had to try them.  They're fully lined, not difficult to make and I'm all for the cuteness factor.  I'm going to use one to carry my current sock project in and another will be gift wrap for a small present. 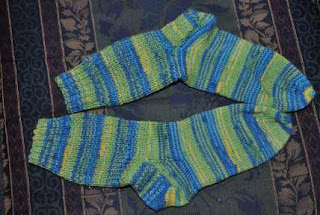 Done... socks for someone else...  They started out for me but were claimed by another whom I love enough to let that happen.  Yes, that means I need to start another sock project to put in the above cute little bag.
Posted by Nina at Wednesday, November 03, 2010 3 comments: