Finally off the loom 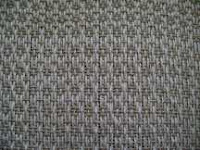 After a lovely few days of family and friends, I was finally able to get the towels off the loom. I'd hoped to get them done before Christmas, but best laid plans and all that... it just didn't work.

They are hand towel sized, with a really nice soft hand and while I really enjoyed working with the natural coloured cotton, off the loom it looks totally impractical - white towels, what was I thinking? This is the pattern sample while still on the loom. I was checking for threading errors and finding out how hard to beat the weft for the 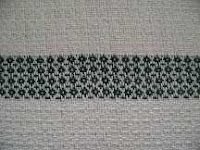 results that I wanted.

When switching to the actual project thread, white on white with a coloured border stripe, suddenly the pattern just becomes a nice bit of texture. When the towels were done, I took them off the loom and stitched between each one on the sewing machine, tossed it into the washer and dryer to wet finish them and cut them apart. They are now waiting to be hemmed . Normally I put off finishing them but at least one of these is to be sent else where - okay, 3 or 5 of them, so I'll actually get the hemming part done promptly. 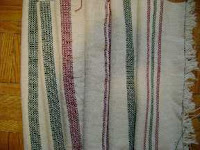 Next project? Hmmmm.. well I want to do a 3 colour basket weave project, just to play with a bit of colour. I've 2 shawls to weave and some natural coloured linen singles waiting their turn as well. The problem is that I want to work on all of them next and can't decide. There is also a scarf project in the planning for one of my boys who requested it. I'd totally do it next but alas, the yarn stash doesn't have enough of the desired colours. 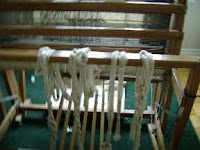 Yesterday I started this. It's simple tea towels, just as a get going project. It's natural 2/8 cotton. The pattern will be a simple diamond twill, easy to weave during busy times. The borders will be in various colours, to show off the weave and coordinate with various kitchens. I love the color of the natural cotton! Only a 5 yard long warp, so it won't take forever to weave off. With kids coming home for the holidays, my sewingroom will become a guestroom as well. No use having a project on the loom that I'm desperate to finish while the room is being occupied.

Today, a quiet knock came at my front door. A delivery person dropped off a huge box. After pulling out giant staples, crumpled newspaper and styrofoam sheets, I cut off the large plastic bag. I had to untape a gazillio 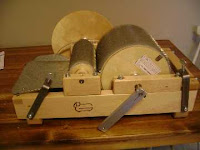 This is all moments after a call came to tell me we have a house viewing at 9 am tomorrow! I have a new project to get on the loom and a new drum carder to play with and now I get to clean the muddy footy prints off my kitchen floor all day because it has rained all night and the snow has melted, yard defrosted, leaving lots of mud for my puppy to play in!

Okay, so I did take time to try it out... sigh... happy me.... It's lovely. Not only is it pretty to look at but it seems to be very solidly made. It's a Patrick Green Deb's Delicate Deluxe . This drum is for finer fibres but they have an interchangeable drum for long, stro 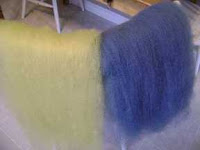 ng fibres as well, which I didn't get. The service was quick and the lady I spoke with on the phone incredibly knowledgeable and friendly. On top of this all, it is a reasonably priced drum carder. This means that I can actually process some of my fleeces manually instead of sending them out and still have time to get fleece to projects done. I was going to say it's like Christmas in December, but really Christmas is in December, so it's early Christmas..
Now to find a safe place to stash it so visiting little hands and inquisitive kitty cat won't find it :)
(The blue batt is merino dyed with Dyer's Knotweed - Polygonum Tinctorum last fall. The yellow is Shetland - Jessie, dyed with Dyer's Broom just a few weeks ago.)
Posted by Nina at Monday, December 15, 2008 No comments:

The mystery fibre is spun. It spun easily and the separated colours showed nicely rather than the dull grey when spun together. I had a photo of the skeins, in which the colour differences were actually distinguishable, but I saved it someplace safe and can't find it right now. I started nalbinding some mittens as I can't find mine anywhere. I realized that it was going to take a tad longer than I would have liked as I find nalbinding quite slow, so I knitted up a quick pair just to keep my hands warm while I finish the nalbinding.
The mittens are the same size but the col 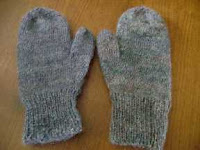 ours are slightly different, one being more blue than the other. I don't use a pattern for plain mittens. My mother knit a gazillion mittens and I think I just absorbed how to knit a plain mitten as a kid. I used to jot down the numbers for the first one so I could duplicate it, but I don't even bother with that anymore. The one thing I did do with these mittens is use a needle size about 2 or 3 sizes too small. As well, I adjusted my tension so it was overly tight. For mittens I find this makes a very warm and windproof mitten, without having to felt it, which I find stiffens up the mittens to much.
The scarf on the loom is taking longer than I'd like mainly because I'm trying to be a conscientious mom and not wake up my son who is working nights. My loom gets to be a tad noisy when I get into a rhythm and since I use a drill as a bobbin winder, I worry about that noise as well.
I'm expecting some fleeces back from Wellington Fibres anytime within 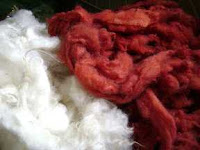 the next month or so. I was told to expect them in January. It takes a while for them to process fleece, but they do it so very well that it's worth the wait. I've been washing one and dyeing parts of it though I've been warned that I should think about putting it all away. I think it looks quite festive and rather Ealdormerean as well. I'm still running that madder vat and still getting lovely colour!
Posted by Nina at Tuesday, December 09, 2008 No comments:

I decided that I needed to do some dyeing. The previous blue, green, grey and orange fine wools needed to be augmented with yellow, rusty red and a dark colour - dark grey or black. The latter will have to wait until I get an appropriate coloured roving however I thought that perhaps the Dyer's Greenweed might still yield some pigment, despite it being late November and having had well below normal temperatures with lots of snow.

After 2 trips to the storage locker, I finally found the dye pot and scale, that I'd left in a "handy" spot -meaning near the front, in a plastic storage bin without a lid so nothing coul 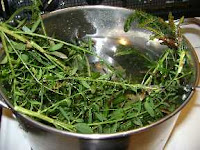 d be put on top of it. Hubby grabbed a white fleece from the storage locker as well. It turns out that I'd put all the washed fleeces in proper bins and the only one we could see ended up being "raw" - but it's a nice fleece. So my house smells of raw wool, wet wool and freshly dyed wool once again!

The Dyer's Greenweed still had lots of hardy looking leaves, amazing since we've had a number of really cold nights (-12ish). The waxy l 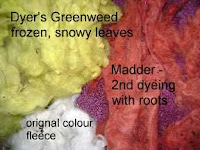 eaves hold up well obviously, although I'd just trimmed the shrubs back a few weeks ago to do a dye day with a friend, so there was no new growth. I got 100 grams and that included the woody stems - but it would be enough for a decent sample providing the pigment was still viable. I was totally amazed by the brilliant yellow. It is gorgeous.

I even did a quick woad vat, with leaves I'd dug up from under the snow. I've gotten useable blue pigment after snows and light frosts but there wasn't any blue left :( It was good knowing though that you only have so much time to get that last dye vat in with the woad.

Then I took some of the madder that I'd used earlier this year for the red wool that I turned into a dress. I had dried and saved the roots. Half were used at the above dye day and the rest I took home with me the other day in order to try out at home. I got a gorgeous colour and if I had a place to save the roots, I think there is much more pigment in them. That makes madder a really good option for dyeing, with multiple colours available from multiple uses of the roots. 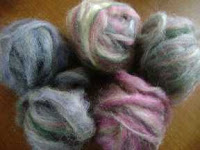 s I'm running out of handy spinning fibres, I took some of Wellington Fibres mystery rovings and started spinning them. It was a blend of colours, mainly blues, with some greys, black, greens and red. The first ball of the whole roving was a grey with a few highlights. I thought it was rather uninspiring, so I separated the rovings into main colourways and spun them individually. They are much nicer now.
I even had time to make shortbread cookies for a meeting and had a great deal of fun making a mess while drizzling chocolate over them with a fork.. very fun and easy to over do it!

I had to miss Wassail due to hubby's company Christmas party. Since I ditched out of the last couple of Christmas parties with his former company and did the same with a family wedding to go to A&S (it's all cool 'cause he arranged it so I didn't have to do the wedding thing before I even had to think about it), I figured I should go. It was lovely and casual with kids running rampant around a small, independant winery, where we met for dinner. A nice meal and the only day with great weather since I got to drive home the 2 hour trip afterwards.
Posted by Nina at Monday, December 01, 2008 1 comment: