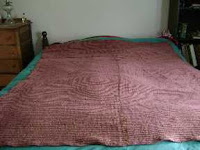 Sometimes I surprise myself when things that I perceive to be taking forever suddenly get done before I realize it. Part of it I think is that I often work in small spurts. When my kids were young, I often didn't have a long stretch in which to work on projects. I learned that by giving a project your whole attention for only 15 or 20 minutes at a time, one can make real progress. That is what I think happened with the blanket. In small spurts, it got woven, off the loom and wet finished in really good time. Of course the centre seam and the hemming took hours and hours. I was totally tired of iffy home decorating shows with designers making ugly "art" from felt cut outs and leaf prints, CSI and cooking show reruns - Why do they only play the same 6 episdoes I've seen, over and over? The centre seam was done by picking up the weft threads on one side, then the other, back and forth, running an "extra" warp thread through to connect them all. Nearly i 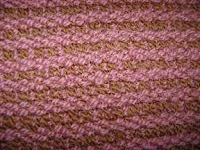 nvisible except for the fact that the alternating striped pattern caused a small pink line on oneside and a brown one on the other.

The yarn is labelled "mouton" - so wool and I think is 6/2. It's very soft and I had absolutely no choice of colours as it was a stash sale - so it was brown, grey or pink. The grey wasn't enough contrast for the pink and didn't look right with the brown. The brown and pink might not be my first choice in colour design, but it looks amazingly nice together. My son has told me that it is "red" and that he thinks he should have it. I take that as a compliment.
Posted by Nina at Tuesday, November 25, 2008 1 comment:

The other day, a friend asked me to spin her wool for a project she had in mind. It was to be small amounts of a number of naturally dyed colours. Of course I said yes. I'd been waiting for a project to get things back to normal. My spinning wheel was tu 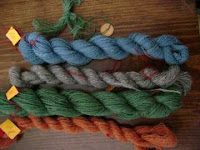 cked into a corner to "showcase" my lovely antique pieces. According to the realtor, this is important, even when your "antique" spinning wheel is only a year old! However, it normally sits out in the livingroom so I can use it whenever I take a break. You wouldn't believe how wonderful it felt to get the wheel back in action. I hadn't realized that I missed the relaxation of spinning quite so much.
At any rate, instead of spinning in small doses, I went on a spinning jag with something satisfying to show for it! I'm not happy with the madder orange. The colour is great but the fibre was very harsh and spun up with the same characteristics. The yellow tags are yardage amounts.

On the loom is a summer and winter variant from Cloth and Clothing in Anglo-Saxon England - P. Walton Rogers. It really isn't a true summer and winter as it doesn't have the tabby tie down, but it's fun and easy. It makes a very interesting rib pattern which I can't 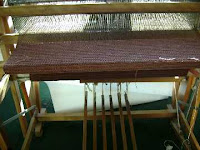 wait to see off the loom. It's been interesting weaving something nearly the full width of my loom as it is quite a stretch for me- a Teridactyl arms reach I don't have! For some reason I didn't think it would take as long to weave off as it is taking, but there have been a bunch of distractions. I've already a huge list of projects in the wings so maybe it is just that anticipation which is making it seem like it's taking longer.
On the other hand, having a blanket which will fit on a queen sized bed, even though it will have a seam down the middle, will be pretty nice to snuggle up to.
Posted by Nina at Wednesday, November 19, 2008 2 comments:

From Helen's website -"I have been tagged! Apparently I have to list 7 little known facts about myself and pass the baton on to 7 others."
I don't normally do things like this, or chain letters etc - mainly because I worry about being a nuisance to others and because I'm pretty shy most of the time and am not overly comfortable with opening up right away. However, after thinking about it, I decided to throw my concerns to the wind and try it...
7 Little Known Facts About Nina - who may also be known as Odette.

1- I have 4 children - They are all grown up
2- I own a Klingon dictionary
3-I hate sitting around not doing anything - okay, you might have suspected it but you know for sure now -
4-I like dolls -antique porcelain and ball jointed dolls - have done so since I was 2 years old!
5- I hate going barefoot
6-A dog ate my wedding cake -
7- Dark chocolate and bitter sweet chocolate are my favourites

My apologies to those whom I am about to inflict with this..
Karen, Tammy, Cate Sorry, there are only 3 of you whom I have blog info for and feel comfortable in passing it on :)
Posted by Nina at Tuesday, November 18, 2008 No comments:

Winter is setting in and the garden has been put to bed for the season. I've pulled more junk out than I expected, transplanted a few things to a friend's farm and ended up digging up all the madder. I had hoped to transplant it at the farm as well but an ill fated wind blew through the night I'd dug it up. Despite leaving the roots heavy with soil, most of them had started to dry. They ended up drying out in the barn instead. 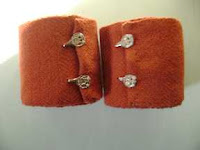 re are the finished wicklebander! They took a lot longer to weave than I expected. They are really pretty, soft and quite light in weight. They were finished for hubby's birthday. He seemed happy. I mean what man doesn't want a set of handwoven wicklebander for a birthday pressie?

The linen thread singles that I'd spun a while ago were beckoning me. I had some cotolin thread which I used as a warp. Once again I was told that weaving with linen singles, 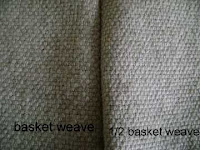 even for just the weft would be a trial and extremely difficult to work with. Well these singles were strong. I had to use scissors to cut them. Once I realized that, I didn't worry. I did weave with them wet. Everything I read said to soak the bobbins overnight and keep the room at 50% humidty or mist the warp occasionally. Even with the cotolin, I misted. The linen singles did work much better if I soaked them for a few minutes and then let them set for an hour before using.
I w 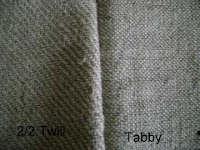 as told linen was really hard to work with and difficult to weave with. I found it non of the above, providing I kept it damp. When it dried, it was slightly more fussy. The one concession I did make was with weave structure. I had wanted to play with huck weaves. Unfortunately they were a bit more fussy to thread. We had an open house and some viewings right about the time I needed to get the project on the loom. Instead I went with a straight twill threading and did 4 different structures; tabby, 2/2 twill, basket weave, 1/2 basket weave. The tabby, 2/2 twill and one basket weave cloth had handspun linen weft, the remaining basket weave and 1/2 basket weave used cotolin weft - cotton linen blend. It shrinkage rate was quite different between the two fibres. They aren't gorgeously pretty due to the natural linen colours, but they will work well camping in the summer, for covering food and drying dishes.
Posted by Nina at Monday, November 10, 2008 2 comments: