I've been planning to do a project using double weave -  a weave structure where you weave 2 layers at once.   This can be to bring up secondary colours into a project which wouldn't normally be possible, or to make tubes, attaching at both sides or in my case, because I want a double wide fabric, without having to stitch it together, I'm going to be attaching it at one side.   It's going to be a wool blanket/cloak.

I wanted it to be brown.  I have brown wool, but it's the wrong weight.  In the wool I had planned to use, I only have dark green, white and red.  I realize that if I did the warp in green and the weft in red, it would likely appear brown from a distance, but when I twisted the two yarns together, there was still to much contrast for me.  I didn't want a green and red flecked blanket!   So I decided to dye the green.    I looked at my large cone of wool yarn which weighed about a kilo and realized I'd have to skein it off before dyeing.   I figured I'd skip a step and dye warp chains.   This is a valid way to dye and often is used in painted warp techniques.

As I was winding my warp, I realized that this was a good time to document some of the ways to do this, or at least the way I was doing it this time.  In order to let the dye circulate around the fibres, instead of choke ties, I use figure 8 ties.   They keep the warp in order but still let the dye reach all the fibres.  If you don't do this, you'll get tiny white spots... ask me how I know! 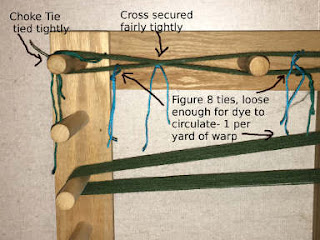 I do put a choke tie at each end of the warp.  I tie it really tightly.  This keeps the warp in order it two places, so I can shake it out and still have control.  I also tied the centre of the cross securely, although not so tight it's bunching together.  Just enough so it's flat.  There may be a bit of white there, but it's in the thrums or loom waste, so it's fine.   I could tie at least the two cross ties near the very end tightly too, but I sometimes find it squashes up the warp for a bit down the line.  Since I wasn't as generous with the loom waste as I usually am, I used figure 8 ties to be certain.

The figure 8 ties down the rest of the warp are at least 1 per yard.  I'd rather have two many ties, than end up with a tangled warp.   Painting the warp and steaming it has little movement of the warp, so it's safer.  However I'm kettle dyeing this, so tangling is more of an  issue.   Better safe than spending hours untangling.   It's not like I have tons of extra yarn as I had only 1 cone of the green. 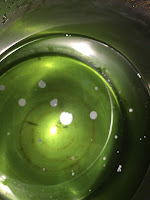 I had 5 warp chains.  Only 100 threads would fit on my warping board smoothly and I was fine with that as it would dye more easily in smaller bouts.  Two of the chains were for either side of a single warp strip to be on one end, so they were specific numbers to make up the width.    I stuck them in a pot of warm water to soak all morning.   When I decided to dye, I'm glad I took them out of the pot because this is what the water looks like!  YIKES - that is a lot of green. 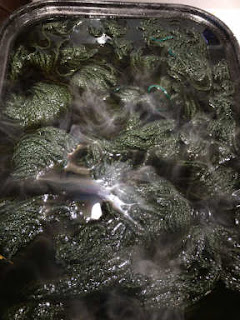 I ended up changing my process slightly because of this dye running from the original skeins.  Instead of dyeing in a deep kettle, where I was going to have to do 2 carefully calculated batches to hopefully the same colour, I used the pan I use for low immersion dyeing and zig zagged them fairly close together.   I doubled up the vinegar but the same amount of salt and will add half the vinegar to start and the rest, half way through.  I have a few concerns that something will not work right. The brown dye seems to have absorbed but there is still green seeping into the water.   The yarn has no brown to it yet.   I will play around with adding some red to it as well, since red and green make brown. 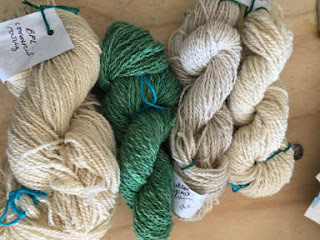 Here are some squishy, dense, fat yarns that I'm spinning up for sample rug hooking tests.  The two from the left are nice and were nice to spin.  The third white one, was kind of icky.  It was a commercial roving that I didn't like at all.  It was easy to spin though.  I may save it for a beginner spinning class as it gives good results.  The last one is a nice yarn but oh, so much work.  It was the fleece I've been washing.  After that found that it was best to run it through a drum carder and then to comb it to get the VM out.  Most of what didn't come out in the combing, came out in the spinning.   A lot of work in comparison to the finished product.

Busy work for those long dark days of winter 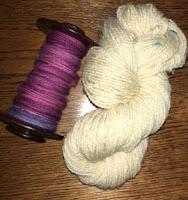 Much spinning has been happening.   The white is some regular BFL.   I've now got a bit under 500g spun in a similar weight.   The pink is one of my fall dyeing experiments which is mainly pink and purple, with some decent bits of blues and mauves.   It's a superwash BFL.   Both spun up nicely and when I sit down to it, quite quickly.    The white is about worsted weight while the pink is really fine and should be somewhere in a light sock weight/lace weight.

I've gone on a bit of a wool washing binge.   I don't really like to wash fleece in the winter but this is a medium grade fleece of unknown origin and I have need of something less fine that all my pre-processed fibres.  It's really too coarse for wearing close to the skin.   I'm going to spin it up for rugs, so it's perfect for that. 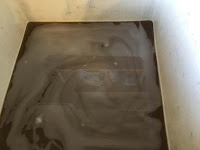 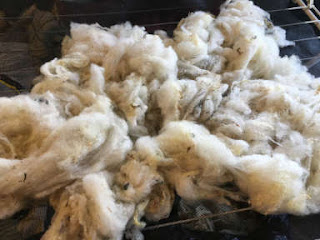 This is the first wash water - ugh, it's really, really dirty.   It's only taken 2 washes though to get the fibre clean.  The first batch only took 2 rinses as well.  It's fairly low lanolin, which really helps.  The second batch though, I used too much soap, so it's going to need a couple of extra rinses.  It doesn't take that much extra actual physical time, but does take up a lot of waiting time.

There is lots of VM in it so I'm thinking this will be run through combs for processing.

Kevin has been inappropriately interested in my large trash bag of fibre and it's been a chore to keep him out of it. 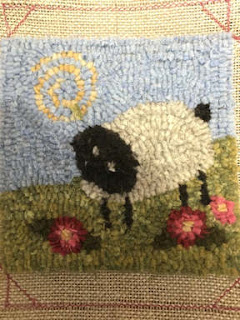 I took a rug hooking class the other day.   I finished the actual project, except for rolling the edges.   It was a lot of fun.  The black wool strips were cut a little bit on the bias, so they were very shreddy.  It made them fluff up a bit and combined with my lack of experience, made my sheep's ears disappear.  Still, I'm happy with how much fun it was and how quickly the learning curve was.  The class was pretty good and covered lots of information.  I think the only things missed were different ways to hold the hook, in which it was mentioned but never demonstrated, and how to actually tension the fabric in the hoop, which may or may not be an issue if you get it tight enough to start with.

I'm going to spin up some yarn to use for rug hooking, as it seems like a good way to use up bits of yarn and fleeces which may have no other use.   But if you have scraps of real wool fabrics, I'd love to have them.  They don't have to be awfully large as there is lots of shading and dyeing of mixed lots to make up the unique colours.