My time over the past few weeks was taken up by an SCA  arts and science event that is normally a long weekend camping event.  However, with pandemic precautions and still under a state of emergency order with gathering prohibited, we moved the event online.   This was the 13th event in a row and Loki wreaked havoc.   Misinformation given to our tech steward was incorrect, requiring her to revamp the whole process overnight.   The next day, the platform we were using crashed for parts of the whole world, and yet our tech people dealt again.   In the end, although a lot of extra work for those working the tech end, it was a great event.   Should we ever have to do this again, I will put out offerings for whatever gods I can think of, and for Murphy, just to be on the safe side 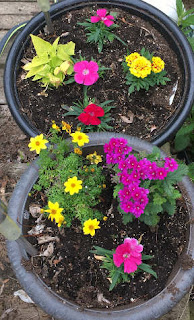 Finally, the winds have stopped, the rain has eased off, the snow has gone someplace else and I've been able to play in the garden. That's practically all I did this week.   There was much weeding, a bunch of planning and a trip to the garden centre.   I was worried because people here seem to think that social distancing is passe, but it was almost empty when I got there, so I had an uneventful trip.   Although the gal at the checkout tried to not sell me a hose nozzle, which I needed and was more than happy to spend $20 on it, so I didn't have to go to another store.   It turns out that it was well worth the money, so I'm happy.

I need to pick up a couple of herb plants.  Basil, because I forgot to plant seeds, parsley, because purchased plants always seem to grow better than mine, maybe oregan, and Lavender if I can find it.   With the pandemic and the cold weather, everything seems delayed.

I will plant beans, zucchini and cucumbers this weekend, plus one more planter of flowers perhaps, if I can find ones I like at the feed store.  Lettuce and peas were planted in March and are doing nicely, albeit a bit behind due to snow and frosty weather between then and now.   Multiplier onions are almost ready to harvest and the dutch set storage onions are all planted.  Tomatoes are in the ground, the Dyer's Knotweed is planted and the strawberries are starting to bloom.   I'm keeping it simple this year. 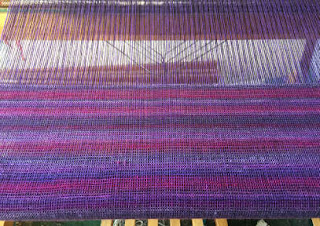 I wound a warp of 2/8 cotton in black and in purple cottolin.   I got it on the loom and am now weaving with the handspun varigated yarn I spun a while ago.   I'm thrilled with the results.   I'm not rushing it particularly, but am enjoying the process.  It is like weaving a sunset.

It is a bit difficult sitting down at the loom when the weather is perfect to be outside and playing. 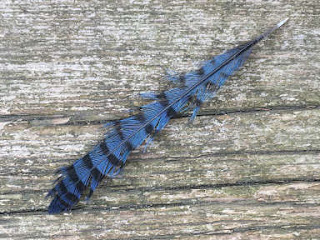 We found this Blue Jay feather on our deck. So pretty. 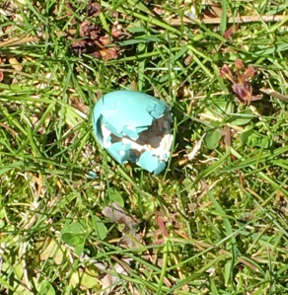 I was out walking and found this little freshly hatched Robin's egg on the lawn. 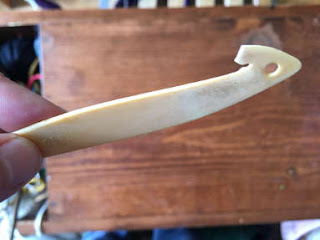 I've no idea where I put my lovely brass reed hook, so I had to use the plastic one.  That makes me a bit sad.  The tip broke on it.  It still mainly works, but it's a bit icky to use at the best of times.  Now it's ickier and trickier. That makes me  a bit sadder.
Posted by Nina at Friday, May 15, 2020 No comments: 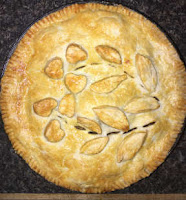 I made an apple pie.  I was playing with 1830 -1860 recipes.   Lots of them are pretty interesting and a bit different.  But some are really what you'd think of as a modern apple pie.  Many use puff pastry instead of a short crust.  I didn't have any puff pastry, or extra butter to make it, so I used a short crust.   The recipe uses much less sugar than a modern pie, and nutmeg as the flavouring.  It was delicious and didn't last very long before it disappeared, so I'm guessing I'm not the only person who liked it. 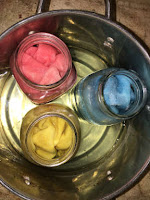 I did some dyeing in mason jars.   This is wool fabric rather than yarn.  It's pretty easy to do.
1-presoak the wool
2- set jars in a pot of water like a double boiler. Next time I'd use a trivet in the bottom of the pan, just in case, but I didn't have any issues without it.
3-Add water with half the vinegar you are going to use to the jars
4- add the dye stock to make the desired colour and depth of colour you want.
5-stuff the wet wool into the jars
6-heat the jars slowly until the water just below a boil.  After about 30 minutes, stir in (a plastic chopstick works well) the rest of the vinegar and simmer for another 30 minutes 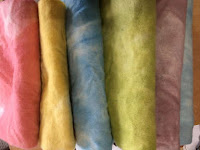 7- let cool in the water and when room temp, rinse, gently squeeze wool in a towel to remove excess
water ( or spin in your washer)
8- if fabric for rug hooking, toss in the dryer.
If for some other reason, hang to dry. 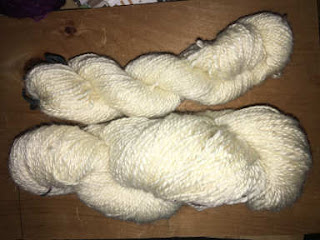 Merino and silk blend.  It was seconds so I don't know the percentage of either.  However it was super slick and has huge lustre.  You could see the silk in the roving.   It's lovely, lovely, lovely, despite me having to hand card rolags because the roving was a little iffy in places.   This is a worsted weight.  It's going to become a toque.  A lovely, warm, lusterous winter hat. 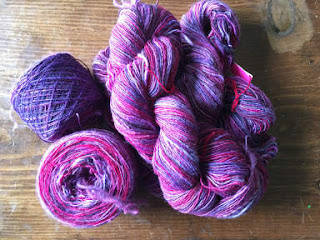 I spun this up years ago, meaning to weave fabric for a vest.   It's singles that are slighly larger than 2/8 cotton but not as thick as 4/8.   It's polwarth I think.  I had picked up 500g at a show and was going to order a second batch, when the company announced they were retiring and there was nothing more available.

I had wanted to weave it so it was a random plaid pattern as it's a variegated yarn.   But I was going to need more than 500g, so the bag of singles got set aside.   I dug them out yesterday.   I'm winding a warp of 2/8 cotton in black and the same weight of cottolin in purple.   I have about 2500 yards of the varigated wool.  We'll see what happens.   I'm only putting a short warp on the loom - 20 in wide by 6 feet long, so I should have enough singles. I will admit I'd have preferred a wool warp for this, but nothing suitable is in my stash, no black or similar colours of roving in my stash, so I'm using up what I have.

I'm tired of snow and cold weather.  It's May and supposed to be spring! 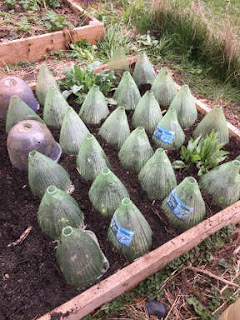 I started some woad seeds a few weeks ago.  The seedlings took forever to germinate.  The weather however has been generally cold and wet, with tons of wind.  I put the seedlings outside on the  few good days, but when it was hovering at just above freezing, with rain, winds and egads, even snow and ice, I had to keep them inside.  They started getting leggy, so much that I worried the stems would break. They were much smaller than I'd have liked, but I got the cheap plastic cloches from storage, prepped the bed and planted the woad seedlings out.  Of course this week the weather is supposed to be well below normal in temperatures, with frosts and possibly some snow.   I think I'll have to cover them at nights, just to help them out a bit.  I left a couple of plants from last year to go to seed for future harvests.

The lettuce and peas that I direct planted in March are now coming up!  They do like this cooler weather.  I'll plant more lettuce seeds in a couple of weeks for multiple harvests. 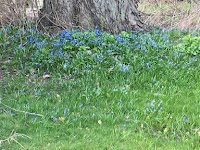 The Scilla is starting to grow out to carpet the lawn in the spring. It is so beautiful with that blue colour.  I'd wanted to do this by planting Crocus bulbs through the grass,but hubby wasn't impressed by that idea.  This however is happening courtesy of Mother Natures, so I'm not complaining and he's putting up with it. 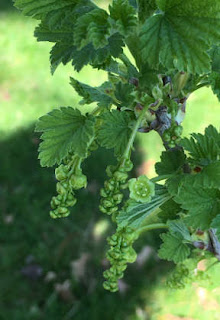 The black currant bush is starting to flower.  I had issues with the European black currants that I'd planted when we first moved in.  They would flower early, we'd have a few cold days and the flowers would drop off before they were pollinated.  Thus I had huge, healthy bushes and never any fruit.   My son dug those up for me and I replaced them with North American currants, a similar plant but supposed to be much hardier.  Last year I had a handful of tasty berries which I ate off the bush.  This year it seems to be loaded.  I hope the weather this week doesn't harm the flowers.   There is a volunteer currant bush on the other side of the yard, which is at a similar stage of development.   I'm hoping it's a black currant bush too.  The red currants aren't flowering yet, so fingers are crossed.

The hyacinths are blooming.   It's been such a cold and windy spring that there hasn't been one of those warm, still days where I can sit out on the deck and just enjoy the hyacinth scent.   No days like that in the next week or so weather forecast though.  I hope the blooms may last long enough for at least one cup of tea with hyacinth perfume wafting through the air. 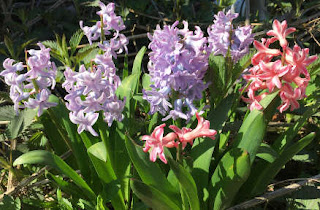