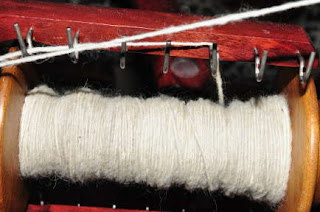 I've started spinning the 60% Merino/40% Alpaca batts.   I am spinning to get somewhere around the knitting worsted or a bit finer.   We'll see how much bloom this yarn has.  It is very white, so if I'm going to make something for me to wear, I'll have to dye it. 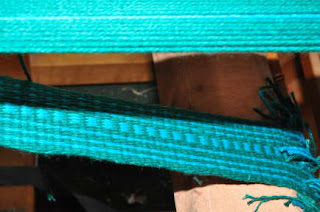 The guild has a green challenge for the March meeting; to make something green or with green in it.   I'm weaving what I hope will be a guitar strap, however I put it on the floor loom instead of the inkle loom which has both good and bad points.   First, it's easier to treadle than to keep lifting and pushing down the threads,  especially since this thread is fairly sticky and because I still haven't made heddles for the inkle loom which are the correct size.   It's hard to keep it from pulling in too much.   I have it set at 40 threads per inch, but it should likely be a bit wider sett.    The contrast isn't quite enough, but since I was working with a green theme, the only other colour I had which would have worked was pink.  I was fairly certain that the recipient wouldn't have wanted a pink and green guitar strap.   There is a threading error, but the backside is correct, so I left it. 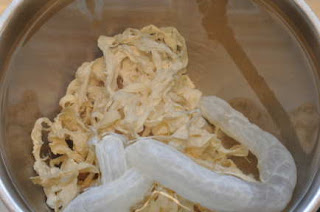 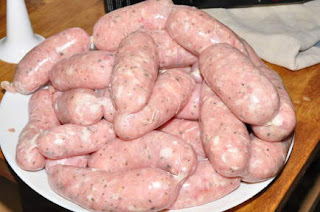 I found sausage casings in the grocery store of all places.   They are salted and in a little plastic salad takeout type container.  I wanted to only soak half of them, but they were actually knotted up in the container.  I was worried both about ripping them, and how to store the ones I had separated but was not using.  I ended up soaking all of them.   I know now that since the sausage casings are heavily salted, I can just pack them and the salt back into the container and store in the fridge for several months more.  Luckily, they still had some this week, so I purchased another packet of them for future use.  These things are fairly difficult to source in this area.

I was soaking them because I'd found pork loin on sale and turned one of those huge slabs of meat into sausages.   Next time I'd use more fat, but although a bit dry they are tasty.   I was playing around with fat content because I really am not fond of those really fatty, drippy 50% fat sausages.  I'd read you could go as low as 20% fat, but I don't think I had quite that much in this batch.  They were awfully good with gravy though.    I'd purchased a sausage stuffer attachment for the stand mixer at a ridiculous price, but there were only 2 of them in the store and I'd never seen them before.   It was worth every penny of that ridiculous price as I was able to grind, mix and stuff the sausage casings by myself.   It was a bit fussy and for sure, would have been easier to do with 2 people, but wasn't necessary. 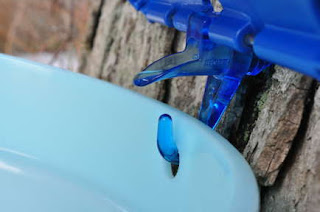 The weather has been warm enough that the maple tree sap is running.   We've only got 6 buckets up right now as it is still early in the season.   We've already got about 80 litres of sap collected so we're doing the first boil today.  We would have done it last night, but it was raining.   The only good thing about rain this time of year is that it has been warm enough that it isn't snow.  I shudder to think of how much snow would have fallen if it had been just a few degrees colder.   Then we wouldn't have that flooding which has been causing horrendous damage  in the area, but no more snow right now-  yay! Usually, when I have to wait around for appointments, I bring a sock project to fill in the endless minutes.   However, I didn't have a sock project either on the go or ready to go, so I substituted a pair of mitts.  A gal once described this sort of mindless, patternless project as a potato chip project - which does sort of fit since you just keep knitting without a lot of thought.   I had a lady say to me that she would never have the time to knit as she was sitting in the waiting room doing absolutely nothing, not even reading a magazine.   The lady with her large novel looked at me and grinned.   I told her how many socks I'd knit when I was just sitting around waiting for appointments.   She apparently reads through appointment waiting as well.  The lady doing nothing, still had nothing to show for her time, but I hope she was at least relaxed and refreshed. 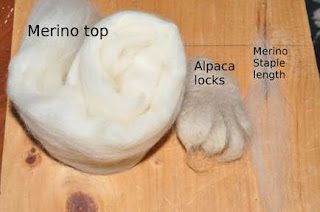 One of the guild members is an Alpaca breeder.  She spoke about Alpaca fibres last meeting and commented that any lock 2 inches or less was considered trash and unprocessable.   That is by machine though.   Hand processing those shorter lengths works adequately. 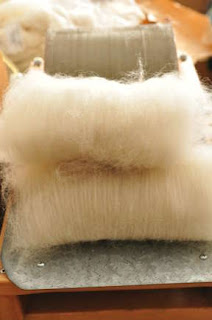 I dug up a pattern for a sontag from Peterson's magazine - 1861, spring issue I think.  It is different that most of the one's I've seen which are from a Godey's Ladies book pattern.   I'd popped out to get the yarn for the Peterson's pattern but it wasn't on sale and was $8 a skein, and I'd need about 4 or 5 of them.  I decided to spin the yarn instead, which will mean that the project won't be done when I wanted it to, but I'll use up stash fibre.   As this sontag will likely brush my neck, I decided on some Merino Top and Alpaca locks.  I have some lovely brown Alpaca in the same staple length of the Merino, but I didn't have enough brown Merino to be certain of having adequate yardage once spun.   The white Alpaca locks are short.  They are about 2 - 2 1/2 inches long.   They hand card nicely enough but I ran both through the drum carder, sandwiching the Alpaca between layers of Merino.    This worked a treat and I have been carding up lovely, fluffy batts.   I'm using a ratio of 60% Merino to 40% Alpaca. 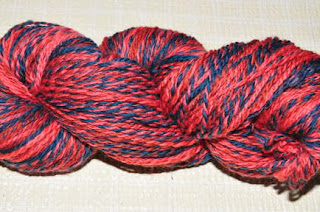 I got Alpaca from a fundraiser held for a member of the Edmonton Guild who had lost all her fibre equipment during the massive floods a few years ago.  They had Alpaca fleeces, mostly shorter length fibres for a $20 donation.  I was happy to donate and now I'm happy that I'm actually using the fleece.    I'll have to wash the yarn after it's spun as the Alpaca is definitely not clean.

The superwash merino rolags are spun and plied.  It's a pretty yarn, soft, squishy and colourful.   I've no idea what I'll do with it but at least it's done. 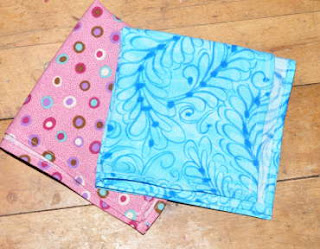 So I was told I had to do practically nothing for a week.  No spinning, no weaving, no banjo, nothing repetitive or requiring strength.   In between reading, and more reading, and reading some more, I made handkerchiefs from scraps of quilting cotton.   My daughter had made me one for Christmas and it is lovely to use, so I whipped up a couple more.   Of course hers was a panel square with a chicken on it.   I decided not to spend anything on these, so they are just plain fabric bits that I had on hand. 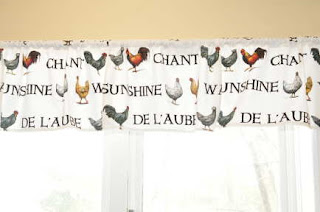 I found these chicken tea towels at the local box store.   I purchased two of them, and cut them in half.   I put a heading at the top and hemmed the two needing hems about the same size as the bottoms of the towels.   When I added the header, I made sure they were all the same size.  I think they make a cute valance for the kitchen.   I had a curtain rod but it had decorative ends which stuck out farther than the space between the window and the cupboard, so I had to get a new curtain rod.   It cost more than the curtains did. 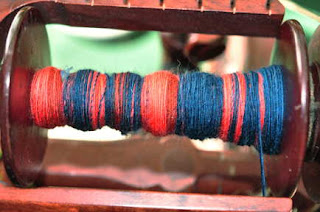 I was finally able to spin a bit.   This is superwash merino, blended into rolags on a blending board.   Whenever I use the board, I recall my introduction on how to use one, when a gal was doing a demo in one of the spinning classes.   She took all sorts of fibres and slapped them on the board, packing them in until it was overly full.   She pulled off one single huge batt, which looked wonky and horrible to spin.  I couldn't for the life of me figure out why anyone would do that or want to spin something like that.   Then I found a video showing how to pull rolags from the blending board.  This makes smooth, easy to spin and very pretty rolags,which I enjoy spinning.  So many different ways of doing things in spinning for sure! 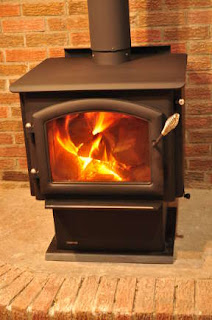 We have a second chimney in our basement.  It was slightly damaged and needed some repair but I haden't been able to find anyone to do it since we first moved here.  That is until a couple of weeks ago when I noticed an ad in a small advertising booklet which came in the mail.   The repair quote was reasonable, but it turned out that we couldn't use the old woodstove that we already had.   Nor could he hook up the cookstove that I had.   Options were a second hand stove from a big box store - cheap but would need replacing in a year or two by his estimation, or a middle of the road stove which would last for years.   Because the price was just within our budget, we went for it.   All was good until they went to install the stove and they had made a mistake and there wasn't enough clearance for those options.  The only alternative stove which fit the clearance specs, was to jump up in quality, doubling the price.  Yikes -  however, it's super low emissions, has two air flow controllers and pumps heat like you wouldn't believe.   It's the stove I wish we had upstairs!   The downside is that when all was said and done, we could have practically paid for furnace for the same price.    The cats love to sleep in front of it and I'm happy it has a pedestal base as I have a friend who had a cat which got burnt from trying to bask in the heat under the stove.