Today I dyed with Yellow Bedstraw. It was about ready to flower, almost but not quite. I however need 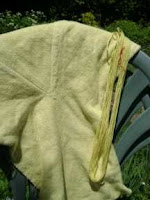 ed to dye something and wanted to make sure the yarn I have for Saturday's dye day at the Burlington Weaver's Guild was good. That's my excuse anyway :) I chopped down the Bedstraw 'cause it will grow back in a few weeks, tossed it in a pot and cooked it up. I also put a bouquet of fresh lilacs in the kitchen so there was a heady perfumy smell of the lilacs and the boiled Bedstraw which is rather like overcooked spinach.. yum.. When the dye pot looked ready, I tossed in a skein of alum mordanted wool and the hood I've been working on, both of which had been soaking for over an hour.
The skein took the dye really quickly and with a much deeper colour than the hood. The colour on the hood is quite even, though there are a few tiny spots which might have had not quite the dye take up as the rest of the hood. Odd because they aren't on folds or creases but on seam lines.

ng cards update - rawhide dog chews come in thin, flat "chips". I bought 3 packets as the rawhide bits are all of different thickness. While soaking, I cut out a pattern. I did hexagons and squares. After soaking, I traced out the pattern, cut them out and punched holes in them. I ended up only cutting out the squares because my sample hexagons required too much hole punching. The damp rawhide weaving tablets were placed between 2 pieces of lovely hardw

ood which is far too nice for a clamping jig and clamped together with gigantic C clamps, being as that is what I could find in the garage. I left them overnight, unclamped them and realized this morning that they weren't dry enough when I took them out. This morning, I resoaked the cards and they are in the clamping jig again. It will be several more days before I even peek this time :) Meanwhile, I will warp up the Oseberg tape loom using some cardboard tablet weaving cards, just to try it out.
Posted by Nina at Monday, May 25, 2009 1 comment:

It has been another busy few days. I did a program on Angl0-Scandinavian textiles at the Cambridge Weaver's and Spinner's Guild. They are a warm and friendly group of people who made me feel very welcome. They meet at a wonderful historical site, Westfield Heritage Village.

The garden is nearly planted. The blast of super warm weather the past few days has slowed things down a bit. The woad beds, 2 of them this year, are planted. The leeks on the other hand still need to be transplanted and I can't plant the beans until the wood edging gets put in the last 2 raised beds. That is a pie/work issue though, since my digger works for pie and I've slacked off on the pie making. Seems I'm the only one in the family that thinks you can actually have too much pie. 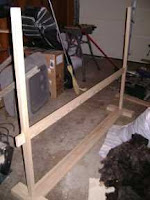 Yesterday hubby finished making a new tablet weaving loom for me. It's very pretty and made of Ash, so it's strong but light enough for me to move around without any problem. It just pegs and slots together, so it comes apart for transportation. The original is about 2 metres long. This one is a tad shorter than that for practical reasons, meaning my weaving areas at home won't accommodate a 2 metre long loom!

Now to make some proper weaving cards. I was offered the loan of some rawhide ones, but I'm hesitating on that. My dog is very fond of rawhide. Most of the time he is a perfect angel and doesn't get into things he shouldn't, but once in a while.... well, he got on the counter and ate 1/2 my son's birthday cake yesterday. At least it was before it was iced so I had time to make another. So should he get it in his mind to eat the rawhide tablets, I'd rather they were my own and not borrowed ones!

I've got a ton of seam finishing to do - a new linen gown in an amazing shade of green which is exactly the colour I got from weld with iron, a new linen cap and wimple. The cap and wimple will be dyed later this month when we do some linen dyeing experiments at Earendel Farm.

gotin dyeing frenzy. I tried to make this fat and spun woolen as opposed to worsted as I've been doing by default. I got the woolen part, but the fat - not so much. This skein is one bobbin and measured 339 yards when plied! It's soft and yummy though, so I'm not complaining. 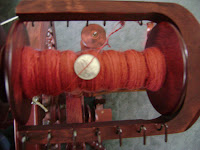 I'm spinning up the madder extract dyed wool. I'm combing it so I can spin a very fine, worsted yarn. It's very pretty, albeit still quite red. Yesterday I went outside with my combs to do some wool prep. Unfortunately the wind picked up and several little balls of combed rovings got caught in a breeze and have disappeared. Some squirrel is going to have a lovely lining for his or her nest!
Posted by Nina at Friday, May 22, 2009 3 comments:

The Importance of Sampling

Thank Goodness I've learned some patience in doing projects. The wool hood is sewn up. The lining is cut a 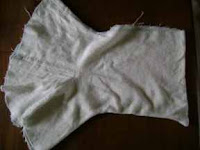 nd set aside. Now is the time to dye it. Sooooooo, I though that I might try some of the Earthhues Madder pigment that I picked up last summer. But I thought, perhaps I should sample first... novel idea but still... I mordanted a bunch of Shetland wool that was washed last fall and set aside.
I used about 200 grams of fibre and mordanted it with Alum at 10% WOG. I read instructions that suggested 10% WOG madder extract in order to get a nice, deep red. I really was going for a medium reddish colour, even lighter would be great, so I only used 5% madder extract to 100 grams of mordanted fibre.

EGAD! The sample, okay my sample is 100 grams, is bright cherry red! This was cooking it for just over an hour and the pot didn't even get up to 150°F. I've got a second 100 grams of fibre in there and it's alm 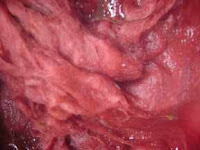 ost as brilliantly coloured. I'm so happy I sampled first as it's just not the colour that I wanted.
Why the brilliant red? Does the extraction process get rid of some of the yellows? I've no idea but it is very good to know. I'm amazed at the potency of the extract though. The only madder root I have ready is for a class I'm giving on May 30th and the roots I dug up are still at the farm, drying. The hood isn't going to be madder red but rather I think maybe I'll go for a green. I've got woad powder and yellow dye plants just about ready to harvest. I think that might be a safer bet.

I've noticed a bunch of winter kill in the garden. It looks like 3 lavender plants didn't make it which are easy to replace. Sadly the yellow tree peony didn't survive the winter either. It was a pretty plant, though the blooms were so heavy that sometimes they hid under the leaves. It will be much harder to replace as I've not seen anything other that run of the mill garden peony plants anywhere of late.
Posted by Nina at Monday, May 11, 2009 1 comment:

One of those weeks...

Sometimes you have weeks where you feel like you've been rushing around and busy as anything but have nothing really to show for it.
So this week I've helped a friend get a first draft done for a doublet pattern, I've made a pair of pants for hubby - well they're mainly done - I've tended woad seeds, weeded and revamped part of the garden, taken the dog for many walks, designed a first draft for a cloth doll pattern, drafted out some embroidery patterns for cuffs, wet finished and hard pressed the white wool fabric. W 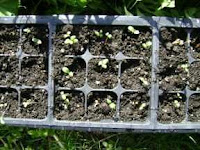 The woad seeds are growing. Considering that everything in the past few months was in total disarray, I'm so very happy to have them, even if they are slightly behind in the growing schedule. 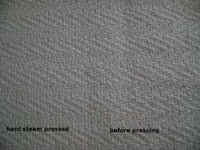 inches wide. It was nice after wet finishing but doing a hard steam press on the fabric made it so much nicer. The fabric is soft, drapes well and is going to turn into a hood! There is enough extra for the fabric for the doll costume for the above mentioned doll pattern. Hence the reason why I wove it white and will dye it in the garment. The scraps and leftovers will be dyed for the costume as well but in a couple of different colours.

The dye pots are still packed from the house selling adventure, in a box labelled in a very effective manner - dining room - 'cause that's where they were at the time they got packed.. sigh. I'm going to have to find them soon as I'm teaching a day long dye seminar in Burlington at the end of May!

I think it's time to write down a new todo list of projects. Sometimes too many start popping up at once and a list really does help put them into a realistic order. It also is very good for managing the finishing of projects and not just the starting of them.
Posted by Nina at Thursday, May 07, 2009 No comments: