Socks that weren't supposed to happen 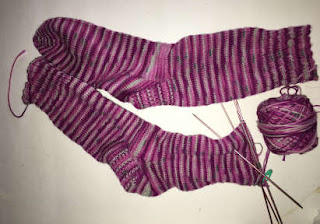 Pink socks are finished.   The first one seemed to take only a few days, but the second one lagged a bit.   Mainly because we did some maple syrup boils, and had a lot of time consuming stuff while I was knitting it.  It's Cascade Heritage Paints.   If I could have found their solid version of this yarn, I'd have been happier, but they only had the Paints colourways.  They're okay but it's the Cascade sock yarn which is the nice part.  It's easy to knit, fine enough and soft enough to make a comfortable sock, and reasonably priced.   The downside, is that it's difficult to find locally. 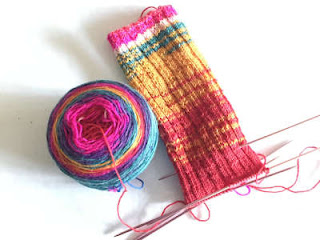 Those pink ones were going to be the last socks I'd planned on making for a while.  However, the weather has been miserable.  It's been cold, blustery and snowy.  Despite the snow not sticking to the ground, it's been fairly wintery out.  So on Friday night, I grabbed a skein of sock yarn, wound it into a cake and started kntting.   I didn't take a photo of the yarn in the skein, which was nice enough.  Once I wound it into a cake, it was really stunning.   The socks are kntting up as "interesting", but they are warm and fun.  I'm pretty sure the second sock will be almost impossible to match, so they'll just be different.   This is a Mary Maxim yarn, and it was on super sale.  It knits up nicely and quickly.  It's soft enough and definitely has some pretty colours.  While I didn't really need to knit up another pair of socks right now, the weather sort of demands it. 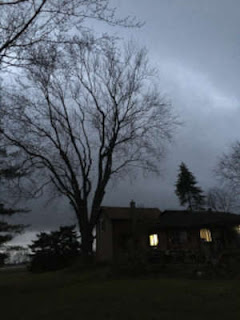 On Saturday, we had dark and gloomy skies.   Outside it really did seem like the description from a trashy mystery novel.  Hubby had to work and when he got home, he rushed in telling me he'd chased a hawk away.  It's not difficult to do.  The hawk sits on a hydro line and when they see us, they fly off.

I went out 5 minutes later, and the hawk was back.   He flew off and I started checking for my chooks.  Usually they run up to me when they see me, or I hear them murmelling in the shrubs.   However, it was silent.   I finally found 3 of them hiding in some shrubs near back and they let me escort them into the barn.   A while later I found another one behind the woodpile.  When she saw me she raced under the trailer and then behind the greenhouse and along the back treeline into the barn.    I couldn't find the other two for anything.   I kept checking until it was nearly dark, and finally found a 5th chook, who made it safely into the barn.    I was pretty sure we'd lost the 6th girl but didn't see a sign of her.  Of course I had been looking for live chickens.  The next morning, I unhappily found the 6th girl at the front of the property.    So we're down to 5 chooks now.  I've been keeping them inside right now, to make sure that the hawk and whatever other predator who feasted on the remains, don't think we're an open buffet for chicken dinners.

So knitting that bright and cheerful sock did make me feel  a little less sad too.

It's been a very "interesting" few weeks.   First, I inadvertently clicked the update to Windows 11 button, and over about 5 weeks or so, it slowly downloaded, on our very slow, rural wifi.   It changed all my settings, and mucked up all sorts of things. It took me several weeks to get it sort of back to normal.   Then it did an auto update, and now it turns off my wifi periodically and then the button to turn it back on disappears, creating havoc as I try to get it back.  Fun Times!

So, we have tapped our maple trees.   We had appropriate weather to put the spiles in and hang the buckets, but a 2 day windstorm put a kybosh on that.  We had to wait and of course the day after we got the sap buckets out, the weather turned cold again.   Finally it warmed up and the sap started running.   But it's too warm now, and the sap has stalled to almost nothing.   We're leaving the buckets up, hoping that it will restart.   Otherwise, we'll have a very small production of maple syrup this year.

The boss had to take a weeks holiday, as in he absolutely had to use it up, so he took off this week so he could get things done around here, and do a couple of sap boils.  He chose this week over next because of the longterm weather forecast, which changed for the worse about 2 seconds after he confirmed his choice of weeks.    He didn't get to boil sap at the beginning of the week because it's been too cold to run.   He was able to start yesterday, so he'll only get one boil done on his week off.

On Monday, the TV died.   I was in the middle of playing Animal Crossing and I left a villager's house and emerged into darkness.  A few minutes later of trying every sort of reboot and suggested fix, it was totally gone.    So hubby dragged up the old TV which was sitting in the basement.  It worked when it was put down there, but didn't work when it was hooked up this time.   So after I went grocery shopping, he headed out to replace it.

On Tuesday, my cute little car needed some routine work, an oil change, some brake work and a belt replacement because it was about time to do that.  It was over $800, which we were happy enough with.    On Wednesday, my son's car needed to go in so he borrowed my car to get to work, and called us up before he headed home to say the new belt was shredded.   That meant a call to the garage, who immediately sent a tow truck, offered to send a car to pick up my son and if necessary an offer for a loaner vehicle.   Then the next day they told us they'd made a mistake in installing it, and how they fixed it and the car came back to us.   We were so happy in how quickly and efficiently they dealt with the problem.  The cute little car is purring now.

So now it was Thursday.   We had to do two trips back and forth to pick up cars because we needed to make sure there was at least one car here that could do a long trip,  as the truck uses too much gas and it is making odd, unsettling noises that we don't feel safe doing long trips with.

Today we had to purchase a new electric stove!

It's not been much of a holiday week as it was just a tad too stressful.   We probably could have taken a nice vacation for what it cost us this week for just routine stuff, that always seems to happen at once.  There is a Fibre Festival in a nearby city that I was considering attending.   It would have been fun, but after all the expense and stress of the week, that just isn't happening.

Yes, and that rear windshield wiper  that we got an estimate on fixing, won't get fixed for a while as to fix it was another $850 as everything was a brand specific part.   How many thousands upon thousands of dollars would it cost to build a car from scratch, using stupidly over priced replacement parts from the dealer?

My son dragged out the cat tunnels we'd put away ages ago.   I think that the cats were less enthusiastic about them at the time, and we were tired of tripping over them.  So now we're tripping over them again, but one of our gingers was so happy to have this one out again, that he immediately ran in, played for a bit and then had a nap, inside the tunnel.  The two gingers love the tunnel right now.  They spend a good part of their waking hours running through and back and forth.   Today though, they were both waiting to ambush the other kitty.   However, there are 2 tunnels, and each cat was in a different tunnel.  That didn't work out at all and I just watched them trying not to laugh too loudly, because it was funny watching them check for the other.