The Rugs are ready for the Floor 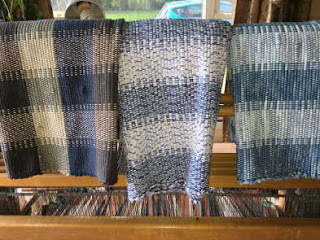 The rugs are done!  Yay!  I finished weaving the last one today.  I cut them off the loom and raced to the sewing machine.  I needed to secure the warp between each rug before cutting them apart.  I used a zig-zag stitch to secure the threads, making the stitch width a bit smaller than the default size.  This holds the stitches securely.  I could have done it twice, but all the threads seemed to be safely stitched down, so I didn't bother.

I don't like fringes on rugs.  They wear out quickly, dogs and cats like to do unnatural things to them, like chew or play with them, and they rarely look neat and tidy in my opinion.  Fringes are fast to tie, so that is a bonus.  However, I weave in 3-4 inches of tabby at the end of each rug and fold a hem on either end.  I fold the raw edge in, then fold again.  I use my sewing machine to stitch them down, rather than sewing my hand.  It's not only easier and faster, but I think it's more secure.  I want my rugs to be machine washable, pet safe and tidy looking.   Hems give me that.

All the rugs are 26 in wide.  The first one in the photo is 53 in. long, the second one is 51 in. long, and the third just squeaked in with an acceptable 41in long.  I used ever last scrap of fabric for that last rug.

Other than that, I've been doing a lot of spinning.  I've spun up some merino, a lot of BFL, 4 skeins of that rug yarn, and this orange superwash merino that I spun as a demo.   I was doing a spinning demo at a local fair and it was a lovely, albeit incredibly and unexpectedly warm day.   The fair is small, and definitely geared to families.  They had a huge homecraft display, including photos, school entries, agricultural items as well as preserves, baking, quilts and other crafts.  I even got to see a pig do the dog agility course, not very well, but it was hot and you could sort of see why he tried to go around the jumps rather than over them!  The craft display tent was full of extremely talented people.  The embroidery guild had some amazing pieces, including a little 3inch tall goldwork squirrel, which was perfectly executed.   I got to sit beside the rug hooking guild, who had the nicest people there.  It was a lot of fun.


I put a warp for 3 rugs on the loom.  Only 3 because the Fanny isn't a rug loom and that is all that I am comfortable with on the front beam.  It's a simple tabby warp in 2 colours.  The Sett is 12, using 4/8 cotton.

For rug number one, I used a cotton sheet which was white with blue stripes for the weft.   For rug number 2, I used a brown jersey sheet.  It was only a twin size and I wasn't sure I'd have enough, so I used a bit of leftover blue jersey sheet from a previous project and some very large tan t-shirts I'd purchased on sale.

I started rug number three this morning.  I'm using a  blue sheet, which has largish squares printed on it, with a mottled medium blue colour.
The squares on it are not noticeable when it's cut into strips, so that they are outlined in dark blue doesn't seem to really matter, with a specific pattern, unlike the blue and white stripes.

I simply sliced the white and blue striped sheet into pieces the width of the sheet, trimmed each end to a point, inserted each strip by hand and overlapped the trimmed ends to reduce blue.  The result is a fairly smooth rug surface.

The jersey sheet was also cut into strips, but I put a tiny slit into each end.  I threaded 2nd  piece through the tiny hole of strip one, and then fed the end of that strip 2, back into it's hole, tightening it to create a strong join for the 2 strips.   It leaves a small bump where the join is though.

For rug three, I sewed the sheet sides together to make a tube and have been cutting long, continuous strips which I've been folding in half before winding on a rug or rug shuttle.  There are a few little bumps where the sewn ends are, mainly because I didn't trim off the selvedges.

All three techniques make nice rugs.  I am not sure that one is any faster than another.  I do know that I really like weaving rugs with jersey though.  Jersey is t-shirt knit fabric.   After you cut it into strips, across the grain, you pull them to stretch them out.  The edges roll in on themselves, making a lovely non-stretch, round yarn.

A simple rug and jam - 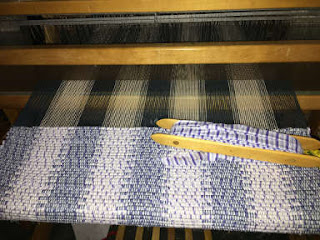 The loom is dressed and I've started weaving.  I've got it set up for 2 rugs.   I only put 2 on because I've found that with any more, I have to cut the first 2 off and then retie the warp.  It's not an awful chore, but I know that the last rug might take a while if I put on too many at a time.  I need to make a house warming gift, so letting a project languish at this time, is not a good thing.   I know with only 2 rugs, they will get done in a timely fashion.    I purchased 10 cones of 4/8 cotton, in natural a couple of years ago, meaning to make guitar straps.   I was going to dye all the colours I needed, only it turned out that a) dyeing all the string for the colours I needed turned out to be a lot more work than I wanted for this project and b) the 4/8 inkle woven straps were just a bit thinner than I expected.  While I knew they were strong enough, they bend and fold a bit more easily than I'd like.  I'm using one on my open back banjo and it's serviceable and pretty, but a bit fiddly sometimes.

Anyway, with all that natural 4/8, I had to dye the warp stripe.   It is a dark teal blue.    The blue warp shrank a bit in the dyeing process, which made for an interesting time dressing the loom.   The weft is a sheet that my daughter gave me when she cleaned out her closets.   It was a fitted sheet, so a little less fabric, but there are also 2 pillow cases, if I need them. I like the way the dark and light warp stripes are so effective when woven up.    I had been looking for a jersey sheet.   Jersey t-shirts and sheet make awesome rugs, but I didn't think I had enough of any one colour and I wasn't sure that weft stripes, along with the warp stripes would be effective in this case.

I made some seedless blackberry jam.  I had a whole set of photos to show the process and I was going to do a blog post on making it.   However I think I messed up when I transferred the photos to the computer and then since they were on my phone, I deleted them.   Yay me!

After heating up the blackberries, I ran them through a strainer to remove the seeds.   Blackberries have a lot of seeds and mine are semi feral, so pretty seedy in comparison to pulp for some of them at least.   I much prefer the seedless jam, which requires pushing them through a strainer of some kind.  I wish I had a food mill of some sort, but I don't, and I couldn't remember what I did the last time I made it.  I first tried a plastic colander, which let many of the seeds through, requiring me to re-strain the batch.  Then I tried a wire mesh strainer, which was too fine.   The next one I tried has a tiny hole in it, that got much bigger before I noticed it, requiring me to re-strain the whole batch to get all the seeds out, again.   Finally I got a strainer which worked adequately and it took a lot of effort, pushing the berries through.  The aim is to get the juice and the pulp through the strainer but not the seeds.   You don't want a clear jelly, but a jam, without the seeds which get caught in your teeth.

I addedd lemon juice and sugar.  I used pectin because I didn't want to spend a lot of time in front of the stove.  When it looked right, I popped it into hot jars, put new lids (always new lids) and finger tightened the rings down.  Then they go into the hot water bath canner for 10 minutes, once it starts to boil again.   I set a timer, so I have an audible reminder to take the jars out of the canner.   I lift them out of the water bath, and set the jars on the counter to cool.    I know every one who cans jars of anything, waits and listens for the pings that say the vaccuum seal is secure and all is good  with this batch.   They all pinged.   I opened a jar, as there wasn't any left for tasting, after the jars were filled.  It's good - not overly sweet and very blackberryish.   Yum..

I'm still finding spatters of blackberry pulp around the kitchen, in places it shouldn't be; the stove backsplash, counters, cupboard doors.  It was a messy but delicious job.    I've made apricot and blackberry jam.   I was trying to decide between plum or cherry for my final batch of the year.  Both of those rank very high for flavour.  I'd better decide soon as the blue plums won't be available for much longer.