Missing month of May 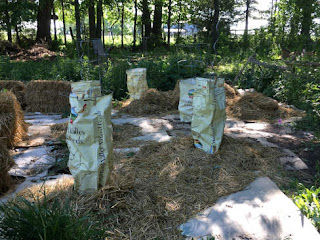 It's been a busy month.   The weather has been up and down.   We had a stretch of milder temperatures with no frost for several weeks.  I took the opportunity to get much of my garden in.   According to the Canada Natural Resources we are in hardiness zone 6a.    Our last frost date is supposed to be May 11 according to OMAFRA.   I lost two pepper plants last night because it got really cold and this evening I just covered all my tender plants and put feed sacks and straw around the tomatoes.    Sadly, I don't have enough sheets and covers for all the planters on the deck, so hopefully the patchy frost which is forecast for tonight, will not get to the deck.   There are two tomatoes at the back which don't have cages to support them yet, so they are just buried in the straw which I'm using as extra mulch over the cardboard. 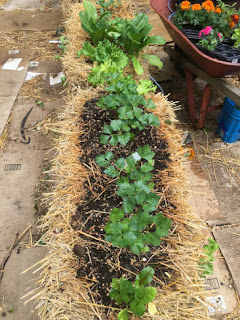 The straw bale garden experiment is doing quite well.   The lettuce has loved it so much that I've already harvested our first salad.    The cucumbers are doing okay and beans are already coming up.  Again though, the tender new leaves are being snipped off just as they come up.   I've had to put a ratty whirly gig, faded but still spins, and some hoops over the bean seedlings to hopefully keep whatever is eating them away.

I've seen some pretty spectacular photos and reports of straw bale gardening success, and an occasional report that it doesn't work.   I've heard of issues with bad straw, or people using hay and getting lots of weed growth.  Also, you really have to condition the bales to jump start the internal composting in order to actually have them sustain the plants.  It also requires keeping on top of watering.   Since I don't have a drip system for my bales, it means I have to go out and give them a bit of water once a day, or twice on really hot days.  It's totally not a no work garden this way.   But way less weeding, is what I'm finding.   I've been weeding the raised beds multiple times and it seems the weeds pop back the next day.  I've the Japanese Indigo bed covered, so my fingers are crossed that they'll be okay with tonight's weather.   I usually put them under cloches, but with the early May weather being mild, I didn't bother this year.    Next year for sure, as I won't risk it again. 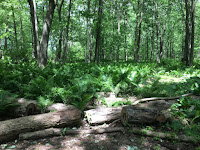 We've been walking the local trails.   Once thing I've noticed is that some of them look so different in the spring.   This trail was unbelievably different looking with the heavy hardwood tree canopy and lush fern covered forest floor.   It's a joy to traverse the trail while we still have few mosquitoes. 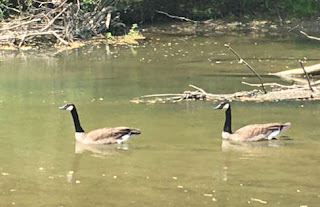 Canadian geese seen yesterday.   They are huge birds!   These didn't have babies with them, which I'd normally expect to see in the spring.   Still they were a joy to watch while they paddled along until they spread their wings and headed off with a lot of honking and fanfare.