New technology sometimes sucks -  just saying that if you get a new coil top stove, the safety burners don't allow you to keep something boiling easily.  It's a pretty stove,  but inefficient and causes emergency burner changes when trying to heat a canning kettle for heat processing yummy jam.

I have to make room in the freezer so I can shift the freezer contents of the fridge into said freezer next week, and then empty it enough to eventually defrost it.   I have gooseberries from last year and the year before that I've been wanting to use for jam.  I didn't really have enough  any one year because they are so tiny.    It turned out there was also an old packet, which was freezer burnt, so it went to the compost bin.

But I had over 1500 g of berries, maybe 1700g.   I sorted out the best 1000g and put them in a pot.  The best producing bush is very old.  It has hard green berries which never ripen because the birds get them first, or they get some sort of bug or blistering as they get softer.   So I harvest the tiny green berries unripe, top and tail them and if I'm not using them immediately, toss them in the freezer.   I have a newer bush, but it has just started bearing fruit.  It gave me about 15 lovely deep red berries last year, which I'd tossed in with last year's harvest.

I was using an 1832 recipe from Cooks Own Book, which is a delightful encyclopedia style cookery book.  It's easy to read and find recipes.   It calls for only half the weight of berries in sugar or a ratio of 1 part sugar to 2 parts gooseberries.   Other period recipes call for 3/4 lb of sugar to each 1lb of berries to as much as a 1:1 ratio of sugar to berries.  I opted for  using 750g of sugar to my 1kg of berries, because they were still pretty tart.

The because the berries were frozen, there were enough ice crystals to keep them from burning as they thawed and started to cook.   I turned the burner off after they started to thicken up.  Gooseberries have a lot of pectin in them, and I still hadn't added the sugar.   After the boiling stopped, I added the sugar in small amounts, stirring it in to dissolve between additions.  This helps keep the sugar from sticking and burning.   Then after we finally got the hot water bath to boil - we had to change a burner out on the new stove -   I brought the jam back up to a boil and boiled it until it started to thicken once again and a dollop on a cold plate showed it was done. 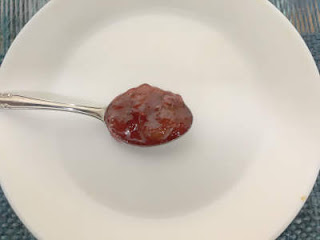 I put the jam into hot jars, added lids and tossed them in the canner.  Once the water came back to a boil, I let it boil for  10 minutes.  Out came these beautiful little jars of jam.   Gooseberries are indeed an old fashioned flavour, and it does take a lot of extra work to process the berries at first, but oh, it's lovely, lovely jam.   What is also nice is that those few red berries dissolved giving the jam a lovely red colour.

1/4 c water if berries are fresh or dry frozen.

Top and tail the gooseberries, removing the stem and flower ends from each berry.

Put in a large heavy bottomed pot with water if necessary and the lemon juice.    The lemon juice is a modern precaution to make sure the jam is acidic enough to prevent bacteria from growing or so I've been told.

Cook the berries up on medium heat, stirring periodically until the berries start to get soft.  Take the pot off the heat and when it is slightly cooled, add the sugar in several additions, stirring in between until the sugar is completely dissolved.

Put the jam back on the heat and bring to a boil.  Boil about 5-10 minutes, stirring constantly and scraping the bottom of the pot, so that the jam doesn't scorch.    Test the jam on a cold plate to see if it is of a jam-like consistency, holds it's shape when you run your finger through the dollop etc.   With a funnel, pour the jam (I use a stainless ladle) into prepared (clean and hot) jars.   Wipe the rims of the jars to remove any spills and traces of jam.  Put new lids and clean rings on the jars.    Put into a hot water bath canner which has reached boiling.   Bring the water back to a boil and then start timing.  10 minutes for 250 ml jars 15 minutes for 500 ml jars.   Remove jars and let them sit over night without moving them.  Any jars which don't seal properly, with an indent or the lid concave and secure, should be stored in the fridge and used within a few weeks.