I totally understand why some weavers like to work with thick threads.   I've been waffling for weeks about what project to put on the loom.  There are a number of projects which I've got planned, but I hadn't queued them up.   This meant that the couple of rather emotional things which happened this summer, got in the way of me actually choosing a first project.  Finally I grabbed the easiest project of the lot.   I had picked up some Bamboo Silk blends from the Spinrite outlet a while ago.. maybe last fall?  Yeah, it's been a while.  There were only a couple of packages of it, 6 balls in each package, but they only had a beige colour.  I grabbed a package anyway, despite my rather unispired view of the colour.   (They had 6 balls of Angora/Bamboo blend too which I snagged).    I thought I might get around to dyeing it, but didn't.   The yarn is much thicker than I normally use.  I like weaving with finer yarns and worried about the thickness.

When I just ignored my worries and worked out the details, I realized that I had about enough for 3 scarves, if I managed my sett properly.  The Fanny loom has a nice shed and I find that it tends to be far easier to do more picks per inch than I want.    My ancient Artisat is perpetually less picks per inch no matter what tension I have the warp or how hard I beat that darned thing.

In the end, I'm happy that I didn't dye the yarn.  The very neutral scarves mean they will go with anything and therefore suitable as gifts.  The bamboo silk blend is so soft that it's like weaving a hug.  Of course I've no idea how it will stand up to the wear of everyday use, not if it will even wet finish to something I'll like.   I really didn't have enough yarn to sample much.  I figured that at least I'm back weaving..
And the part about understanding why some weavers like to weave with thick yarns?  It took me a few minutes to wind the warp and a couple of hours more to thread the heddles, reed, wind on, balance the tension, wind the bobbins and start weaving.   My normal routine for tea towels, shawls and yardage often takes several days.

This afternoon I made a batch of Raspberry jam... the recipe was supposed to yield 8 cups.  I got only 5.5, but it's pretty awesome tasting raspberry jam.   I've more berries so will whip some more up later.   The jam really is that deep, dark ruby red colour!  It's beautiful.

I was out grabbing a few forgotten groceries and found myself staring at a bag of whole wheat bread flour.    After all, with fresh raspberry jam, one really does need fresh bread!   I peeked at it while rising.  It's got a little bit more to go before I punch it down and shape it into loaves.

The Best of Intentions

Mine that is!  I had intended that this weekend should be a fibre weekend.  I was going to do a sample rinsing of the solar dye vats.  I was going to wind a warp and at least start dressing the loom.   I was going to ply all the partial bobbins left over from the Stanley Cup spinning project.   I also wanted to redraft my husbands doublet pattern and get it started and had been musing about a new late period kirtle for myself.

Instead, on Saturday, we picked up a half bushel of green beans, a half bushel of peaches and a half bushel of plum tomatoes.  The beans went into the freezer that night.  Sunday morning I made peach jam.  I was pretty disappointed that most of the peaches were rotting from the inside out.  I got one batch of jam from the 1/2 bushel and that was only because I had 3 peaches ripe on the counter to add!   Then we popped out to do a bit of antiquing.  At one antique mall,  lots of small booths housed in a large building, I found a beautiful butter mould.   I rather like butter moulds.  It was a good price but I neither brought it with me while I looked nor remembered which booth I saw it in, so it didn't come home with me.   I usually look for antique weaving and spinning tools but there were none to be had that day.

On the way home, we stopped for canning jars and a jar lifter.   Normally I just freeze the tomatoes, either with or without their skins.  However, with the chooks in the freezer, the freezer is starting to fill.  Add to that the time it takes for frozen tomatoes to thaw, even in the saucepan, I decided to drag out the water bath canner.   Luckily I bought mainly 500 ml jars, since I'd forgotten how small the canner actually is.  The 1 lt. jars are too tall for it.   There was a pressure canner on sale, which I almost indulged in, but it's not really necessary for tomatoes, nor did I budget for it.   The half bushel of tomatoes gave me 20, 500 ml jars plus about 1.5 - 2 jars left, which I decided was not enough to bother keeping the canner boiling for another 45 minutes.  We'll eat them for dinner instead.

The one sunflower in my garden, planted by birds I'm sure, has a huge sagging head.  These two little extras brightened up the morning today!  Even better is that I saw a honey bee on it.  They've been far and few between this year, so if they are making a comeback, it's an awesome development.

Fibre activities are definitely in the works for this week though!
Posted by Nina at Monday, August 22, 2011 3 comments:

Socks and Breaking The Rules!

Since I started knitting socks, I've had a rule of only one pair on the needles at a time.  It's worked and I've finished my socks, totally avoiding second sock syndrome.. when you only ever knit the first sock of a pair and then start on another.

This holiday trip, I broke my rule.   I took yarn and an extra set of needles and started a new pair.  It seemed like the right thing to do at the time.  Camping, in a group, with friends.  Busy running around to classes, visiting, shopping and camp chores, I figured a mindless knitted sock - in this case a 3/1 ribbed sock, would be perfect.   Now the colourwork socks were on the needles and I'd finished the finickity counting the chart part, so the rest of plain knitting.  Why didn't I bring it along? 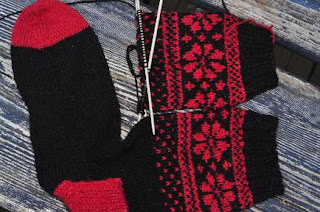 My gauge was off.  I knit the second sock in a totally different gauge.   There was a noticeable difference between the patterns on the first and second sock.  The bottom stripey bit on the second sock, started where the first one ended!  I was discontented to say the least.   At that point, I was ready to rip the thing out and start again, working to tighten up my knitting.   I'd be able to do what I had first intended as well, which was to knit the second sock as the reverse of the first.. so black pattern on a red sock.  I had totally forgotten to do so and was halfway through the pattern before I noticed it.  sigh..

When I got back home, the patterns had relaxed somewhat and are closer in size now.  The big question is, do I try to live with the difference or do I rip it out and start again?    (Not only that, but I just realized that I've knitted both socks with the pattern bottom to top, so it's upside down!  How in the world did I manage that one?) 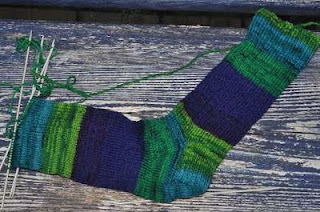 Anyway, I left the sock at home, so I wouldn't rip it out rashly.  It was a lot of work!  I grabbed two balls of sock yarn in jewel tones to use as a camping project.   The sock worked up quickly, although I need to rip it back a couple of rows and insert a few extra rows before I restart the toe.   I will have to say that while I love the colours, I'm not fond of the mismatched stripes of the colourway.   That huge purple blotch in between the thinner stripes just feels so totally wrong.   It would have been quite perfect if the purple stripe was the same size as the other colours.. just sayin...  I don't think I've another pair of socks that I consider quite so ugly, and this one isn't even a whole pair yet!

It's good to be home

I'm back from holidays. No matter how much fun I have when I'm away, it always feels good to come home.  I've got a ton of laundry to do.  I should have done it today, but they were calling for rain.   I'm sure it rained someplace, but not actually here.    There are bins of camping gear to tidy up and put away.  I can't believe that I took my camera, but didn't drag it out, even once.   It seemed out of place to haul a camera bag and a dslr around at a medieval reenactment!  I brought my spinning wheel and even got to spend an afternoon spinning.  I'm not sure I spun enough though, to actually warrant the space it took in the truck.  I'll rethink bringing it along next year.

All in all, it was a good holiday though.  I had fun, spent time with friends, learned some new things, and learned a few things about myself in the process. 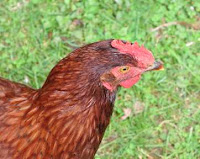 I came home to find that the boys were fine, the chooks were happy and the Rhode Island Red crosses had bright red combs, which they didn't have before I left.   This means that we should be getting more eggs in a few weeks.

Garden Update ...
The garden is rather overgrown with weeds.  I don't think there is enough time this year left to put it back to rights though.   The Kolrabi is ready to harvest, but something has eaten all the leaves. The bulbs are tender and delicious though.   The lush patch of beets I had before I went away, is almost gone.  Nobody here has eaten them, so some animal has had a good meal or two.

The volunteer sunflower, is very pretty.  It's growing in the middle of the peppers, so looks totally out of place.  The peppers are giving the best harvest we've ever had.
The first tomatoes have been harvested.  We'll not get enough to freeze or can, but there should be eating tomatoes.

There won't be any pumpkins to harvest this year.   The plants have finally started growing, but there are only male flowers.  On the other hand, there are a few Kabocha squash, a new variety for me and of all things, there are watermelons growing.   There are two which are the size of large grapefruits and several more smaller ones!  I shall be watching them grow with great anticipation.  I've tried to grow watermelons several times before but never before actually had anything to harvest!

There are garden Phlox growing.  In the totally wrong place, they'll need to be moved next year, if I remember. 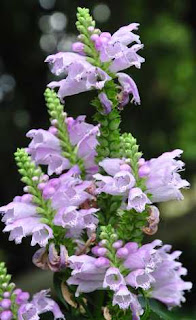 This plant has small flowers which look similar to Foxglove, with both the colour and the spots inside the flower cones.  They aren't nearly as large though.  I've no idea what it is, but it's pretty enough.  There are a few other flowers blooming as well.  One black hollyhock, which decided to bloom the first year. It's a bit of a sad looking plant as well, which may need staking next year.   Not enough to dye with though, with only a few blossoms on it.