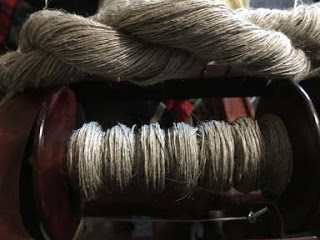 More flax has been spun and more is being spun.   I'm still spinning it as singles.  It's still enjoyable spinning.  I'm almost done another 100g bag of long flax.   It's going fairly quickly, but as I'm wet spinning it, I need to take breaks to let my fingers dry out or they get all wrinkly and uncomfortable.     I checked my container of hand spun linen skeins and I'm pretty sure I have enough to weave something.  I just need to decide what to weave. 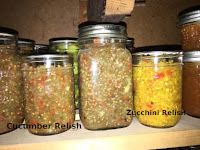 A friend called up and asked if I wanted her excess garden produce as they were heading out on holidays, and didn't want to leave the veggies to grow too large to use.    I ended up with a ton of cucumbers, zucchini and some beans.

First, I found apricots at the market, so ended up making an 1832 jam recipe for Apricot Marmalade.  It's very yummy.  Then I made cucumber relish.   I'm still trying to decide whether to make a second batch or not.   It's a bit time consuming though. 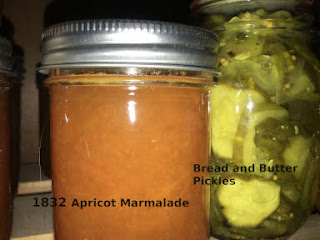 After the cucumber relish, I made bread and butter pickles and finally zucchini relish.  We should be set for a while.

I totally can't believe that almost a month has passed since my last post.    I've been busy but still feel like I haven't accomplished much.   As well, we've had a lot of rainy and stormy weather which tends to knock our wifi connection out until the weather clears again, making blog updates difficult.    The weather has been really odd.  Flowers are blooming early and our trees look like they do at the end of the summer.

The garden has been a partial success.   The green beans and salad greens have loved the straw bales.   I've had issues getting cucumbers, zucchini, radishes, beets and carrots started, not because of the bales, but because something was eating all the young plants down the night after they sprouted.   Next year I'll have to work out some way to protect all the seedlings; maybe cloches pinned down or something. 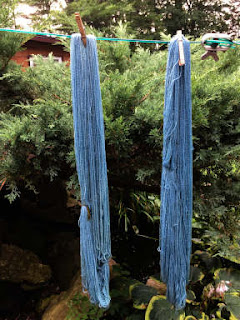 After an extra week of delays due to backorders, the new dishwasher has arrived.   It also arrived while my sweetie was working from home, so while I had an afternoon with the hookers (rug hookers) in the park, he installed it on his break.   He told me that there was an issue with it though as it was so quiet that he couldn't tell if it was running!

I did some spinning.  I finished up the superwash merino.    Then  I did a sample dye vat of Japanese Indigo, to  see what sort of colour it had.  Just a bit early maybe, and I was using up old Thiox, so it was a bit of an iffy experiment.    But there was colour, lots of colour.

I dyed 2 skeins of the superwash merino.   It is a lovely soft blue.  I'm happy with this colour.   My indigo vat wasn't fully reduced.   I'm thinking it was the old Thiox, but it could have been that I jumped the gun a bit on timing as well, so it may not have had the extra time needed to be fully useable.   Still, it's the sort of blue one would expect from a woad or indigo vat, so yay for that. 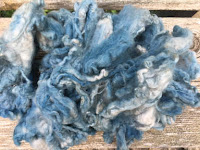 Then I shoved a handful of merino/cashmere/silk in the vat to see how much dye was left.  The photo is actually a bit lighter blue that in reality.   It's super soft of course, but the colour is lovely.   After this came out of the vat, there was more colour, however after a late start, the light was fading, so I ended it there. 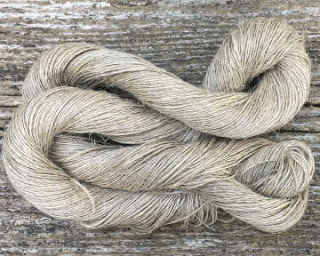 A day trip to the Fibre Garden , my favourite spinning supply store was my birthday present.   I got some extra heddles for the 8 shaft table loom and some lovely Finn sliver.   Best though, was some long line flax.    Flax strick is really difficult to find here, but sometimes the shop has some long flax sliver.  It's processed, but with 12 inch lengths of flax.  It's super slick to spin and really it feels like it spins itself.

I absolutely love spinning this stuff.   It feels like flax. It spins somewhat close to spinning strick spins like.  And it smells like flax.    This skein is 76g of long line flax sliver.   There were 3 packets in the shop.  I came home with all 3 of them.