It has been a very odd few weeks.   Weatherwise, we've had nothing but variable weather.  From the ridiculously mild, to cold and blustery, with rain, snow and winds inbetween.   What we've had little of is sunshine.   Day after day of grey weather.   Just so difficult to get motivated when it's getting dark at 4:30 pm and isn't light until after 7 am.   Then the wind storms, wifi outages and power failures just topped it off.   On the plus side, I did finally force myself to figure out how to use my phone to make a hot spot for my computer.  It wasn't difficult.  I just hadn't really been in a situation where I needed to do it. 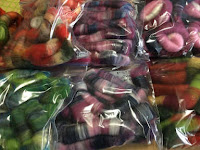 In between, I did some fibre blending.  I made up a bunch of packets of rolags from some bits and pieces of fibre that needed to be used up.   These are merino, corriedale, silk, with a bit of angelina or sparkle, which is a local shops nylon, sparkly stuff, similar to firestar. I didn't use a lot of sparkly stuff, just a tad to make it interesting. 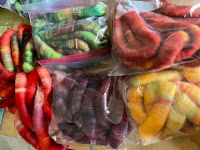 Then I blended up some rolags for a new hooked rug.  I didn't want to go out and buy wool yardage for this rug.  It's not an original design and is a guild challenge project.   The photo to the right shows the start of the rug yarn project.   I had to do a bit of concentrating for the first few yards to make sure that I had the grist suitable.   I need a bulky yarn for this project.  It's better if it's a bit uneven in grist (sigh, not my favourite) and has a nice mix of colours.   It spun up quickly because I used a long draw and forced myself to not pay a lot of attention while spinning   It worked though, I got the results I was looking for.

I swapped a couple of bags of the first rolags, for a similar amount of roving from a friend.   One bag was a super dark blue shetland/blue faced leicester crossbred fibre and the other was undyed shetland/bfl, and alpaca.    I wasn't too thrilled with the shetland/bfl cross.   From what I could tell, it didn't result in a better fibre.   BFL is long, and quite soft.   This was more shetland-like, in that had a medium crimp, wasn't quite as long, nor as soft.   However, I blended the two fibres together, hand-carded it into rolags and spun it up into a 2 ply worsted.   It's nice enough, mainly I think because it's 25% alpaca.    It's about to become mittens.  No photo right now because it's too dark for a decent photo right now. 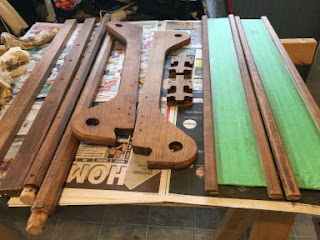 Because of the rather scary rise in Covid numbers, my whole family opted to have a stay at home Christmas again.    In the end, I was okay with that, although I missed my kids, I'd just gotten my booster shot, and spent half of Christmas day sleeping!    I did manage to sand all these pieces of a rigid heddle loom though.

Today, hubby set up a work station in the mud room and I taped up the rigid heddles and stained it all.   Tomorrow, I can put the first coat of finish on it.   Luckily, I still have enough tung oil on hand to put two coats on, which will hopefully be enough.  I can't get more, because I just found out that it was discontinued.  It's the finish I used for my spinning wheels.  I haven't needed to buy any in a while, which is a good thing since it was discontinued in 2010!

I realized that lots of people use rigid heddle looms as a starting point to jump into weaving.  However, I figured that as more than a couple of people have asked me about them, I should learn how to use them.  Also, on days when arthritis means it hurts to weave on the floor loom, table looms work just fine.  They are fast to dress and weave off too, so good for demos!   32in gives a lot of leeway for project possiblities. 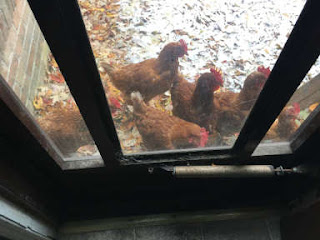 There were still some not snowy parts on the lawn, so I let the chooks out that day.   They are pretty wimpy and don't like to wander out of the barn when it snows.   The wild birds had picked through the food in the feeders and scattered a lot on the ground, so the girls headed out to clean it up.   I had leftovers for them too that day.   Later in the afternoon, I heard some insistent knocking at the back door.   This is what I saw!   They either wanted in or wanted me to go out, prolly with treats for them.  There were a couple of the chooks, pecking away at the door.  The rest were just in cahoots!