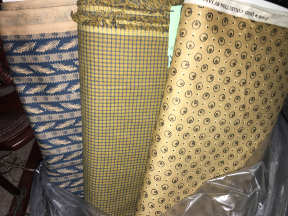 We don't have a fabric store in town.   They moved away a few years ago.  Instead we now have a Len's Mill store which has a huge fabric department with mostly huge prices as well.  However, they have a fairly large clearance section, with reduced prices, which go on sale a couple of times a year.

They used to carry 19th c reproduction prints.    While I haven't seen them for ages in the new fabric section, there are several bolts left in the clearance fabrics.  So for this sale I got a dress length of the brown dots for an 1860's dress, a dress length of a non-period but very homespun looking yellow and blue check for an 1830's dress, and the blue, which is hopefully a match for a previous purchase which for some reason I didn't get quite enough yardage. 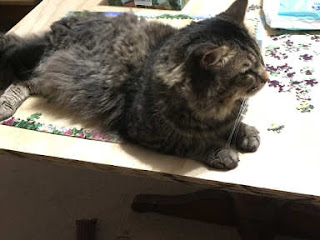 What is it about cats and puzzles?  Here is Kevin doing his snoopervisory best to "help" with our traditional Christmas puzzle.   At one point there were 3 cats checking it out, although the old kitty was right under the terrifying and terrorizing ceiling fan, which he spent his entire time staring at before he couldn't take it anymore and bolted.  We can't run a ceiling fan during daylight hours because he panics so much when he sees them. 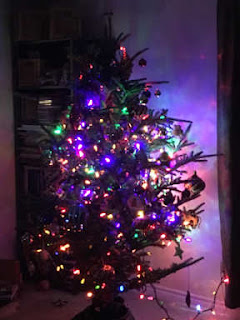 We were amazed our tree was upright throughout the holiday period.  We did come home a couple of times to find it tilted precariously and a scattering of ornaments all over the floor, but it never actually got tipped over this year.  I still won't put any of the "good" or vintage ornaments up.  This year our tree was really fresh, but had large spaces in it.  I had to get some of those huge ornaments to fill the spaces.  It looked lovely though.   Just to add that apparently those ginormous ornaments are call Christmas Onions!

I've been playing with 19th c hat patterns.   I was loaned one for use, and the one pattern must have assumed everyone was a bobble head, it was so large.   I've been playing with resizing and a bit of reshaping since the brim angle seems a bit too deep on the original.   I'm almost ready to make a mock up.  Yay! 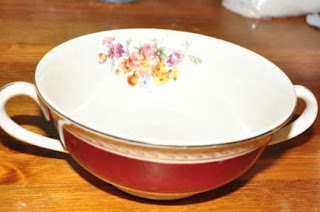 A couple of years ago we had a costumed Victorian dinner with friends.   Margaret is an amazing cook and she served soup in lovely little two handled cups.   They were charming and elegant to use.   I've been hunting for some ever since.   The ones I've found were either part of a large and expensive set or rediculously priced.  Mainly though, they were just not easily found at all.   Until the other day when I popped into the thrift store.  There were 4 of these bowls, which were priced at 4 for $5.  I couldn't let them not come home with me for that price. 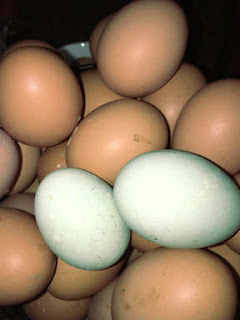 Oddly enough, the local feed store was taking orders for ready to lay hens at the end of the summer.    I found out because I was asking if he could get in some heritage breeds or cross breeds from the big hatchery.    It's odd because it is the wrong time to get chooks.  Their laying habits are linked to daylight hours and with us getting so few in the autumn, it can mess up the laying cycles.   So he was ordering red sex links - which are fine, but he knew a guy who raises purebreds and sometimes has chicks for sale.   As long as they weren't Plymouth Barred Rocks - (my experience with them is that they are a bit mean and aggressive), I would take two of whatever breed he could get.  It turned out that he had Americauna chicks which would be ready to go about the same time as the regular hens would get in.   Americaunas are an American bred bird, which is like the Aracana but hardier, with less problems.  They lay blue and green eggs.  They were obviously younger than the sex links.  I knew that they might not start laying until the springtime because they weren't the super laying hybrids.   I chose a black and a grey, both pretty birds.   The black grew up to be an incredibly handsome rooster which the breeder traded me for another hen this week.  And ta-da!   I've gotten the first coloured eggs from them.  They are so cute. 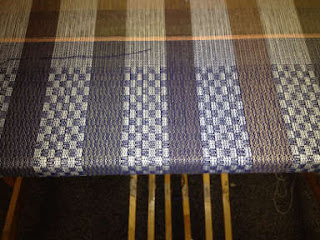 It turned out that I did have a photo of the blue tea towel I wove at the guild studio.   What happened is that my phone was acting wonky and it didn't show up for some reason.    After a few more issues, which made it difficult to actually contact anyone, my sweetie insisted I replace it.  When I looked through the newly transferred photos, there it was.     The neutral warp makes all of the towels a little dull but it also meant we could use virtually any colour with the warp and it would look decent.

My favourite banjo strings are discontinued.  Because I can't find a way to contact the company, I don't know if they are no longer being made or just not being ordered by the local music store chain.  Our local store thinks they have found a couple more packets in various stores across the country.  I hope so.   Dean Markley Lights - 9's are very light, easy to pick, sound lovely and bright.    I've been trying other strings but they are either too heavy or made of a different metal which I just don't like at all.   I'm a bit sad about not finding them anymore.