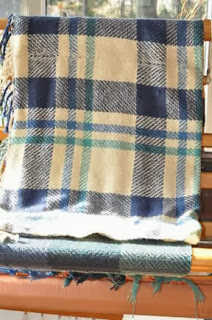 Blanket 1 is off the loom.  Because my loom is only 36 inches wide,  I had to piece it.  I'm slightly off on the one blue block, but the rest are fine.  Leave it to me to do a checky or plaid pattern for my first big weaving project in a while, that had to be pieced at any rate.
It took a while to twist those fringes.  Even with my handy little fringe twisting device, my fingers were a little roughed up from it but I guess it's an occupational hazard for fringed items.   I have to admit that fringes on a throw type blanket make it look nice.  I don't really like them for practicality though.  When you pull a fringed blanket up to your chin, the fringes get in the way and tickle your nose!

I tossed it in the washer with cold water and agitated it on and off for a few minutes, checking every minute until it was perfect.  It took just a couple of minutes for the yarn to get clean, fuzz up, soften and fill in the weave structure.   It's soft, drapey and yummy.   If it hadn't been slated for a gift, I'd keep it myself. 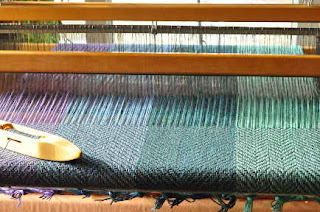 Same with blanket number 2 which is on the loom right now.  I love the wide bands of colours.  The weft is a dark grey.  If I had a lighter grey, it would have been my preference, but the dark grey does look really nice.  I'd forgotten that I'd switched the direction of the twill every colour change for the plaid, so the pattern on the wide stripes is interesting.  It doesn't detract from the look though, so I'm going to leave it.  I don't want to have to re-thread the heddles unless I get an virulent attack of inspiration.

This blanket won't have fringes.  I'll just hem the ends for a clean and useful finish.  That change brought up a major problem with my math.  I forgot to remove the amount I'd allotted for fringes and when I subtracted the excess loom waste, I manged to wind on a longer warp than for the checky blanket.  I'm thinking I might have enough extra (about 3/4 yard or maybe more) to have a couple of matching pillows or a bag of some sort.  What was I thinking?

I'm not that fond of tying on warps but I'll have to admit that it's really fast and effective for multiples in large projects.  I wouldn't be comfortable about winding on more than one of these blankets at a time because they are pretty bulky and I'd worry about keeping my tension even with that much on the loom.   Since the piecing of the two halves, the fringe twisting and all the other finishing bits and pieces takes as long as it does to weave off the fabric, not having to re-thread heddles and re-sley the reed speeds up the process immensely. 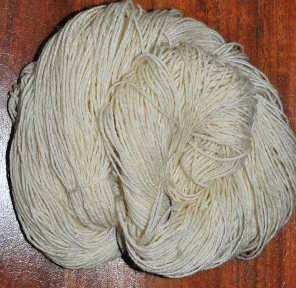 I started spinning this Blue Faced Leicester sock yarn a while ago.  It was my "fun" project while starting my level 4 homework. I was spinning it on the Mazurka at spinning nights and demos.  However I suddenly had a need to free up bobbins.  This is a 3 ply, so I needed 3 bobbins plus one to ply to.  As of the last spinning night, I was on the 3rd bobbin so it was time to hurry the project along.  I spent the weekend spinning up the rest of the roving and found time to ply it last night.

It's superwash and has some added nylon for strength.  It's 3 ply worsted and there are unfortunately only 275 yards of it, so I'll have to spin up a bit more for security.  I like my socks with longer cuffs.   I'd weighed and divided the rovings into equal portions before spinning.  It worked a treat as I had only 1 yard left on the second bobbin and only 3 leftover on the 3rd bobbin after plying.  Sometimes my scales are a little off and it doesn't work quite so well at making equal amounts of string on each bobbin with little waste. 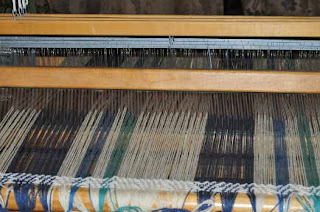 I've got a new project on the loom - finally.  This is wool and was quite to wind the warp thanks to finally finding a place to mount my warping board on an unused wall.  A bunch of us have used this yarn in our guild so I was able to query a friend as to the correct sett.  However I'm going to resley and rethread the heddles.  I have a stupid 4 thread float which I don't like.  It's my own fault for not bothering with a draw down, as I usually do.   However this is a blanket and a float that long will just catch and be a nuisance. 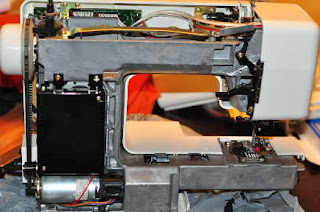 My back up sewing machine has been making an awful squealing noise.  The last time I took it in to be serviced, the guy didn't even bother to look at it.  It had the same lint and the same problems that I'd asked to be fixed so I'm a little leary about some of the repair people out there.  Being so far out of warranty, I opened it up and found this huge wad of lint hidden on one of the gears.  I got it back together but it's still making noise.  It's coming from the gear/belt area though.  I am pretty sure I can change the belts but I'm not sure about changing the gear if that's what it needs. 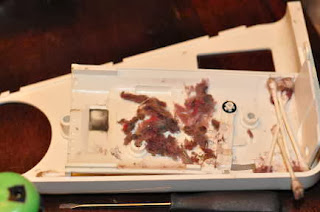 This old girl makes pretty decent button holes with a minimum of set up and fuss so I hope I can keep her going.  My other machines makes great stitches, but takes so much fussing to make a button hole that even a great button hole is not worth the effort when compared to the back up. 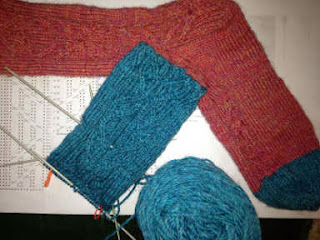 It's starting to feel like I'm making progress on this year's Fall socks.  For some reason I always find that if I actually spend a few minutes here and there actually knitting the socks, they get finished much more quickly than if they sit there in the project bag, ignored.   I love the pink and decided to do the toe in the opposite colour, just to tie the two together.  The blue one will have a pink toe.  Then they will definitely be a pair and not two lost socks finding their way together. 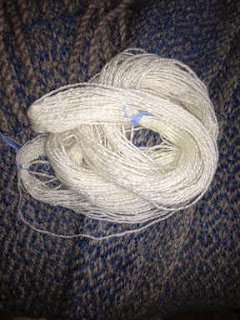 I've respun the cashmere.  I'll have to admit that the results are a bit better this time and I've kept it high enough that Kevin can't get to it.  I still have to wind the sample skeins required for homework and do all the calculations and measurements for the tags.  That's really the part I dislike the most.  I think it takes as much time do the math for count, % blends and even just filling out the darned labels with all the identifying info, like tpi, wpi, fibre, how it was prepped and spun, and what I would actually make with this yarn. 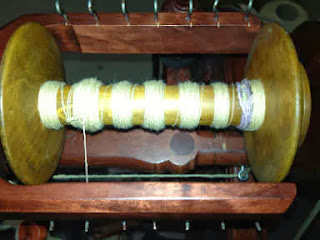 On to Cotton.  I have always thought that I didn't like spinning cotton.  However all of a sudden, with this exercise, it seems that I don't mind it all that much.   I guess it's just practice coming together making it easier to spin it more efficiently and consistently, not that it's perfect by any means.

Projects on the go - the loom is about to be dressed with a couple of projects, blankets and scarves I think...
I'm also about to start on a new coat for wearing at the bake oven.  The costume department calls it a Sacque coat, but online info suggests that Paletot might be another name for it.  Regardless of the name, I have a nice bit of wool, which is really a tad too lightweight for a coat, but it's in the stash so I don't have to  purchase new yardage for the project.  It will make a nice coat if I line it properly.  It will be perfect for wearing at the bake oven in December.  Last winter I found wearing a cape just too awkward to be actually working in.  Sleeves will make a huge difference in being able to work and keep warm!
Posted by Nina at Monday, November 11, 2013 2 comments:

The Cat ate the Cashmere!

It was a grey, cold, wet and windy day.  I had finally started my level 4 homework.  I spent the summer playing around with trying to spin Lopi type singles, practicing with cotton on both a takhli and the wheel and then pretending that I like to spin novelty yarns.

Finally, I felt energetic enough to start my homework.  After the fiasco of the 3 ply spiral attempt, I set to spinning Cashmere.  My first assignment was 100% cashmere, which turned out nicely, despite my not really liking it much.  It's soft, fluffy and lovely, but not something I'd really use much of as it's way too expensive to use for weaving,  too expensive to make into mittens for the  wool sensitive menfolk around here and too frou frou for anything I'd use such a fine yarn for.  However I washed it up and it turned out even better than I expected.  I set it to dry.

Then Kevin decided he wanted to go outside.  He's still not putting weight on his hurt leg, despite the passing months, so he's not allowed outside yet.   Then he wanted to sit by the screen door to gawk outside, but it was, as above, cold, wet and windy; not a day conducive to leaving a drafty screen door as the only protection against the elements.  I shooed him away and shut the door.  Then Kevin wanted to play in the Icelandic fleece I was sorting and prepping to wash.  I had to pick him up and move him away.  Finally, he grabbed the prepared packets of sorted wool locks that I was ready to wash.  He started wrestling and rolling around with them.  I took them away and started to wash them.   Kevin wandered off sulking.  In a few minutes he came back, rubbed up against my legs and went off to take his morning nap.

When I went to set the packets of wool locks to dry, this is what I found.  The darned cat chewed up my 100% Cashmere yarn.   Don't tell me they don't have some sort of miserable thought processes which seek revenge or try to make a point.   I'm going to have to spin a whole new 100% cashmere skein.  I hope I have enough fibre left.

I mixed up two blends with the Cashmere, one Merino and the other Polwarth.  The Merino turned out to be too long to really work as I'd hoped.  However today, I finished plying the Polwarth/ Cashmere blend, which I love.   It's soft, bouncy and yummy.  I've way more than I need for a sample, but not enough to really do anything with.   I'm keeping the details on how I spun it so that once I'm done with the rest of my Cashmere homework and have a bit of time, I might be able to spend a bit of time spinning up more.  It would make an awesome shawl.