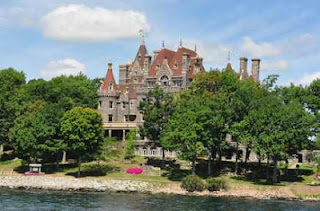 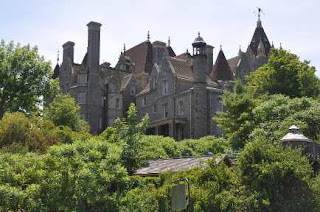 One of the day trips we took was a cruise to Heart Island, to visit Boldt Castle.  This was built as a hunting lodge, or rather I'm guessing as holiday home, for the Boldt family.  The Castle has 120 rooms,  in 6 stories, fancy gardens, it's own power generation building, a dove-cote and even a playhouse.  In 1904, the lady of the household died unexpectedly and all building was stopped, leaving it unfinished and never used.   It's being restored to what would have been it's former glory if it had been finished.   I didn't take photos of the inside as there were just too many people around.  Only a portion of the castle has been restored, but much of the rest was open to the public.  You could see many of the original materials.  As well, there were copies of the original plans, so they know what it was supposed to look like. 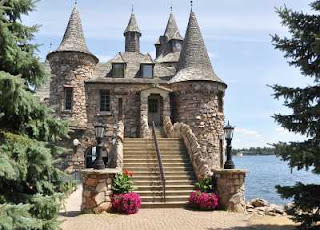 This lovely building was the power house.  It originally held generators to supply the castle with electricity.   We were able to go through the lower level which houses an interesting photo display of the Boldt family and other historical events of the buildings on Heart, including fire and the ravages of time.

The Alster Tower was the playhouse.  It was supposed to house a billiard room, a dance hall, library, bedrooms, kitchen and even a bowling alley.   It's currently undergoing extensive renovations so we weren't able to visit it. 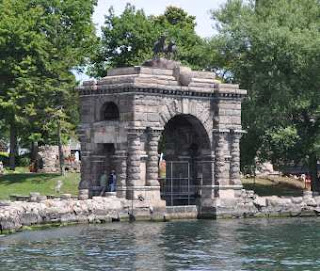 The official entry location of Heart Island was this archway.   It was to allow yachts to anchor outside and people would be brought in through the archway.  It was supposed to have a drawbridge and covered walkways on either side.  Plans had it leading to a swan pond. 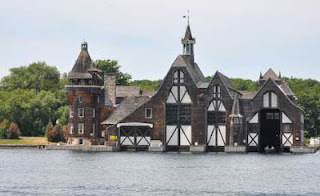 The yacht house is on Wellesley Island.  It's been restored as well.  However with only a 2 hour stopover, we chose not to take the shuttle boat over to visit it.  There was enough to see as it was. 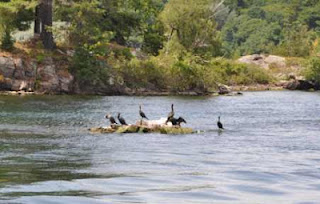 It took about an hour and a half to get there and the same amount of time back, following different routes, so there was a lot of changing and new scenery each way.    There are a lot of raised nests with imposing Osprey sitting on them, survey their domains.   On smaller rocks and islands, there were many Cormorants in small groups.  They seemed a much more playful bird than the Osprey.

There was so much to see and so many renovations still happening that we'd love to go back in a couple of years to see how it's progressed.
Posted by Nina at Tuesday, July 31, 2012 No comments: 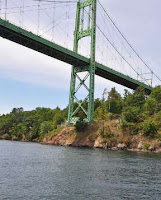 Last week, we traveled to the 1000 Islands area for a few days of relaxation.   We went camping and found a lovely spot right on the edge of the St. Lawrence River.  Our campsite was just to the left of this huge bridge which leads to Hill Island.    We noticed a bit of road traffic on the bridge the first night, but after that it wasn't a problem.    We packed our large nylon, modern tent, which was large enough for our queen sized air mattress, a small portable table and two chairs. 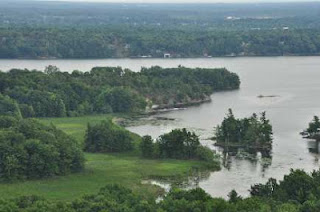 Right across the river, on Hill Island was the Sky Deck attraction, which my sweetie decided spontaneously that we should visit our first evening.   It wasn't in our original plans and we'd not even known about until we figured out what it was, right across the river from the campsite.   It's about 130 m tall and had some stunning views once you got to the top.  They have a fast elevator to the first observation deck and you have to walk up to the next two. 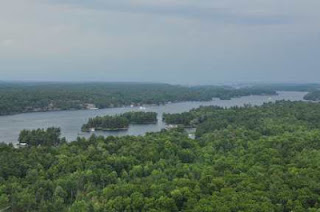 Despite the clouds coming through and the fast, fading light, the views from up high were incredible.  It was a great way to really see what the area was like.  From the ground, you don't really see the islands or have an immediate idea of the immense size of the St. Lawrence River. 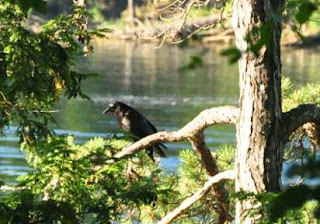 Every morning, this fellow woke us up.   He or she cawed and screamed as the sun was coming up, conversing with what sounded to be a much younger and much whinier crow!  It was the most effective alarm clock I've had in a while. 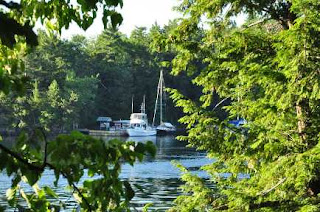 This was one of the views from our waterfront campsite.  It was so pretty, that in the evenings, before it got too dark and the mosquitoes too became to active, we just sat at the water's edge and watch the waves and the boats.   As the sun started to set, we'd retreat into our tent, to play Scrabble by the light of a not quite bright enough LED lantern.   Regardless of the bridge and the morning wake up calls,  it was peaceful and calming.  We took a couple of day trips while we were there.  More about those later as they were a bit photo heavy adventures.

The Elecampane is blooming.  It looks like a rather oversized Dandelion, although paired with the Black Hollyhock it's growing beside, it's a pretty combo.  This plant is huge.  The seed catalog description suggested it would grow about 4 feet tall.  This baby is as tall or taller than I am when I'm standing on the deck, so someplace in the 7 plus feet range.  Amazing.   I'm leaving it growing for this year.  With the winters perennial flower losses - both Echinaceas, the Cardinal Lobelia, Coreopsis, all the Icelandic Poppies and more, at least this is some colour in the garden beds.

The 30 quilt blocks are pieced and pressed, ready to be cut in 4 quarters, rearranged and reassembled into thirty new blocks, which will be then sewn into a quilt.  I already have border fabric, which I hope will work suitably and frame the quilt.  It looked good with the uncut fabric, but sometimes the blocks seem to look differently when all put together.

My first attempt at a bouclé yarn.  I cannot believe how much time this took.  Of course I over estimated the amount of fibre I'd need in the first place, so the amount of the base single was more than expected.  Then I had to spin more of the mohair as wrapping was supposed to take at least 1.5 times the base.  Then I had to ply the two together and then ply a third time with a binder thread.  I used sewing thread.   All in all, I'm pretty happy with my first try.  It's a balanced and nice looking skein although I think I could have done with a little less enthusiasm with the wrapping of the mohair ply.  It's got an awful lot of loops!  This was the result 3 days of spinning for several hours each day.

I also played around with spinning thick yarn.  I got thick and uneven yarn, thick, dense and mainly even yarn, and finally I got a fairly even, fairly light, sproingy, fluffy yarn that I am happy with.  Who knew spinning thick yarn was so difficult?  I cannot for the life of me think what I would use this for, but it's good to know that I can indeed spin a variety of thicknesses. 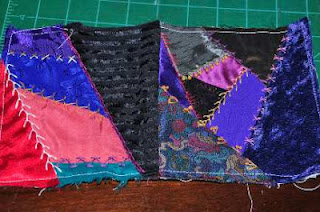 Take one piece of lightweight, unbleached cotton twill.  Stitch down a bunch of scraps of fancy fabrics, silks, velvets, brocades, etc.  Take a few moments to do a variety of embroidery stitches on the seams. 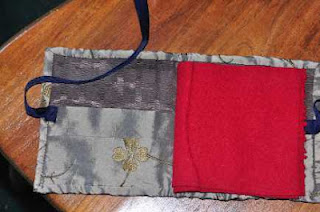 Trim the edges square, add a lining, two folded strips for pockets and bind the edges.  Find a piece of scrap wool fabric, fulled or a piece of felt would work well here.  I just didn't have any.  Cut two pieces just shy of the full measurements of the piece.  Stitch the wool pieces down the middle, from just under the binding, to just before the binding.  I back-stitched twice on each end for security because I was too lazy to pull the thread ups to one side and knot them.  I used a black thread for the bobbin as it lined up with the black patch on the front and red thread for the top thread in the machine, to match the wool pieces. 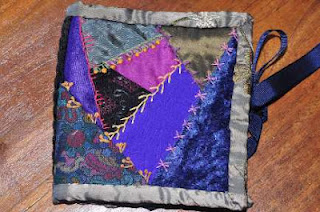 I spent quite a few minutes trying to find a matching piece of ribbon.  I've lots of ribbon bits, from previous craft interests; velvets, satin, grosgrain, picot edged - lots of it, in all sorts of colours, except the colour of the binding.  I settled for navy blue grosgrain ribbon.  Then I also realized that I had spools and spools of thread in a rather scant assortment of colours, which didn't include navy.  I ended up using black thread as it will be several days before I can get into town to get more thread.

Finished, one Victorian Crazy Quilted Needle Case.  It has 4 pockets for holding supplies and 4 pages to hold different types of sewing needles.  This one is a gift but I believe I shall have to make one for myself as I realized all my needles are tossed in with my pins and not easy to find.

I had a bunch of photos for June colours, but managed to lose track of time and it was July before I realized that I'd totally missed my timing on that one.

There were Hollyhocks in bloom.  Last summers purpley blue flowers didn't return, but there is a pink one tucked in a corner.  I had started some Black Hollyhocks last year.  They've bloomed this year, but only one of them is black.  The rest are this slightly lighter shade.  It's pretty but I don't know if it will have the same dyeing properties as the Black Hollyhocks.  I'm letting them go this year in hopes of them self seeding. 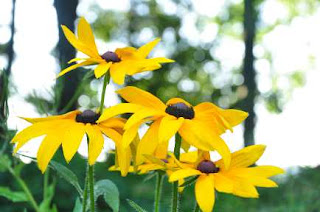 The Black Eyed Susan's have come up nicely.  With all the perennial losses we had in the garden this year, I was hoping they would be survivors.  They are pretty and their blooms last a long time, so much appreciated colour in the garden. 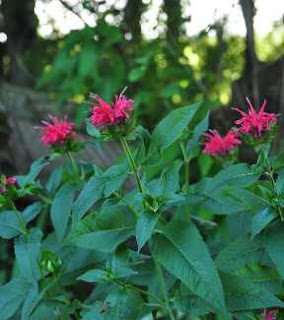 There is a tiny patch of pink Bergamot hanging out in the back of one of the flower beds.  I'd not noticed it back there, amongst the Dame's Rocket.   It was a cheerful and welcome sight when it finally bloomed.  I'd worried that it hadn't made it through the winter and hadn't noticed it, hiding in behind the other plants.   Now if only some Echinecea would surprise me with some pretty blooms.  However I think that perhaps all 3 of the plants are missing in action this year. 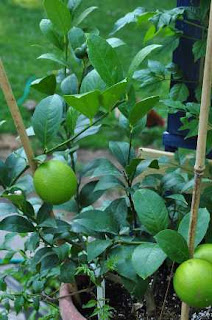 It's not a garden plant, but it seems to be enjoying the hot, muggy weather we've been having, out on the deck.  The Meyer lemon has not only fruit which is rapidly ripening, but has bloomed twice more this summer.  The first blooms resulted in 3 more little lemons and I'm hopeful that the second blooms, which are just opening will also give fruit!
Posted by Nina at Monday, July 09, 2012 2 comments: