I will admit that the last few days have not been as productive as I'd like.  Not necessarily because I wasn't doing anything but because of stupid mistakes.  I've been knitting or rather, trying to knit myself a hat.  I had a design in mind, using cables.   I swatched, started knitting and it was huge.  I ripped it back, reknit and it was too small.  I worked out my pattern for repeats, adjusted the size upward and it was still too small.  For some reason, when I redid the pattern, I cast on a size or 3 smaller than I wanted again.  I even used fewer stitches than the previous too small hat!    Brain stall on that one, for sure.

Winter has finally arrived.  The weather got cold and it snowed.   My chooks have been out in the snow before but would avoid it if at all possible.  I thought they might stay inside when we finally had enough snow to cover the ground.   Nope, they are stoic creatures.  While obviously not fond of it, they will wade through it.  A few of the girls are quite adventurous and I've seen them all over the yard.  The rest stick to the back, where there is some shelter and they can wait on deck for me in the afternoon.  When I go out to feed them each afternoon, they are flocked right by the backdoor, waiting for their scratch grain treat and any other goodies I might have for them.   It does lead to a few chicken "bombs", being left, littering the deck.  One does have to be careful where one steps. 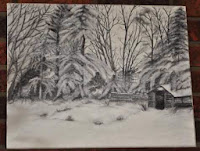 My son painted me a picture, using one of my photos as inspiration.   Okay, not exactly that photo, but one from the same vantage point, same time, same snowstorm etc..  just one which is on another computer at the moment and I've not transferred them yet.  It was a very moving gift, for sure.

I've started dressing the loom.  I ended up rejigging the pattern for this project.  It was a bit of a last minute, rushed changed, so we'll see if I got it right, when I finally finish threading heddles and do some test weaving.  I am dressing the loom front to back, because my arm reach is a bit too short to comfortable do it back to front on this loom.  The Minstrel spinning wheel has been back in action, spinning some lovely South African top.   It's supposed to be mainly merino, but blended with other wools.   It's amazingly soft and easy to work with.   It will become something lovely and warm!
Posted by Nina at Friday, December 30, 2011 2 comments: 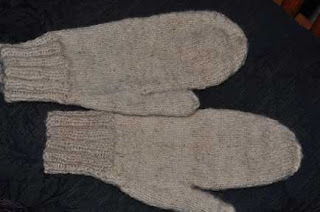 I thought for certain, that the moment I finished up the new mittens, that the old one's would surface.  That didn't happen, so I guess that my first pair of new mittens this year, really did get lost and not just misplaced.  I thought that I had better hurry up and finish the new, new mitts.  This mild weather isn't going to last forever and one day we're going to wake up and it really will be winter: cold, snowy and icy.  They are  softer than the Clun Forest mittens but the Clun Forest was a whiter, white - if that makes sense and a much stronger wool.  It was also spun woolen for warmth, whereas the Shetland was spun semi-worsted from necessity. 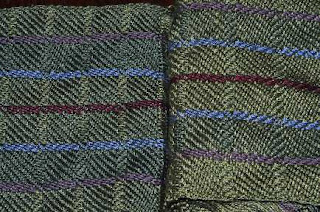 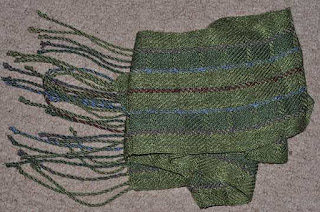 A group of gals from the Oxford Spinners and Weavers got together to do an 8 shaft,  block twill scarf project from silk.  I wove mine off in the fall.  Last week, a call went out for someone to weave off the last scarf before Christmas as the last person on the list was unable to do so.  After a few days, I put my hand up since I too, wanted my scarf for a present.  I used a different shade of green for the weft of each scarf. It's a fairly simple pattern to weave and it really was only a 2 hour weave per scarf.   It was really interesting to see the differences in weaving techniques and weft colour choices, when we cut all the scarves off.  There were 3 black wefts, a blue, a yellow and a red weft, besides my 2 greens.   I still had to hemstitch, after the fact, since I had forgotten to bring a needle with me, both times I went to weave.  Nasty, slippery stuff to hemstitch afterweaving!   Plus all that fringe needed twisting.  I'd moved where I keep the fringe twister and did panic for a moment when I couldn't find it.  I did find it, in a bin labeled FibreTools.. go figure that one!  I've most of them twisted and it makes a very fine scarf, indeed.  I lust after 8 shafts even more now, after playing with one!

The shirt has been taken off the to do list..  It might have gotten started if the fabric I was going to use, was as I remembered it.  It wasn't!  It was totally different and not appropriate.  Rather than panic or rush, I knocked it back until after the holidays.  No use stressing over it.

Tomorrow is the Winter Solstice!  Thank goodness!!!!!!  These short, dark, dreary days are getting tiresome.   I look forward to the increasingly long days.
Posted by Nina at Wednesday, December 21, 2011 1 comment:

New mitts and the before Xmas to do list 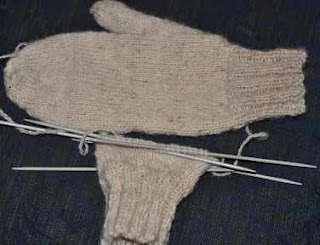 So the white Clun Forest mittens have disappeared.  I've gone and lost them before I'd even had a chance to wear them!  I'd only gotten to try them on for fitting.   I'm pretty ticked at this.  I may have put them in a safe place or I may have taken them with me and left them behind.  I figure that winter really will set in sometime and I'll really, really need mitts, so I started a new pair.  I had two skeins left from Jessie's fleece and since the fingerless mitts I'd made with this yarn turned out quite nicely, I decided to use the rest for my own mitts.   As I was winding the skeins into yarn cakes, I realized that they were two different grists.  I used the skein of slightly fatter yarn for the mitts, hoping there would be enough.  There was a little less than I thought there would be.  So, next job is to card up some more of Jessie's fleece and spin the rest of the mitten yarn. 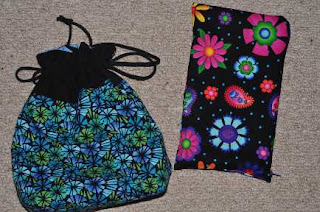 I did a bit more sewing - two knitting project bags.  I've found these to be incredibly useful.  You take all the bits and pieces for whatever project you're working on and stuff them in the pretty sack.  I try to put in all the tools I'd need, like tape measure, pattern, darning needle and thread snips.   Then when I put the project down for a bit and pick it up weeks later, everything is in one place and finishing up goes so smoothly.

Left on the to do list - a tote bag, a shirt, two embroidered labels, one loom to dress, one project to weave off at the guild, and a partridge in a pear tree.. okay maybe not the last one :).  All in all, it should be close to achievable - the shirt is a last minute addition and I'm crossing my fingers on that one.
Posted by Nina at Thursday, December 15, 2011 2 comments: 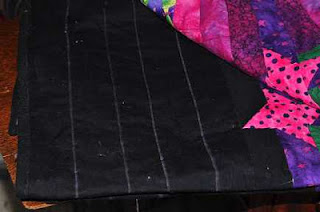 I'll have to admit that I did a bit of sewing during the day as well, but in all I marked the quilt borders, quilted the borders, cut and made the binding, and bound the quilt yesterday, finishing up just before 10 pm.  Included in that was a repair to the treadle belt as it had stretched.   The belt is leather and a new one will stretch a bit after using.  In this case it started slipping miserably and I managed to sew my finger while wrangling the quilt through the sewing machine.  Thankfully it was minor as the treadler responds very quickly in situations like that! 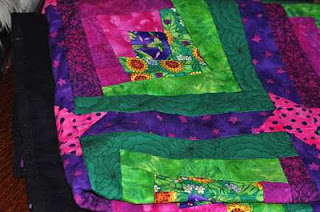 The two major projects I'd wanted to get done before Christmas, are both done.  While I was somewhat singularly focused on the quilting over the past couple of weeks, it is such a huge relief that they are finished. And no, I'm not making quilts for the other two kids this year.  I'll plan that a little more carefully and give myself more than a few weeks to accomplish that task!

Only 3 more projects to sew for pressies... I guess the countdown begins
Posted by Nina at Saturday, December 10, 2011 2 comments: 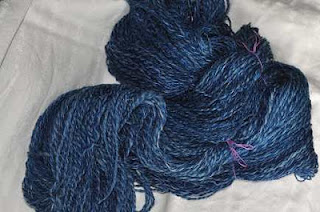 Last night I plied the dark blue singles with a slightly lighter blue from the same Dyer's Knotweed dye vat.  I am pretty happy with the results.   Now I need to spin up a bit more of the lighter blue so that I have enough to finish plying the rest of the dark blue.  This skein has about 350 yds.  It's unfortunately a tad thinner than I'd like for mittens, or I'd totally be happy with making a new pair for myself with this awesome colour.

The  wonky log cabin quilt is ready to bind!  Having the distracting hubby away on a business trip for a week sure made for a lot of productive time.  I'm hoping to get the binding cut, sewn and applied tonight.    Heidi hosts a Friday night sew in.  I'm using that as a pretense to spend the whole evening at the sewing machine, in hopes of finishing it up.  In a few minutes, I will cut 7 binding strips, sew them together, iron them in half to make a double fold binding.  Then it's two rounds of stitching around the outside edges of the quilt.   The first to attached the binding to the back of the quilt and the second to fold it over the front and machine stitch it down.  Since these are functional quilts, I don't mind the machine stitched bindings.  They will be far more durable than handstitched bindings.  While I'd prefer the quilts not to be abused, I also don't want my kids to be worried about ruining them if they use them.     I'm off to finish up the quilt!