Catching up with projects. 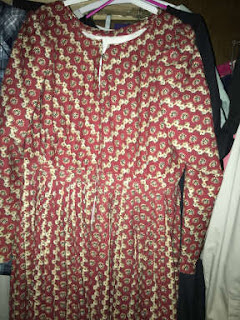 I was doing a lot of spinning, trying to get yarn made for the hooked rug.   But then I started teaching a 3 week class on Beginner Spinning, so needed to empty my wheels for the last class when we'll be trying to learn the basics of the spinning wheel.   So all my wheels are empty right now.  Now to empty the bobbins.

I also realized I needed to get my 1830's dress remade.  The sleeves were heavy and one of them snagged on something and has a tear in it.   As well, the bodice wasn't all that comfortable.  I had an extra yard of fabric leftover, and I'd found another 2  yards or so on the discount,end of bolt shelf.  I recut the bodice and the sleeves.   The bodice is much better fitting now although the sleeves are okay, I'm going to recut them.  I miscalculated when making them a little less pouffy and ended up making them just a tad too small in the length.  Luckily I have enough fabric to re-do them.  I thought I'd had them cut on the opposite bias but obviously didn't, so I'll also try that one again. 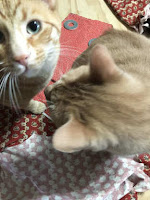 I did a few things right though, like getting the bodice cut just a bit more on the high waist and a better take on the neckline.  I used the skirt from the original dress.  I'd attached it on a waist band so it was simply a matter of unpicking 2 seams and sewing the skirt back on the new bodice.

Phil and Dion were both excited when I pulled out the fabric, pattern and weights.   I had to actually walk away from cutting for a bit, for them to get their enthusiasm and curiosity out of the way before I could make any headway with the project.   I did this project properly, with a full muslin mock up of the bodice and took my time fitting it.  I did all the fiddly bits properly and even sewed on the hook and eye tape by hand to get it perfect.   It all added to the amount of time it took to make the dress, but was well worth it.  I still don't like fitting myself though. 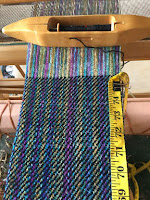 I have 3 of these colourful scarves on the loom right now.    I have lots of the black but I'd like to find a skein or two of some of the other colours in the warp to make brighter, scarves.    There is lots of sparkle in this warp, which looks quite nice when woven up.   This is the scarf I played around with setts to find the best one.   I should just get down and weave them all off, but with the dress making session and FOOL stuff, I just haven't felt the love.  Part of it is that I don't really love making scarves either.   Lots of repetition, short throws of the shuttle and then you get to twist fringes afterwards..lol 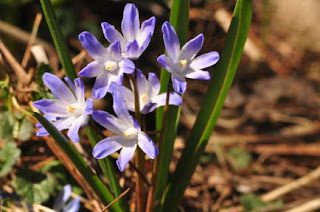 Some pretty early spring flowers to cheer up the day.  It is another grey day here, damp and cool.   Most of the spring has been damp, grey, cool and windy.  There were a couple of days when it was warm enough to take the banjo outside and play on the deck.   I love doing that.

Starting but not finishing

I've started lots of projects, but not actually finished much lately.

I am working on an 1830's dress block.  It's started, but I'm still working on fitting it.   I am quite slow to actually fit clothing for myself.  I find it fussy and difficult.  It's so much easier to fit someone else!  I don't have anyone local who can help me with this, so it's a solitary task which I have to work to keep it in focus. 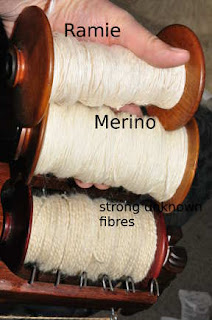 I've been spinning. I realized I hadn't been spinning on the Kromski Sonata in ages, so I pulled it out of it's storage bag and set it up.   I'll have to admit that my Minstrel is what I consider my workhorse spinning wheel.  It does everything I ask of it and is super easy to work with.  However, it isn't very portable. I like to keep up with the Sonata as it's my demo wheel and I like demos to go smoothly and effortlessly.  Practice is the only way that happens.

Usually these days I keep a cotton project on the Sonata because few people ever demo cotton, but that came off and I put on some white Ramie.   I got half done it and realized I was about to do a demo and since it was a local gig based on "pioneer" days, I figured that wool was a better choice.  Off came the bobbin of ramie and on the new bobbin, I started spinning some lovely, super soft Merino.   I got home and a couple of days later I was playing with fibres for traditional rug hooking.  I spun up some of that gifted unknown but strong fibres looking for the right grist.   The bottom bobbin is plied, but I'm still not happy with it, even though it's lovely, evenly spun yarn.  It won't work for what I want to use it for. 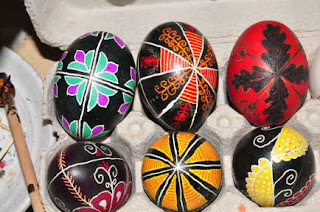 I've been working on Pysanky for Easter and for a demo and Westfield on Good Friday this year.   I tried a few new things like using one of my green eggs when I was out of white ones.   My daughter liked it, but to me it threw the colours off.   I also tried painting small spaces with a brush rather than a whole dip.  This worked well, but on my sample, it showed as black, which won't work with a black background.  I also found out that without my task light, I leave too many little uncovered spots when waxing over a large area.  Right now my task light is on some woad plants I've started early.

I took an introductory class in Traditional Rug Hooking.   I enjoyed it immensely and realized it would be a great addition to my demo skills for Westfield.   I had a bunch of ideas for rug patterns, but ended up doing a slightly more modern one which I decided wouldn't over reach my very beginner skills.  I'm using handspun yarn instead of wool strips because I have lots of yarn and very little wool fabric.  Since we are finishing the roof this summer, putting in the rest of the raised beds, adding new gravel to the driveway and I'm really hoping to take a real holiday for a few days, I decided against purchasing commercial wools from the Hooking shops, due to cost.   I'm pretty sure that I have handspun yarn samples that are close to the right grist that I can use up. 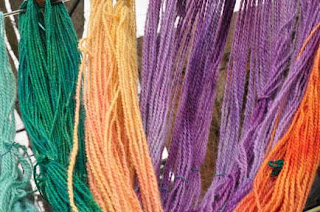 The yarns are generally white or grey though, so I've been dyeing them up.   I've been using up some Procion MX dyes, using them as acid dyes and I've found they are a little bit more difficult to get good varigated colours with on wools.  I do love the bright colours though.  I have more dyeing to do before I'll have enough yarn and colours.

I've got some scarves on the loom.   They are long and sparkly.  I am playing with sett though as the first one looked nice but was a bit firm.  I dropped it down 2 threads per inch and it was obviously too loose.  So I re-sleyed again and am hoping that third time is lucky and I've got it right.

Added to this is all the pre-event planning which happens before a weekend long SCA camping event.   We've had a few lovely days, sandwiched in between cold, rainy, dreary weather.   Oh, I'd like the sun and warmth back please!

Got scraps of wool fabric too small for hoods or trim?  I'll take them!