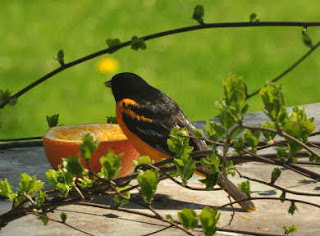 We have Orioles this year!   They are so pretty and colourful, with a nice little song.   Once we saw the first one, I started putting out oranges for them.  I tried apples too, but I think I just fed a raccoon with those.

We also have a Rose Breasted Grosbeak, who apparently likes to eat oranges too.   I've never seen one of those before.  It was gone before I could grab the camera. 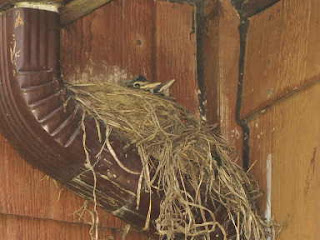 The robins have finally moved their nest.  They have built a nest in the light fixture beside the garage door for the past several years.  When the chicks finally fledge, they spend forever flying from nest to whatever vehicle is handy.  Back and forth they go, all day, leaving the car or truck with large white streaks.   Now they are in side yard.   I took this last week.  Today the nest is empty and the babes have fledged. 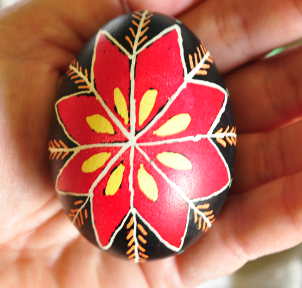 Last weekend I took a class on Pysanky.  I learned to do this as a child, using a somewhat different method.  Although still using the same materials and tools, this way was much easier.   While the lack of light, finishing the egg up in the evening, without a proper light source, shows on some of the missed spots, I am really pleased with how this egg turned out.  There are virtually no blobs an icky bits.  The class was really well done and the participants were a great group of people.  I had much fun. 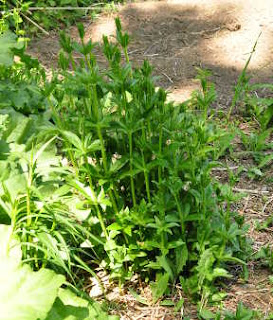 I was away for the weekend.   I checked my garden on Friday, before I left and the Madder plants were  all back, about 2 inches high. I came home Monday afternoon and the Madder was at least 12 inches tall.  This particular plant was taller.  Absolutely unexpected and crazy growth.  The Madder patch has finally started spreading.  I will dig a bit out of it this year and then hopefully, the rest will fill in the gaps.

I have a European Black Currant bush in my garden.  In the past 5 years, I have harvested 3 berries.   That's it, a paltry 3 berries.  It isn't that it doesn't bloom.  It gets tons of flowers.  However, as soon as it flowers, we get light frost or a couple of cold days, which cause blossom drop or that is what I think is happening from the Omafra website on currant information.  Anyway, we get a couple of cold days and we don't get berries. 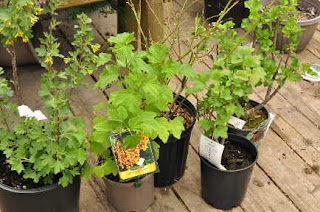 I was hoping with the very cool weather this spring, that maybe the flowers would just hold off enough to allow a currant harvest this year.   However, they are in full flower right now and we are supposed to have frost on Saturday and Sunday nights :(

For Mother's Day, in hopes of allaying the yearly black currant disappointment, some garden centre hopping happened.   I was looking for a Black Currant variety recommended by Omafra, but couldn't find any at all.  However, I came home with one that has good recommendations.  We also found a North American Black Currant - similar but not the same and much hardier.  Then on Sunday, most of the garden centres were closed, so we went to one that we rarely visit.  My son found me a white currant bush, a pink blueberry bush and then he hunted down a Josta berry bush.  Josta berry is a cross between a gooseberry and a black currant.    Our gooseberry bush is really old.   Everything I read about them says they should be replaced every 10 - 15 years.   I've taken cuttings in hopes of propagating some new ones and then we can replace it with the Josta berry.  If it works, we'll probably have half a dozen gooseberry bushes popping up in weird places though. 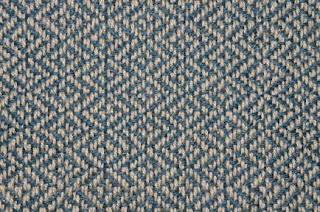 This is off the loom and drying after wet finishing.

Stupid threading errors are infinitely more obnoxious to fix on the warp weighted loom.   I had a threading error on the first twill threading and it made it into a broken twill, which was nice enough but really not what I had intended.   By the time I had realized that I had undone the wrong heddle rod, I decided to redo them all in a diamond twill.  This is what I had wanted to do in the first place, but was getting a bit confused on how to tie it up.

I am currently reading a thesis on the warp weighted loom and she has surmised that multi-harness weaves are better worked with only one row of weights.   I thought I would try it, since it sounded like she had experimented herself.  However, having tied up the loom, with all new heddles, it turns out that it didn't work for me.  The pictures and diagrams of old looms, show 3 heddle rods and it is thought that the bottom support bar acts as a "shed bar", helping the 4th shed being just open.   This

works really well.  However, the open shed wouldn't actually open at all,with only one row of weights.  It might have worked well with an extra heddle rod, but I only have 3.  The next redo had me make my heddles too short, so I had virtually no workable shed.  It was miserable to weave with, so out they came again.   By now, I had done more research and found Marta Hoffman's diagram on how to thread one of the Birka twills.   Of course, the open shed in this diagram was 1/4, rather than the plain twill 3/4, so I  un-knit all the heddles and re-tied them again.

I made a mistake on one of the shafts and had to do it twice then finally got to start weaving! 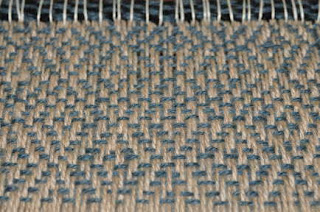 I am using a stick shuttle instead of a weft butterfly, mainly because I sometimes need to travel with the loom and my weft butterflies keep getting too tangled to be of use.  I don't think it makes weaving any easier.

It still isn't my favourite way to weave.  I do like my floor loom, but it is very satisfying doing something other than tabby weave, which is by far the easiest way to dress a warp weighted loom and what the weave structure is of virtually all the projects on looms I've seen in real life or in photos.  I'm sure there are project twills out there, but I just haven't seen them.
Posted by Nina at Monday, May 09, 2016 No comments:

Dressing the loom....  I really, really didn't want to do this right now.   It takes a lot of time and I've got a couple of major time consuming activities happening right now.   However, one of them is preparing to speak about Early Northern European Textiles.  For that, I need the warp weighted loom.   I've only used this beast a couple of times in the past few years.  Mainly, it has been sitting in my garage; that same garage where Kevin likes to play.

The project that was on my warp weighted loom has been there for a few years.  It was getting ratty anyway, but I'm pretty sure that Kevin has been playing with the warp threads, knowing how much he likes to chew apart wool projects which are important to me.  I was going to try to repair a few of them, but it turned out to be just too many to bother with.  The fact that I hadn't tied on the tablet woven warp header in enough places, so the tension was uneven, really meant that I had to put a new project on.

It meant winding a new warp and weaving it through some tablet weaving.   There are examples of this in archeological textile finds, including a completed warp, ready to dress the loom, hanging from a tablet woven header.  I didn't research the tablet woven pattern, just stuck something on which used only a few tablets and was easy to weave.  (Note to self, incorporate a reverse turn in there so that the threads  unwind on their own and you don't get the twist setting in on the finished band.)

I tied it onto the warp beam every few threads, going one way and then back the other.  I have enough string to make heddles but I wasn't sure if I had enough to tie on the warp, so I used 2/8 cotton.   I had some linen thread, but it was only a single ply and I really wasn't sure it was strong enough.   I may go over it again, just to be certain, only because my weights are about 1 lb each.  I don't want to have to re-tie the header just because there was too much weight for the cotton string.


This photo bothers me because of the busy background.  Unfortunately with the kitchen renovations going on right now, my kitchen bits and pieces are scattered throughout the house and the dining table has become storage space.  The table was pushed back to the window, to make space for cupboard storage, which will be needed soon.  Right now though, it is the only space large enough and open enough for my warp weighted loom.  It works only because my warp weighted loom is self supporting as well, with non-period back legs, hinged at the top.

I am hoping I made my warp long enough to be of value.    The cereal box weaving cards are also not authentic, but they are functional and cheap.

Next step is to knit the heddles onto the heddle rods or rod, depending on if I do a tabby or a twill.