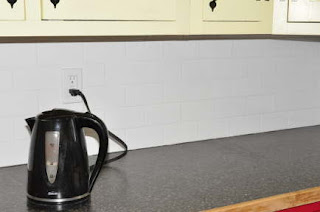 The kitchen back splash has been taking up a lot of time.  It's just plain white subway tile with white grout but it works with the already colourful kitchen.   The white lightens up the under the cupboard area.     Because the only time there's been to work on this, has been a couple of hours in the evenings, it seems to be taking a while to get done.  I think that when you just count the hours though, it's been pretty quick. 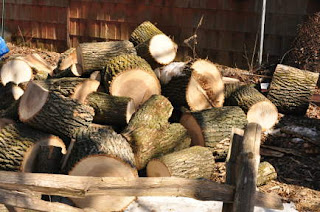 A friend just bought a new place and it is surrounded by Ash trees, which have been decimated by the Emerald Ash Borer.   He's had to take down about 40 of them, which he offered to us.   So the tile project and every other project, has been in between loads of wood.   I'm pretty sure my sweetie is happy to get to play with his chain saw.    There is still lots to get but the ground around  the area is just thawing and the truck almost got stuck - hmmmm there's a country song in that line somewhere - so we're waiting for the ground to dry out a bit. 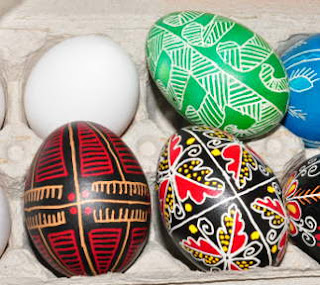 I'm still working on Pysanky.  That quartered oak leaf design took hours to make, though I rather impressed myself with it.   The green one with waves is an attempt at a reproduction of one of the earliest pysanky found still mainly intact.  The description says it might have had two colours as well as the white but I used only the one.   It's apparently a wave pattern.   It's a quartered pattern as well, and all those little lines took forever as well.  The original was done on a goose egg.  Mine is just a chicken egg.

The brown egg design is wobbly.   It shows what happens when you put on a video while trying to write pysanky.   It just doesn't work very well.

Other than that -  Banjo!   I had to fiddle around a bit figureing out why I was in a bit of a playing funk.   It turns out I wasn't happy with the very blue grass music my books and music had, and with a bit of effort, I found a new direction in a more melodic format, which is keeping me busy.... and happy... and waiting now for a set of new strings to come in at the local music shop as they think everyone should play with medium strings and not the princess light weight ones.  I have to order them every time I need them.... sigh...

Despite having 6 young chooks, only 1 or 2 were laying over the winter.   Of those eggs, I was leaving 1 in the nesting boxes overnight to feed whatever predator was wintering over in the barn.  It worked and we lost no more hens over the winter.   Finally the past few weeks I had to actually purchase eggs as there were so few of them.   Then when the unseasonable thaw happened and the barn flooded, I found a 'possum hunkering down in the nesting box.  He or she seems to have moved on now and with the longer days, we have gone from virtually no eggs to 5 a day!    I happily made this lovely angel food cake with my girls daily contributions.  It was delicious and such a nice treat.

Westfield is open again for the year and I'm happy to be back as a volunteer interpreter.  Hats are a costume piece that I've often needed to borrow from the costume department.   But I had double buckram, the proper millinery wire and a pattern, so I attempted to make my own.

It wasn't one of my neatest projects, at least on the buckram frame.  Luckily it's completely covered, so none of the stitching mess will show.   I had to play around with threads as some of them just wouldn't hold tight enough.  In the end, I raided my husbands leather working tool kit and got some of the heavy waxed leather working thread and a ginormous needle, which seemed to help a great deal.

The lining was some yellow and red shot taffeta which shows as orange mainly, but when it hits the light in the correct way, the red flashes.   The effect will mainly be lost on this hat lining but it was in my stash, so one less thing to purchase.   I had to baste the lining by hand in order to get it to fit the inside of the hat.  This is the 3rd time I redid the basting and finally got it right.

What a pain to put in the hat though.  The instructions said to glue it but not what kind of glues work best.  I had a spray adhesive but it was a different brand from my usual basting adhesive.   Ick - the tin leaked, leaving a mess when sprayed and it didn't stick at all.  So much for the "permanent" part of the glue name. 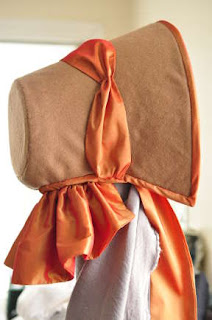 I used some brown wool for the fashion fabric.  Here I was a bit torn about what to use.  I had some black velvet, which would have made a lovely hat, with the taffeta, but I only saw a few black bonnets and most of them were mourning bonnets, which I didn't want to have.   I had a darker brown, which would have also been nice, but there was just enough to use for something like a coat or a skirt, but not enough for both that and the hat.  In the end, this lighter brown wool was lurking in with some t-shirt knits, and had already been cut, so useful for a project like this.  I do like the less dramatic effect though, so that is a happy outcome.

The hat isn't finished yet.  I'm not sure about the ties but they are tacked in on the inside in an odd place, but the only place that kept the hat on my head.   I haven't finished decorating it.   There will eventually be some bows or a flower spray on the outside and some shirred lace or something on the inside.   My fingers and hands are sore from all the hand sewing though, so the prettying up of the hat will have to wait. 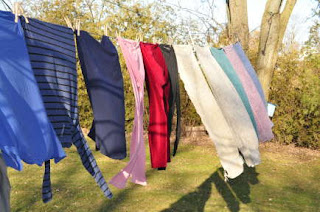 While it snowed again and was blustery last night, earlier in the week it was warm enough to hang laundry outside, two days in a row no less!   It was gloriously warm and sunny, with a bit of a breeze so all the laundry actually dried completely as well.  I like hanging the laundry out, so when we get a couple of bonus days like we just had, I always try to take advantage of them. 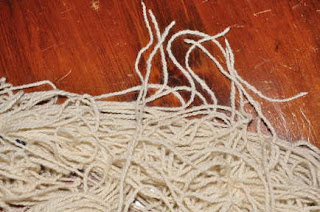 I finished plying the first skein of the Merino/Alpaca blend I've been spinning.   Last night I washed it and hung it to dry.  I even paid attention to where I was hanging the skein, to try to keep it out of reach from kitty paws and jaws.   However this morning, despite my efforts, the skein was messed up and chewed to pieces.  Nobody knows which kitty it was though and not a single kitty it looking at it as if it were prey today.    So is yarn only a toy at night?   It seems that all the cats will ignore it during the day but it is fair game in the dark.   Now I need to find a safer place to dry skeins!

I'm calling these my warm up Pysanky.   I'm doing a demo at the end of the month and need some samples.  Knowing how long it takes to write each egg, I thought that I'd start early.  I'm pretty happy with these two eggs, though the contast on the blue and turquoise one could be a bit better. 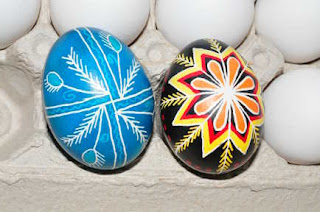 I'm hoping to have not only a selection of different designs to show, but eggs in different stages of decoration to work on during the demo.  I think it would be easier to show to process that way, rather than just explain it while working on eggs as it takes even longer to decorate an egg while talking.     I will definitely try to keep them a bit safer from little hands this year.  I'm getting my daughter to do a supply run to the Ukrainian store in the city for me.   I'm trading her maple syrup and maybe some pie ;)