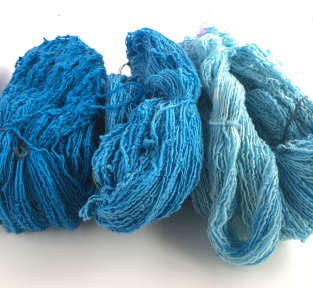 I'm spinning up the last of my "good" wool sliver.  I have a bunch of mill ends, but this was the last bag of clean, well processed sliver.  There was just under 300 g of Merino in the bag.  I spun up just over 1000 yds of singles.   I dyed them using weak acid dyes, by adding each skein in order after a specific time.    I have three skeins which are different shades of the same colour.   They are destined for a woven scarf project.

I will using gelatin sizing on them just to be sure that they will hold while weaving.   By mixing up the gelatin double strength, soaking the warp in it and letting it dry, there is less abrasion and breakage of the singles.   The gelatin washes out easily when the finished item is soaked in warm water. 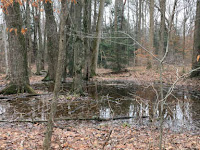 My sweetie had a week of holidays that he "had" to take.   It was another week at home.   We did some lovely short hikes on the days that the weather cooperated.   This trail was one we'd done in the summer, but had been driven back by the mosquitoes.   They were unexpectedly thick and we really couldn't finish the trail as we weren't prepared for that many bugs at the time.     Now of course, the weather is cold.  It was quite brisk and made for a lovely hike.   We could see why there'd been so many mozzies!  There are several ponds, a very slow moving  stream and an unexpected amount of standing water. 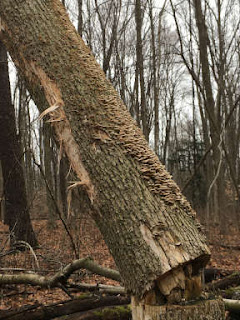 The Ash trees had all been cut down.   It looked like they had been only cut part way through and then either pushed or allowed to fall naturally.   Many were caught up in other trees and at weird, precarious angles.  This was the best one with the fungus crawling up the trunk, like scales.

We weren't the only people there that day.  There were a number of people out there which was nice.  Everyone kept their distance but were friendly.   The best comment was from a gal out walking with her mother, who told us that "there weren't any bears"!   Since we don't live in bear country and they are rarely sighted in the area, it gave me a good set of the giggles.

There is snow on the ground again, so it's doubtful we'll get much more hiking done until spring, but it was great weather for a week off to play outside.    Sweetie also got a lot of headway made on the last pile of maple which was encroaching on my parking spot.   I can park my cute little car safely once again!

Despite all this, there was a lot of down time, including one day which was so dark and grey, that almost nothing was accomplished, except some Animal Crossing and video golf.   I can totally understand the worshipping or celebrating of the winter solstice.   The last couple of weeks with short days can be really frustrating.   I had to be in town for 8 am, and I needed to use my car headlights, and I'm having to make sure that I'm feeding the chooks well before 4:30 pm, or they are already starting to roost for the night.  Only a few more days! 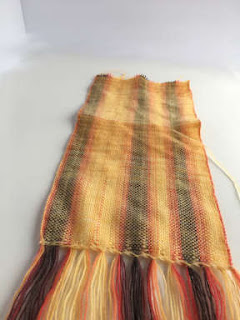 I just cut this part scarf off the loom.   I found some Paton's Lace yarn on sale and picked some up to weave a shawl and a couple of scarves.   It's lovely in the skein, not so much in the woven fabric.   A master weaver friend told me once that if you think there is something off with your fabric, or you don't like it and don't know why, it's probably your sett.

I definitely had the sett just a tad tight.  The fabric was too dense and felt a bit stiff.  Not only that, but the outside threads started shredding.   I've woven with this commercial knitting yarn before without issues, and know a friend who did so with lovely results, so I'm not sure what was going on with the shredding.  However, I cut off the bit that I was weaving and re-sleyed it in a crammed thread/loose thread pattern, trying to get a bit of life and whimsy into the pattern.   This has worked really well, except the outside threads are still shredding and I've not decided what to do about it.  I will either put some floating selvedges on it, or sacrifice the yarn and cut it off.   I just noticed this morning that it's awfully close to Christmas and I haven't even thought about the tea towels my kids requested.   I've not thought about the pattern, colours, any design.  The warp isn't wound and eeek.. I'm running out of time. 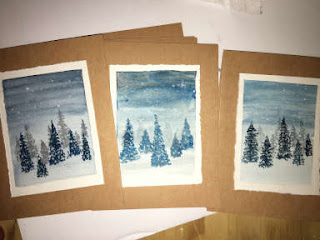 My Christmas cards are done.   This year instead of carving a design for block printing, I tried my hand at water colours.   I have some ancient gouache paints from previous experiments and although they are opaque, rather than transparent, like true water colours, they can be used in a similar way.   I'd like to try some real water colours and see how they differ.  However that will be for another time.  My son, who is a talented artist, declared that they were okay, and the people who received them would appreciate them.  I got a giggle out of his effort to be supportive. 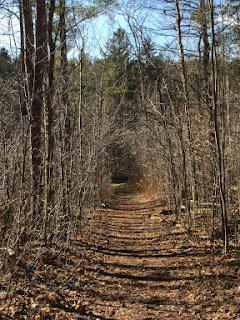 We got one last hike in before it snowed again.  It was brisk out, hovering just above freezing.  It was however sunny and there was almost no wind, so it was a great day to be out.  This is a trail we haven't taken in a while.  It was a nice change to be walking on soil, leaves and grass instead of the gravel that most of the well groomed walking trails have in this area.

I've been spinning in the evenings.   I've been mainly using up bits and pieces of stash. The blue merino superwash was a bit compacted and I probably should have run it through the carder or hand carded it before I spun it.  It was a fast spin and I didn't really worry too much about it.  I was just happy to have it spun and out of the way.

On the last nice day, we got yard work done.   I got all the leaves off the deck, the hose put away, which is a bigger job than you'd expect since there is about 100 feet of hose, maybe more, and it was frozen stiff.    The part of the roof we had redone is finished, with new eavestrough and because it's the very high part of the house, we had that eavestrough leaf guard installed - yay!

The bad things are that the mowing deck on the lawn tractor just rotted away.  The paint started bubbling  and this spring my sweetie had to get a friend to weld part of it back together.  Now it has rusted through in multiple places, so it needs to be replaced.   However, the part has been on backorder forever,  and we aren't holding out any hope that it might available anytime soon.  Luckily it's winter and we won't need to mow the lawn for a while.   The second thing is that t is just a nuisance.  The wood guy stopped by and commented on how quickly the last load of wood was cut up and split.   My sweetie laughed and said it was a perfect load and he'd take another like that any day.   Well of course two days later, we had another load of wood, not quite as perfect though, dumped beside the driveway.  The weather hasn't been conducive to getting it processed though, so it's just sitting there, almost in my parking spot.  I can't imagine that there will be time to get it processed and stacked for drying anytime soon, at least with just himself doing it.   I could be a winter driveway decoration!