I'm home.. early.   I wasn't feeling well, so I sadly skipped Tyrell and the Badlands, switched my flight plans and came home 3 days early.    Luckily, I got most of the course done and didn't miss much.    The Olds campus is incredibly beautiful.  It's huge, somewhere around 680 acres, including extensive manicured grounds which show the talent of their horticulture department and even a full working farm.   Photos of the grounds another day though...

The course was interesting.   I wish the instructor had been a tad more prepared earlier in the week.  By the day she was being evaluated, she had gotten her bearings and the day was a really enjoyable one.   On Wednesday, we reeled silk.   It was a pretty fascinating experience. 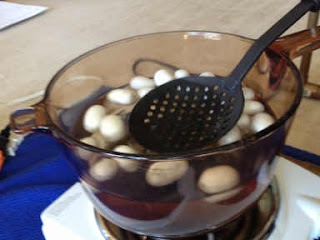 They were pushed down a bit.  We could hear the air expelling as the seracin softened. 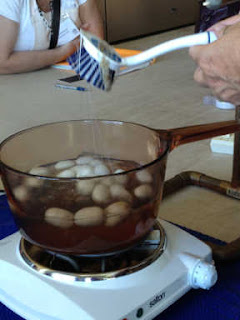 When they started to float low in the water, a brush was used to start picking up the strands.   The goopy strands on the brush are the outer layers of thicker, broken and slubby strands.  We had to wind those off until we came to the true start of the silk strands.    We had about 8  - 10 strands of silk there. 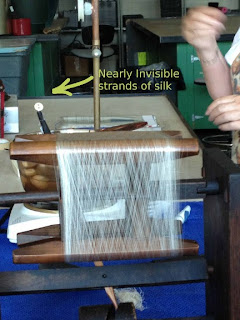 The true strands of silk were then wound through a rack with eyelets and pulleys.   The thread wound back through a loop made by picking up an earlier part of the thread, which allowed the water to be squeegeed off before it hit the silk reel.   Even with that many threads, we could hardly see the strand of silk.    We each got to pick up another silk strand from a soaked cocoon, wind off the trashy bits and then learned how to add it into the strand. 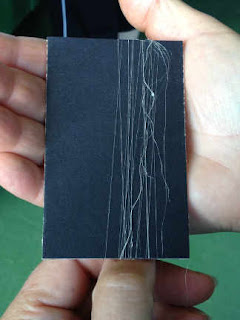 This is the resulting reeled silk!   It was a very interesting afternoon.
Posted by Nina at Saturday, June 29, 2013 2 comments:

Day before I leave!

I'm almost packed for my trip to Fibre Week which will be held at Olds College in Alberta.  I've done a bunch of weeding, lots of laundry, checking and labeling  yarn samples and digging out equipment that I'll need.   If I didn't need to bring a whole mess of spinning tools, I could have packed all my clothes into a carry on and have been done with it.  However, over half of the suitcase is filled with tools and equipment, so I'm ending up having to take a carry on bag as well, for those things I don't want to risk losing or having to wait on should my baggage get delayed.  So much for traveling light!

Early this spring, the grocery store had potted tomato plants for less than $6.  On a whim, I bought one.  I'm amazed at how many tomatoes are on it already.  While the garden tomatoes should start to produce later this summer, this plant should have ripening fruit before too long. 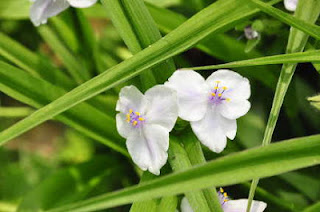 Spiderwort: a funny name for a pretty flower.   There is a patch of these in blue as well, though they weren't quite ready to bloom yet. 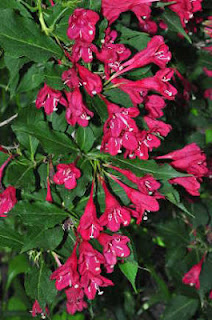 The Wiegla is quite old and while it's bloomed fairly nicely, it was getting not only huge but straggly as well.   Last summer I took the pruners too it and lopped off all sorts of branches, thinning it out and trying to tame it somewhat.   This spring it is covered in pink blossoms.   There are more flowers than ever!

A week of spinning has the merino/silk blend now filling up half a bobbin.  It's going to be a long haul to finish this up.  I did take a picture, but it looks pretty much the same as this, only more of it. 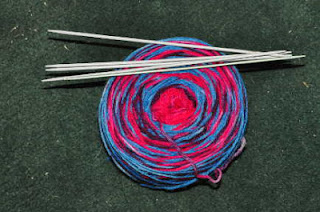 The plane leaves stupid early tomorrow morning.   The last time I flew was 1984, and people tell me things have changed, thus I have packed breakfast.  I've also got a couple of  novels and a pair of plane socks to knit.  I contemplated a fancy pattern, but decided I didn't want to have to drag around a paper pattern.   I also switched up the dpn's for two circular needles.  I had this awful dream about dropping a dpn and it rolling under someone else's seat.   There is no way the circs will do that and I will sleep better tonight.     This is a lousy colour rendition, but it's the yarn I dyed at our last guild dye day.  It looks much more accurate in this photo.  The stripes would likely obscure a pattern anyway, so I will do a plain jane, ribbed sock.

Kevin Update and on the wheel

Kevin kitten is no longer very kittenish.  He's pretty much all grown up.  Gone is my cuddly little kitten.  Instead he's a very outgoing, curious and brave little boy.   He still loves his snuggles though, but he's definitely my husband's cat.  He adores Al, even waiting at the window for him when it's about time for the truck to pull in after work.

He wants to be an outside cat though and we haven't had an outside cat in many, many years.   So much is his desire to go outside, that he pushed open the screen door by himself, has snuck out when I'm trying to let the dog out or in and now just scratches the door or window, meowing in a loud way, to get outside.   So my sweetie has been taking him out to play.  At first he was using a leash and harness, but that was not satisfactory to poor Kevin.  Today, he got out without the leash.   He was good an kept close and came back in after a few minutes.  Better than the time he escaped and we couldn't find him for hours and hours!

To keep my spinning skills warmed up before level 4 starts in a week and a half, I've been spinning this Merino/Silk blend.  It's very, very purple.  It's taking forever but I'm spinning it quite finely.   I decided to use a short forward draw so it's a lovely worsted.  I'm not yet sure what I want to do with this, but I knew that it wouldn't be mitts or a hat.  More likely it will end up as part of a scarf or shawl warp. 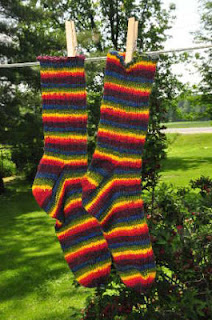 Rainbow striped socks are finally done!  By some odd accident, the stripes, while starting at slightly different colours at the cuffs, match up by the second repeat and stay matched up until the toes!   They sure are bright and cheerful.   I'm quite tempted to put another pair of socks on the needles, but I think I may wait another week or so.  That way, I'll have them for a travelling project. 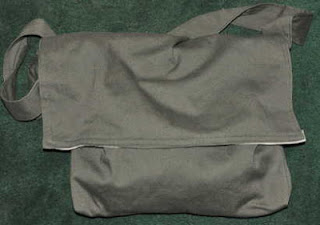 The second incarnation of the messenger bag is done.  It's made of a simple khaki cotton twill, with a heavy cotton twill lining that I found stuffed in a box.  The twill was almost a skirt length, but not quite, so I figured I'd not planned anything else for it. I put a front and back pocket in the lining but forgot the two side pockets this time.  Since it's a single piece out and inner, with box pleats, forgetting those two side pockets was pretty easy to do, since they'd be patch pockets, sewn on after the lining was completed.   It is a good deal smaller than the first, about 2 inches smaller in all dimensions.  It makes it a much more comfortable bag to wear.  I think I'll add a closure of some kind to the bag, just to secure the flap.  Next time I'd round the corners of the front flap and at piping to the seams to add some interest.  Still, this one is quite good enough to be my go to bag this summer.
Posted by Nina at Wednesday, June 12, 2013 2 comments: 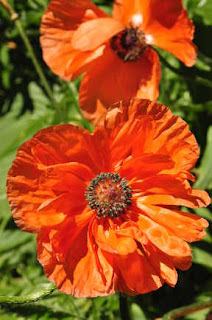 The poppies are almost done.   They have such a short blooming period, like their fiery red colour, incredibly beautful, they are a flash in the pan.  Tomorrow, they will all be gone, until next year. 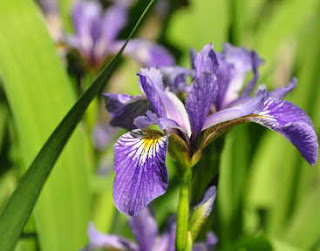 The Blue Flag Iris in the pond are blooming.  They are all coming on at once, perhaps due to the cool, grey weather we've been having?   The yellow day lilies which should be next have decided to bloom at the same time this year :(  Pretty, but it means that for the rest of the summer there will not be much colour by the pond as all there are left to bloom are the ditch lilies. 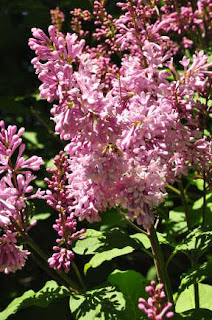 This lilac flowers quite late, after all the others are gone.  Until it's in full bloom, the scent is a bit "off" and only noticeable when you are right by the bush,  but once it blooms, it is so sweetly fragrant that the whole yard is scented when the sun shines. 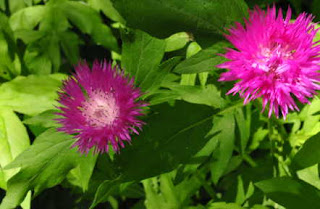 I don't know what this is.  It has smallish flowers which look almost thistle type flower, but without the seed puffs and it doesn't seem to have thorns or prickles.  It is hardy and is happily blooming this year.  The Bachelor's Buttons didn't make it through the winter and I can't find any signs of the Coreopsis that I had nurtured through 3 seasons, so I'm a bit torn.  Happy that this pretty pink flower is blooming and sad because the others will need to be replaced. 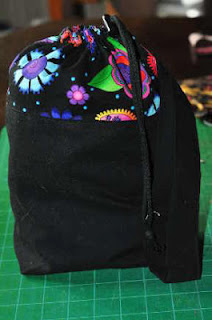 I've been knitting on those darned socks as it really does seem that if you don't actually do the knitting, they just sit there doing nothing on the needles.   An update on those another day as I moved one almost finished sock to a stitch holder as I was heading out for the weekend.  I didn't want to have to worry about counting for the toe or grafting while I was going to be distracted with lots of friends about.  Now I have one sock needing the toe knit and another on the heel flap.   It feels like I've not accomplished anything yet.

In between trying to get the rest of the garden planted, I've been sewing.   I stitched up a project bag but it's a bit larger than I'd wanted.  It's a good recommendation for measuring out a project before you cut it.  Making the bag is pretty easy and doesn't really need a pattern, but measuring first would have meant a bag I really wanted to use. 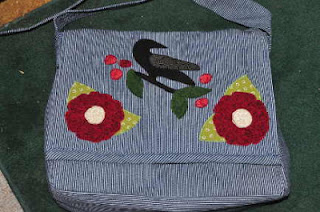 Here is the second recommendation for measuring first.   I planned to make a messenger style bag.  I drew out my pattern on graph paper and proceeded to cut it out and sew it together.  Last minute I decided I wanted to play around with applique.  As I started to stitch it down, I realized that it's been a long while since I've done this.  It took a few minutes for all the info and experience to be retrieved and sorted out before I was happy with all my stitching.  Next time I would use a different flower so as to not have that rather headlight effect.   In my mind I saw it will lots of beads and embroidery stitches making the stamens, however in reality, those beads and threads are still in their respective storage containers.      The bag is much bigger than I'd envisioned although the measurements are what I sketched. I  just didn't put a ruler on to paper to plan it that way.   Next time too, I'll do the construction a bit differently as this one had way too many pieces and I chose the most complicated assembly plan ever!  It was meant to be a useable mock up.   Now it's still useable, but I'll redesign the pattern before I make another one.     It's got tons of pockets inside, including ones suitable for pens and double point sock needles!

As to the garden, there are still a couple of things left to plant but it's mainly in.. finally! 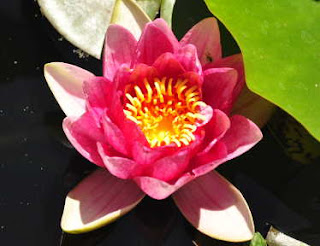 First waterlily of the season!  It's so pretty....