This morning had a tad bit of excitement.   We heard a strange  rumbling  noise and a huge shadow in the sky, flying  low and close to the house.   From the window you could see it was a very low flying hot air balloon.  I've seen hot air balloons take off up the road, but I've rarely seen them flying overhead.  One of the few times they were visible, the balloon flew right over us.  They were low enough that they ran the burner, with a definite loud whoosh and rumble.  The poor chickens  who were out, freaked and ran to the trees to hide.

This balloon was loosing altitude quickly and was very obviously coming in for a landing.  I'm guessing it was unexpected as the field they were landing in, is still full of standing corn.

Then there was more noise and this second balloon was floating by.  It was a bit higher than the first balloon, at least in the distance.  It's difficult to tell how high they actually are from down on the ground though.   As it was approaching our house, it seemed to be dropping in altitude.  The burner made an awful racket, however, you could still hear their conversation!  That was unexpected. 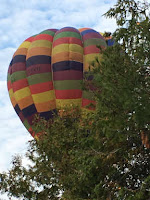 The balloon ran it's burner just before it came to the big maple tree in our yard.  It was pretty spectacular to watch.  I really was hoping they knew what they were doing, and that they were higher up than it appeared from my vantage point. 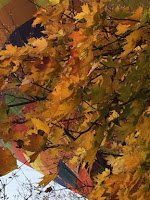 This is what the hot air balloon looked like as it passed by the maple tree on the other side of the yard. As it floated by, I hoped that it wouldn't  have to land on the farm next door, as they have horses.  That would be a bigger panic issue than a few chickens and likely cause more damage than crushing a bit of field corn.

I didn't walk up the road to see what happened next.  I did watch to see if they gained altitude.   It didn't seem like it. The first balloon was packed with people.  The second one seemed to have only a couple of people on board.   I hope they had smooth landings and didn't cause too much damage though, to themselves or the fields.

Cake! Yum.  I found a copy of The Galt Cookbook, published in 1898 by Margaret Taylor and Frances McNaught from the Department of Agriculture, Ottawa. It is a Canadian cookery book. Many if not all of the recipes are from what was the Galt area of Ontario, now Cambridge, and surrounding communities.
I found this simple recipe for marble cake, using actual chocolate. Most earlier recipes for marble cake that I've found use some other colourant, like cochineal for the secondary colours, not necessarily other flavours.  I'd been checking books as I went through them, to find a marble cake which used chocolate or another flavour, rather than colours.   Finding chocolate marbled cake was definitely a bonus.
I mixed the try ingredients in one bowl, and the wet in another.  I used a pretty standard method for making the batter.  I added the flour, cream of tarter, soda, salt in one bowl and stirred it with a wisk to mix it well.   I creamed the butter and sugar, added the egg and beat it until light coloured.   I then added the milk and vanilla.   I added the dry ingredients in several portions, mixing well between additions.
I separated out approximately half of the batter into another bowl.  I found a box of bakers chocolate, did a quick search to find the size of chocolate blocks in 1898, and ended up using two, although in hindsight, it was unnecessary.   It would have been tasty and fine with a single modern block of baking chocolate.   I stirred the melted chocolate into one half of the batter.
I had buttered and floured two 8 inch cake tins.  I only used one.   I think that my batter was a little thick and it blobbed rather than delicately spooned into the tin.  In the end, I realized that not only would I not be able to spread this gloppy goop into two pans, but they would be very thin layers if I did
so.  I scraped the batter into the pan, best I could, first using a spoon, then a spoon and spatula and finally, just the spatula.   I had to run a knife through to try to get the two batters to settle, and then I dropped the pan lightly on the counter several times to try to eliminate any possible remaining air bubbles. 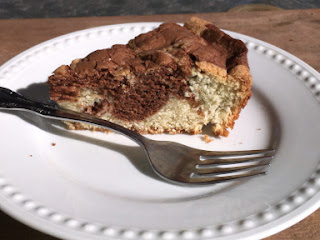 It took about 30 minutes to bake in a 350 F oven
The finished cake is a lovely cake.   While I was worried it would be dense, it has a lovely texture.  It has a soft crumb and a flavour which shows off the butter, vanilla and chocolate perfectly.   It didn't need an icing to help it along.   It is perfect as is, although for a birthday, I'd definitely ice it

I am putting this recipe into my repeat file because it is worthy of being baked again.
Next time I would sift the flour first.  I think that would help keep the cups of flour be less compacted, helping with the too thick batter.  Or I'd add another 1/4 c of milk.
The cake is likely pretty accurate though.   I have no idea what the cost was because I had all the ingredients on hand.  Not horribly expensive though as it's a single layer cake without any large amounts of ingredients
Posted by Nina at Saturday, October 17, 2020 1 comment: 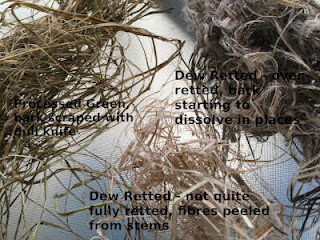 Here are the samples of nettles processed three different ways.  The green, thicker fibre was fresh nettles, peeled and scraped with an old butter knife.  By old, I mean , I found an antique butter knife at the thrift store for 50cents and used it, as they have a straight, dull edge.  Modern butter knives, or table knives, have a bit of a taper to them, and often have a bit of a serrated edge at the tip.   That made it much more difficult to scrape the nettles, hence the antique knife use.

The whiter fibre was from the nettles that were dew retted.  I bundled them up and layed them on the ground, flipping them every couple of days.  Depending on what you read, it can take anywhere from two days to a couple of weeks to be fully retted.  I left the bundles for two weeks before I tried to process these.    The fibres didn't easily peel off of the bark, or the centre core, so I thought they may be under retted.  The colour was nice though. 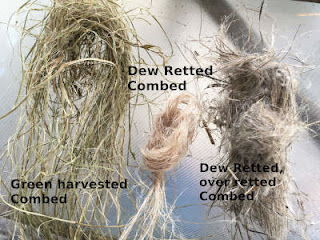 The darker fibres had been retted for several weeks more.  I'd actually sort of forgotten about them as I was busy with canning.  My sweetie asked me when I was going to use them as he needed the space where they were sitting, to stack wood.  The outer bark had totally disappeared in some places and there were fibres actually showing.   They were quite easy to peel off, however they were breaking at some of the nodes on the stems.  Rather than a creamy colour, they are grey.

I don't have any proper processing equipment, like a flax break or hackles, which would have made this a lot easier and more useful.   I had a mallet, some wool combs and medium carders. 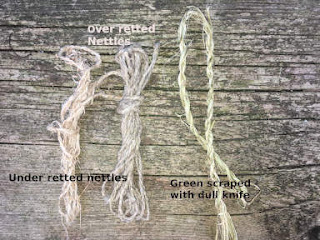 The under retted nettles and I call them under retted because the outer bark was difficult to remove in a lot of places.   I lightly bashed them to break the pieces up, pulled out some by hand and them combed them.   Many pieces still stuck.  I combed the fibres to remove more of the trashy bits and after getting a bit frustrated, just spun them and hoped for the best.  They were fairly long, spun quite nicely, but some of the bits were stuck fairly firmly.

The over retted nettles were very soft.  The outer bark released quite easily when combed, but there were still some fibres with bits out outer bark stuck to them.  I ended up carding these as the fibres were shorter after combing, maybe 3-6 inches long.   I spun them from the end of the rolag, with a semi-worsted forward draw.

The green fibres should have been spun before they dried out.   I had to twine and ply by hand, which is an acceptable way to make a strong cordage, rather than yarn.  If I had a spray bottle, I think spritzing them with a bit of water, covering them and letting them sit for a couple of hours would have made this much easier.  But the sample I made suggests that this would make a strong rope.  I think it would make a lovely addition to a basket making project.