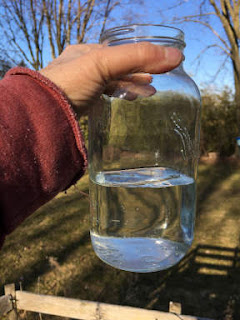 One batch of maple syrup was too thick.   We do the main boiling of the sap outside and bring the almost finished syrup in the house for me to finish.   I think this particular batch was at or almost at the sugar percentage, or temperature that syrup finishes at.  By the time I brought it back to a boil in the finishing pan, it was too high a temperature.   I filtered it, then reheated to bottle and only half the jars sealed.   The sugar crystals started precipitating out by the next day.

The thick syrup is absolutely delicious.  It is a wonderful ice cream topping, but it is crystalizing in the jar.   I took the unsealed jars, poured the syrup into a pot, and thinned it with some more of the crystal clear sap that is still running.    While the syrup was absorbing the sap, I washed and sterilized the jars.  When the sap was completely mixed in to the syrup, I reheated it to 219F, and rebottled.  This time, all the jars sealed and hopefully I salvaged the syrup. 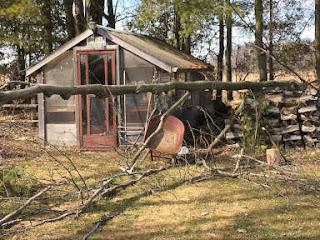 On top of this, we started boiling sap on Thursday evening, then Friday evening and both weekend days for another 5 litres syrup.   The sap is running like crazy right now so you have to boil when you can.   With the weirdly warm weather we're having, the sap could stop being viable at any time.

I went outside to the chicken coop last Monday and found this. The tree was part of a larger maple tree with 3 trunks coming up.  Well only two now :). It missed the greenhouse and missed the chair my sweetie was using for last weekends syruping.    It fell right in between the two, only managing to take out the wheelbarrow.   It was the best place for one large maple tree trunk to fall.  I'm a bit sad because I know that shopping for a new wheelbarrow isn't likely on the schedule until after we're vaccinated here as we just aren't going out much at all.   It means a little more effort will be needed  to expend for gardening chores.      The tree trunk is already cut, split and in the drying stacks for future use. 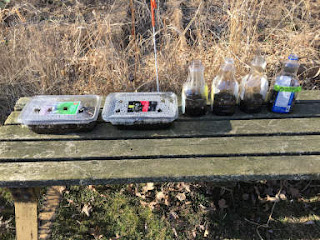 I've moved the winter sowing containers from the deck to the edge of the garden, where it gets a lot more sun. They're on a bench in hopes of protecting the containers from chooks and curious other creatures, including a rather oblivious guy on a lawn mower, just in case we get to that before planting.

Right now there are 2 containers of woad, 1 of chives, 1 of dyers coreopsis, 1 lettuce blend,  and 1 with just a couple of tomato seeds.  I still have a few more seeds to start outside and the rest of my tomatoes will be started indoors.

I like the winter sowing experiments though, because I get to plant things earlier than I can start things indoors.   My experience is that indoor started plants tend to get very leggy and weak stemmed if started too early, without enough additional lighting.  This year, I definitely don't have enough additional light. 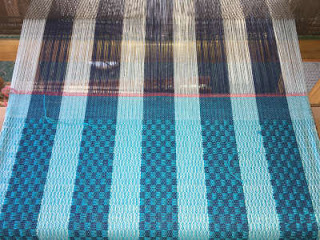 These are the new tea towels on the loom.  They are a huck variation pattern.  Not only are they fairly quick to weave off, but they look much more complicated than they are.   The bonus is that the weft colour has a significant influence on how the towels look when done.  Each towel will look quite different depending on the weft colour chosen.

I'm betting lots of people have done these towels.  The pattern was in an issue of Handwoven Magazine a number of years ago, and here is a similar, if not the same project free to download.   I'm sure everyone and their sister has made these towels.  I even was inspired colour wise by a guild project a couple of years ago.  The grey and navy works with so many colours and the light and dark stripes add a lot of interest.     One towel down, and only 4 more to go. 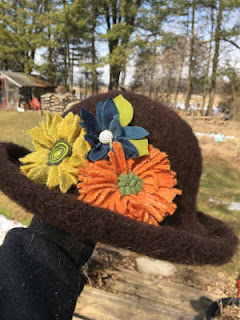 A while ago I made this hat.  It's knitted and then felted.   I made some proddy flowers for a demo I'm doing and they were perfect to display on the hat.  It makes the hat really fun.  Right now the flowers are just  pinned on the hat with straight pins.  The hat is thick enough that the tips bury in completely.   Once I feel comfortable going out to get crafts supplies, I will get some pin backs and finish the flowers off properly.  Alternatively, I could just stitch the flowers down permanently.

I wore the hat on my walk the other day and it was super warm, despite not covering my ears.  Like really, winter appropriately warm.    Yay for that! 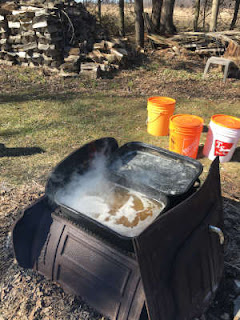 We did our first sap boil this weekend.  We had about 120 litres of sap, which boiled down to almost 3 1/2 litres of maple syrup.  It should have been a full 3 1/2, but I misread the thermometer and I finished it at a degree higher than it should have been.   Sadly, only 3 of the 500 ml jars sealed, so tomorrow or Tuesday, I will empty them into a pot, re-heat them and then reseal them in clean jars.

It's really good this year and my temperatures mistake means it's super thick.   I admit that I licked the spatula when I was done scraping the last of the filtered syrup into the pot for reheating, before canning.   YUM!

It feels like I should have gotten more done this week, but all of these projects took way more time than anticipated.  Well, the syrup boiling always takes a long time, but the flowers were part of a demo which will be done with a power point. It always takes me more time than expected to put one together.  Dressing the loom is always a bit of a slow project.   Too many distractions :)

We've been having connectivity issues on and off for a while.  Last week it suddenly got worse and then poof, we had no connection whatsoever.   After rebooting modems, unplugging and re-plugging, turning off and turning on, we had to call for assistance.   We got the normal please turn off and then turn on.   Then the next step was unplug and re-plug, but using a lot more words.   By now, my sweetie was getting frustrated, because we'd done all that multiple times.  He went outside to check the dish and it was unplugged.   He plugged it back in, but the connection was obviously loose . Our connection lasted 3 minutes and was so slow.   Once he relayed this info, we had a repair guy here at 8 am the next day.  It turns out that because our dish was installed on a tree and not a post, the tree grows and loosens or pushes out the bolts.  In our case, it snapped 3 of the bolts, which put the dish out of position.  As well, the cable connector hadn't fared well either, and needed a replacement.  In all, the poor repair guy, didn't just do a simple repair, but pretty much had to reinstall the whole kit and caboodle.   It took him  a bit of time because it was a miserably blustery, cold day with snow squalls, but by mid morning, he was on his way and I got to check my email!   Yay! 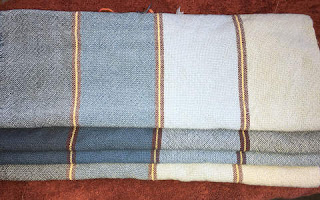 I wet finished the blue striped tea towels. Everything that could go wrong with these, did so.  I ended up with only 4 towels instead of 5.  Not a huge deal because I'd planned for 4 but had enough loom wasted for a 5th because I'd tied on to a previous warp.   They are the same pattern was the pink and green, but using a series of different shades of blue.   I think  I like this better because the colours are less affected by the warp colour.  Also because they are blue.  :) or at least they don't have green in them. 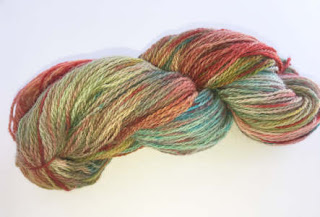 I over dyed the red and whitish yarn that I didn't like.  The white went a dirty colour with just a hint of peach.  I thought it was ugly.  I left it lying around the living room so I could get used to it and it still didn't appeal to me.   So I soaked it in some vinegar and water, and put some spots of dye on it.   I was going to do sprinkles of dry dye but realized that I didn't want to waste one of my good masks doing this.  If I'm going to sprinkle dry dye, I want good lung protection.   Instead, I found 3 packets of Kool-aid that I'd picked up on a whim when they were at the check out at the outlet store, ages ago.   I had pink lemonade, mango and blue raspberry.   The pink was pale and insipid, but combined with the other two colours, it made  a lovely combination.   I love the yarn now.   I want to use it as weft for a scarf, using a navy warp. 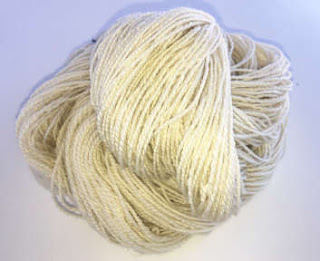 I spun some 100% merino and plied it.   This is 338 yards, wet finished and ready to go.  If I have enough after doing the numbers for the above mentioned scarf, I will dye it dark blue and use it as the weft for the scarf project.   I'll do it on a table loom though, so there is less loom waste.  I still have more merino roving so I can always spin up more if necessary. 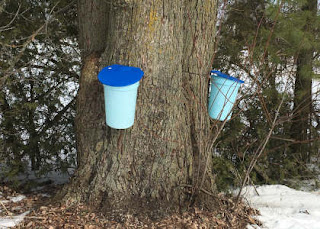 We checked the long term weather forecasts a number of times.  They kept saying we'd have lovely above temperature days and cooler nights, so we figured it was time to put the spiles in the maple trees.  As soon as we did so, we had a weather forecast change and now we have put our sap buckets out with a week plus of cold weather.  It's below freezing during the day, so no sap will drip.  :(  We should have waited a week.    We did have one day when the sap ran, but it's been so windy, we left the sap to freeze in the buckets to hold them on the trees.   There wasn't enough to do a boil anyway.