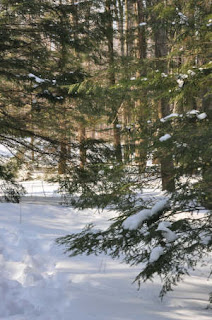 I've crafty things saved for the next post.  I'm still trying to decide if they were successful or failures.  The ramie I spun was thicker than I wanted, the cake dyed wool is bland, but is growing on me and it seems I may have tied on a warp to the last project and failed miserably in one little section.

On the weekend though we went for short hikes on both Saturday and Sunday.   Even though our walks are usually less than 3 km, they are a highlight of each week.   It's amazing how being out trudging through the bush on frosty days, can lift one's spirits.

I almost wish I had a mask with me though, not because it was cold, but there were way more people out there than we had expected.    It would have been fine on Saturday, but we took the path to the right and everyone else took the one to the left, so we passed everyone on the trail.  On Sunday's hike, it was busy, but we took the correct path, so it wasn't so bad.    Both main parts of the trail were fairly well packed down, which made it easier to trudge through.  The one side spur we took was not so much and we slipped and dragged through that part. 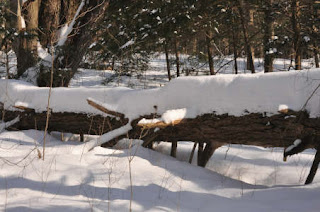 We've had snow regularly over the past few weeks.   I've not had access to my car because it's better in the snow than the truck, so those heading off to work end up using it. It's not that I have any place I need to go, especially since we've just come out of another Covid lockdown.   It's sometimes nice just knowing you can go out if you need to. 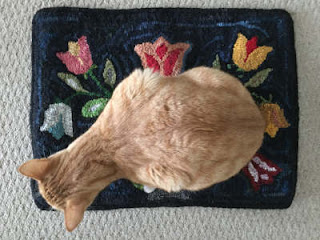 The Ontario Hooking Craft Guild is having their annual convention on-line this year.   Our local guild is doing a virtual rug display.    I was taking a photo of my entry, or trying to.   Phil had been zooming around the house like a crazy cat.    I barely had this rug set down to photograph and he came out of nowhere to plop himself down on the wool rug, as if I'd laid it down specifically for him to check out.    He does look quite at home there.

He had been racing around the house for about 10 minutes or maybe 15 and then popped himself down on the rug.  After I shooed him off, he settled himself on his favourite sofa blanket and slept for hours.   He is a real sweetie though.

Spring is coming.   We have temperatures forecast for above freezing.   This means the sap will be running and hopefully we'll be syrupping for the next couple of weekends. 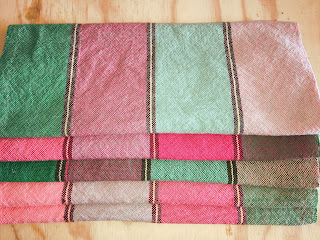 The pink tea towels are wet finished.   They washed up nicely, although there was a bit more shrinkage than I anticipated.   I don't imagine it was any different from other towels I've made, but just that I haven't woven tea towels in a long while so had forgotten.

I just piled the towels up, without matching the outside colours.  Still, it's easy to see the difference that the weft colours made on the towels.   I wasn't fond of the changes that the darker green made on the colours.  My favourite was using the pale pink.  I ended up weaving the extra towel in the pale pink as well.  I think it kept with the intended colour scheme better. 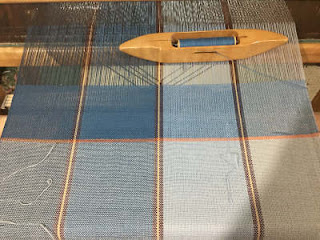 The next set of towels is on the loom.  I tied on to the old warp.  Usually this is fairly quick and effortless to do.  However, I managed to find a sleying error and had to resley about 1/4 of the warp.  Luckily it was near the last stripe so it wasn't too fussy or overly time consuming.  When I was winding it on, I came to the end of the roll of cheap watercolour paper I'd been using as packing paper.  It worked really well for weaving, pattern making and anything else, except of course when I tried it for watercolours.   But there was something icky on the inside of the roll and I didn't want it touching the yarn, so I snipped it off.  All was good until I couldn't reach the end properly.  A few threads caught on the paper and yep, I snipped them off when I trimmed the last bit of the paper.  After doing a rough measuring, I simply knotted the cut ends together as it was right in the general area of the end of the second tea towel.  We'll see soon if I was correct.

Here you can see the end of the first towel, with the light grey warp of the first stripe and the start of the second towel with the medium blue of the third stripe.  It sure makes a huge difference! 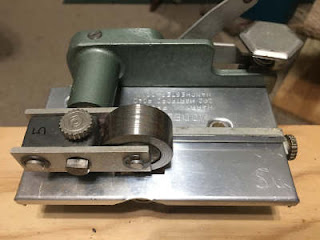 This is a Fraser cutter, used for cutting wool strips for rug hooking.    I have been looking for one for a while so that I could stop cutting my strips by hand.  That is pretty tedious.   My first choice would have been a Bolivar or a Townsend, but neither was in the budget, so I had to wait.  Over the summer I found a Fraser, but it only had a # 4 wheel that worked.   The wheel number determines the width of the wool strip which is cut.   A #4 is 1/8 in. wide.   It makes for a lot of detail and is a little more difficult to work with than a #6 which is 3/16 in. wide or a #8 which is 1/4 in. wide.   My favourite so far is the #6, which seems to be the hardest cutter wheel to find second hand.  But our local Hooking guild had a silent auction and they put their spare cutter up with a 3, 4,5,6 cutter wheels included.   I bid and won this for about the same price as a single new cutter wheel would cost.   It works well and I had a lovely time playing with it to cut strips for the rug I'm working on. 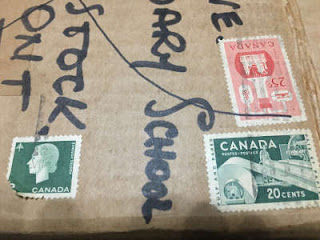 The cutter came in this box, which is likely the original shipping box.   It was originally destined for a rug hooking class at a secondary school.  I looked up the stamps and they are from 1956.  The stamps were issued to honour the chemical industry and the pulp and paper industry.  I wonder if they'd do the same today.

I can't find the original price of the cutter from that year, but I know that a friend purchased one in the 70's for $66.   So these cutters hold and increase their value!  They cost about $600 and up new and still look almost exactly them same.  The cutter works beautifully regardless of it's age.    I'm really happy that I got this as it means I can get some work done on my rug. 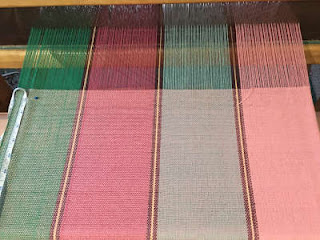 I finally cut off the scarf project that I hated, wound a warp of 2/8 cotton for tea towels and dressed the loom, in quick order.  The pink and green warp had 2 colours I wasn't fond of, the greens, plus the pinks aren't colour I often use, for weaving at least.   I had grabbed a cone of the pale pink and challenged myself to build a tea towel project around it.  This colour combination felt very spring time to me. 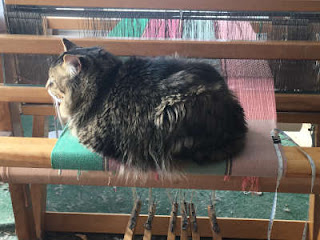 Kevin liked the towels!  We've had a few sunny days and he would situate himself on the loom to enjoy the sun streaming inside.   Usually he just sits on the front beam, but this time he kept sitting on the towels as well.  Luckily, it didn't affect the tension of the project, although it did cut into my weaving time.  I realize I could have just shooed him off, but he doesn't get a sunny spot to himself too often.  Usually one of the ginger kitties bumps him away, so I let him enjoy his moments in the sun. 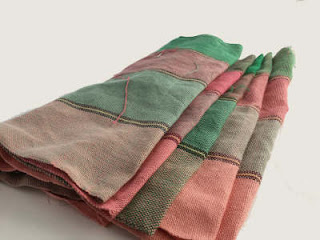 I planned the project for 4 towels.   I used 2/8 unmercerized cotton, sett 18, tabby weave.   I used only a single colour for the weft, but I rotated through the 4 main colours I'd used for the warp.  These towels flew off the loom.  Please note, there are 5 towels shown.  That is because I had so much loom waste left, I wove off another towel.  I had enough left for a napkin as well, however because I'm going to tie on another towel, with the same details and pattern, but in blues, I left the extra warp length to make tying on easier.

I stitched between each towel, on both sides of the dividing marker and at each end of the length of towels.  Interestingly, there was virtually no shrinkage off the loom.   They are 18 inches wide by 32 inches long before hemming and wet finishing. I've tossed them in the washing machine and will then machine dry them before hemming, which I will do by machine.

I played around a bit with different warp tensions while weaving.  I learned a fair bit.   I did this because we have a jack loom in the Guild studio that people have complained about being really difficult to treadle.   A couple of us have had no issues with this though and I figured out that for that loom, if you ratchet up the warp tension too high, you can't easily lift the shafts and get a really small  shed.    With my counterbalance loom, the same issue happens but to a much lesser extent.  However, if you don't get the warp tight enough, the bottom threads in the open shed are too loose and skipped threads both upper and lower, happen more often.   I found tension more of a personal preference with the counter balance loom.  However, with the jack loom, tension definitely affects usability.