In between my historical cooking experiments for the Historical Food Fortnightly challenge, there has been a bit of spinning. 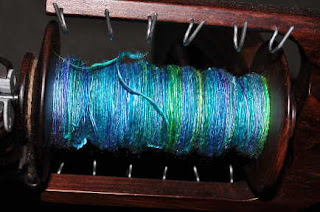 A bombyx silk with a captivating colour named Tidal Pool.   The colours are gorgeous but it reinforced how much I really don't like spinning silk.  I love spinning silk in a blend though and hindsight being what it is, I should have blended this silk with some merino wool.  There is only 50 gm of this and it would have been a good way to stretch the pretty silk so I had enough for an actual project, with the bonus of making it nicer to spin.   Live and learn... 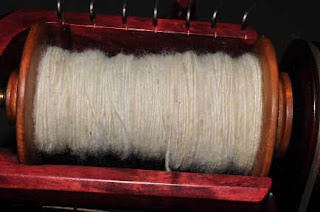 There has been more spinning of the giant white fleece. More long draw. More drum carded batts pulled into roving.  Eventually I will have enough for a sweater.  I was keeping track of the length of each skein as it came off the niddy noddy, but the post it note I was using, got unstuck and has disappeared.   I blame it on Kevin, who was playing in the area and on myself who stuck the little piece of paper on my desk, unfortunately I fear, in a place where the little square could flutter into the trash can if dislodged. 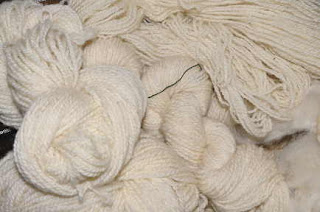 Regardless, my pile of 2 ply, white yarn is growing.  I am super comfortable doing the longdraw now.  It was good before, but after all these skeins, it is a comfortable skill and I'm very happy with the ease of consistency.   I know I've talked with some spinners who won't try new ways of drafting, and I wonder if it is just that as adults, we've forgotten about practicing and the wonders it can do for a skill.

HFF - Sweets For the Sweets

The Historical Food Fortnightly challenge #4 is Sweets for the Sweet,  recipes for sweets, sweetmeats and candies.   I cook and I bake, but a candy maker I am not.   I was really thrown into a quandry with this challenge because of that.

This time I chose what looked to be a simple candy recipe from The Complete Confectioner, (Parkinson, Philadelphia) 1864,  Pastille drops (peppermint).  It looked easy enough, heat sugar, flavouring and a little bit of water until almost boiling and then drop on pans and stir until cool enough to form rounded drops. I used a kilo of sugar on 2 different tries, had a bottle of peppermint extract explode (what a mess!) and all I smelled was peppermint for 2 days.   After the second grainy, ragged, sugar crystal failure, I moved on.

Because the hens have been little laying machines, I had dozens of eggs on the counter.   I decided on sponge cake.  The Good Housekeeper  (Sarah Hale, Boston 1838) has a recipe for Lemon Sponge cake.  I knew when I was adding the flour that the texture was wrong and there was too much flour.  I should have stopped when instinct told me too, but I followed the recipe exactly, because in my experience, the recipes usually work out just fine.  I ended up with a tough, dry albeit tasty cake.   The chickens liked it just fine.

I went back to The Cook's Own Book (Boston, 1832) which is fast becoming one of my favourite cookbooks.   I did adjust some of the quantities to use a tad less sugar and flour.   There was enough batter to fill a tube pan.   It looked perfect when baked.  It really looked like something I would feed to friends and not just family (or the chickens).

YUM!  This was truly delicious. 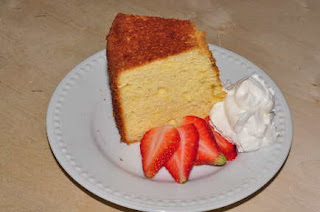 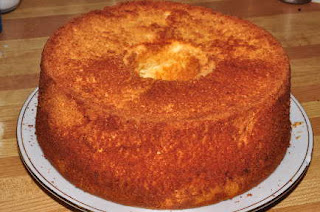 Zest the entire lemon peel then cut in half and squeeze the juice.    Separate the eggs.   Combine 10 yolks and sugar and beat until thick.  Add the zest, lemon juice and then gently mix in the flour.   Using clean beaters and a clean bowl, beat the egg whites until they are firm and hold their shape.   Gently fold in the yolk mixture until no white streaks remain.   Pour into a prepared pan and bake at 350° for 20 minutes and reduce heat to 325° until the top springs back.

Using cup for cup gluten free flour is just a straight substitution and requires no additional xanthan gum or additives.

Time - 2 days until the final cake which was really only about 30 minutes until it went into the oven.

Cost- supplies on hand except the bottle of peppermint extract which was $3.59

Accuracy - It probably should have been made in a round pan rather than the tube pan, but it was the only pan I had which would hold that amount of batter and I only have singles for round pans for some reason.   This cake is gluten free, so not at all accurate in that sense.

This type of cake seems to be modernly known as an American Sponge cake, using no added butter.   It has few ingredients and the flavours could be easily switched up by not using the lemon and adding other flavourings like nutmeg and allspice, or a bit of cinnamon  or even switching out some of the flour for a bit of cocoa.

3. History Detective  For this challenge, you get to be the detective! Either use clues from multiple recipes to make a composite recipe, or choose a very vague recipe and investigate how it was made.

This challenge was a true challenge.  The vague recipe/composite recipe idea gave me much to ponder.   In the end, I chose a vague recipe from A Cook's Own Book, 1832, Boston, while my recipe ended up a composite of a bunch of different recipes.

I made pork sausages.    There were recipes for sausages using different meats, including mixes of assorted meats.  Hanna Glasse also mentions in a recipe for pork sausages that beef makes good sausages as well, (The Art of Cookery Made Plain and Easy,1805).   However beef is crazy expensive right now and pork goes on sale regularly, if you aren't fussy about which cut you use.     There are similarities in many of the recipes, the main one being 2 parts meat to 1 part fat.   Many recipes use sage, salt and pepper, but cloves, nutmeg, lemon thyme, thyme, rosemary are all spices and herbs suggested.

Pork was on sale this week and I bought a 2.5 kilo piece of pork loin for $8.55.   The next item to locate was a length of sausage casing.   That was less difficult than I expected when the only butcher in town gave me a little pile of casings to play with.

Pork loin was probably a bit to lean for this experiment, but I used it anyway.  I chopped into strips and some into chunks to see which ran through the grinder most easily.  The strips of meat were the easiest to use.    Yes, I am thankful for my electric mixer, with fancy attachments.

I  used the hand grinder to stuff the casings.  Sliding the casings onto the sausage tube was certainly a job to bring out the sense of humour of a 12 year old in whoever walked by.  I started filling the hopper and cranking out the sausage into the casing but it was slow going.   In the end, I needed help and needed to relocate the grinder, which put it at a better height, more stable but facing an awkward direction.  With hubby cranking and me filling, we got most of one batch of sausage stuffed into the casing, but it was really slow going and when arms started getting rubbery, I was on my own. 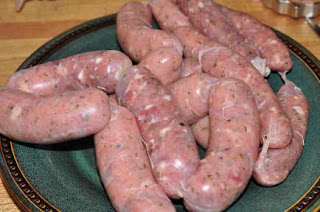 I ended up taking the stuffing tube off the grinder and pushing the rest of this batch and the second batch by hand.  If I had a wooden dowel or spoon which fit, that would have been a lot easier, but I had to use my thumbs.   Because of this, it took much more time than it should have.  It ended up taking about 3.5 hours from set up to clean up.

The link sausages were the two person effort and the single sausage coil is the one I did by myself. 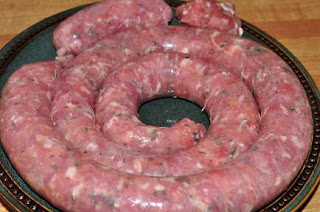 I added herbs and spices, mixed it in and then cooked up a bit to see if I liked the flavour.  In the end I used  1 tsp salt (I hate overly salted foods), 1/2 tsp pepper, 1 heaping tbsn sage, 1 heaping tbsn rosemary for the first sausage and the second was 1 tsp salt,1/2 tsp pepper, 1 tsp nutmeg, 2 tbsn parsley/thyme/lemon peel blend.
Your tastes may vary, play with the flavours to make the taste you like.

We put one meal worth of sausage on the bbq for dinner and 3 meals of sausage packets when into the freezer.   It was absolutely delicious.   Enough so that it was suggested that I get the stuffing attachment sooner rather than later, so that I can do this again.   With the right equipment, it is really easy to do and if you don't want to stuff the casings, patties or rolls of meat are perfectly period.

The recipe was very successful.  I like to think the accuracy was good, with the exception of using electric appliances and a gas bbq.   The cost for 2.5 kg of sausages was $8.55 for the meat and $2 for the sage.  The casings were free.  Everything else was already in my cupboard.  I will do this again and again, although I will insist that the nice butcher sell me the casings next time.

There is a PDF on the resource page (tab at top), of various sausage recipes,including the sources that I looked researched to decide on the flavourings and methods.