Trying again...   I managed to delete my whole post just as I was finishing up the final proof reading.   Sheesh, twice now I've done this.   The third time's a charm, right? 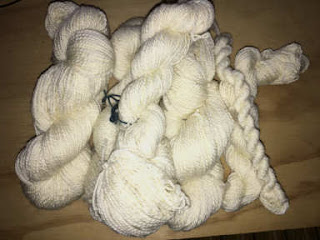 I've been spinning a lot the past few weeks.   I don't normally watch the telly, but I tend to spin, knit or do some sort of handwork at the same time, if I do indulge.  I have a bit of a love for British period dramas, regular dramas, panel and comedy shows.    We ended up subscribing to the streaming service Brit Box, which has meant that I've accomplished a lot of spinning.

This is merino.  It's a two ply.  I used a commercial sliver from The Fibre Garden.   It drafted like a dream and was so easy to spin.   I could spin well prepped fibre like this all the time!  I almost didn't ply it, but left it as singles for weaving.  There was a lot of it, but since it is mitten and toque season, I thought it could be  better purposed for warm woollies. 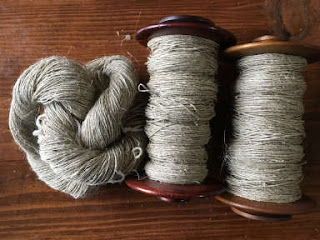 I had about 150g of flax sliver which I spun up as singles.   The sliver is a commercial tow preparation, with some very short bits and a lot of much longer ones.   It spins quite easily.   I have found that drafting and adding the twist works a bit more efficiently if my working hand has wet fingers.   I have a cute little flax water pot which I got from a talented potter one year when I was doing my Master Spinner at Olds College.  I like having the opportunity to use it.   It was also nice spinning the flax.  It's fun to spin and different than wool.  It makes a really nice change up. 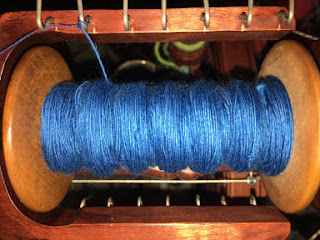 I've also been spinning up the rest of some blue cotton.   It doesn't have the lustre that this photo suggests.  It's just plain cotton.   However, my plans for an outdoor photo shoot were scuppered today when I woke up to heavy rains and wickedly blustery winds.   Instead, I just took snaps with my phone.   It is so dull and grey outside, that even by a window, I needed to use a flash.

I will ply the cotton and pop the finished skein into my container of cottons yarns, destined to become a garment.    I've been spinning up random skeins of cotton yarns and saving them for several years now.   The aim is to have enough to make some yardage for a shirt or jacket.   I should probably take some time to see how much I've actually spun.   It would be disappointing though, to find out that I wasn't even close to the yardage I might need. I think that's why, I never actually check.

With no Fleece Festival this year, I didn't stock up on winter spinning fibres.  Since I didn't purchase much last year either, I suddenly realized that my stash is starting to dwindle!  Egads!   I'm not buying anything right now though because we needed some electrical work done in the early summer.  We also just got the roof done and that was fun.  It cost $1000 over the estimate because once again we found the previous repairs had been done in a somewhat dubious manner, although likely the least expensive way possible.

When they removed the shingles, they found that there was no decking or sheathing on the roof. So they had to add a layer of plywood to seal up the structure and give something to nail into.  Of course wood is almost double in price these days.   But I will have to say that the roofers were very fast and efficient.   They showed up at 7 am on the dot.  They were finished, cleaned up and out of here by 3:30 pm.   We now have a roof which will not leak and it looks great.  As a plus, I can say they did the job the proper way.   We're happy about that. 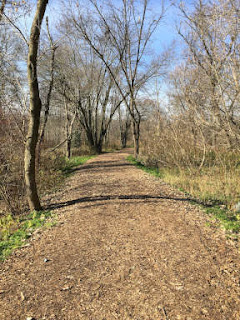 Today's weather has been amazing.  With a high of 19C and sunshine, it felt almost summery, instead of November!  This morning we took the time to take a short walk on a trail we hadn't done in a couple of years.   All the paths have been groomed and made accessible.  It made for an easy ramble.

However, the number of trees which have been removed made it feel like a whole new area.   I'm guessing they had to remove all the dead and dying Ash trees.  It's quite open now and much less like walking through the bush.  It's still a pretty walk though since much of the trail follows a winding river.

Being a weekday morning, there were few people on the trail.  We did follow the markings of what turned out to be a little 2 year old toting a huge stick, all around the trails, with his mom and a gigantic Newfoundland puppy, which weighed more than the two of them put together. 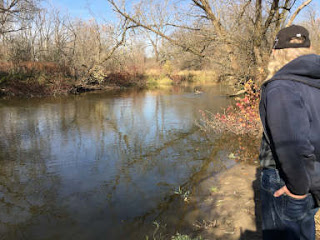 It was nice and relaxing to watch the river flow by.

There were ducks on the river.  They were in small groups here and there, rather than one large flock.  However, I didn't have my big girl camera with a good lens, only my phone, so I was too far away to get reasonable photos of the ducks.  Still, I have to say I'm happy to have an alternate camera for when I'm in unexpected situations, so I can at least still take snap shots.