I made a steamed pudding today.   I used a recipe from the 1832 edition of Cooks Own Book.  I've had great results with every recipe I've tried from this book, so had high hopes for this one.  I had suet in the freezer and all the ingredients on hand.   I did have to make the bread crumbs myself this morning, but the rest were simple. 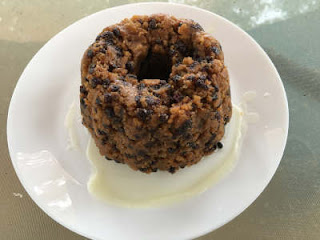 The recipe was pretty straight forward.   Mix everything together, pop into a pudding bag and boil for 2 hours.   I used a pudding mould, as I didn't have a pudding bag or cloth, or even any muslin on hand.

After steaming, the pudding popped out of the mould beautifully.  I was thrilled until the puddles of melted suet also poured out.  Ick.

The whole pudding was saturated with fat.  Touching it left a greasy mess on my fingers.  The small bite that I ate, tasted heavily of fat and currents.  The fat overwhelmed even the flavour of the ginger.   It left my lips soft though, not needing lip balm, despite today's cool windy weather. 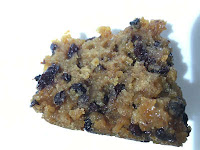 A simple slice was as unappetizing to look at as it was to eat.  The fat glistened on it.  It literally dripped.  I was amazed it held together too.

I don't have enough experience with steamed puddings to know what I did wrong.   I'm wondering if maybe my bread crumbs were not dry enough, as I did make them that morning.  I'd not had time to leave them to get completely stale, so partially dried them in the oven before grinding.  I weighed everything for accuracy, but I may have done something wrong there.  At any rate, the pudding was inedible by humans. 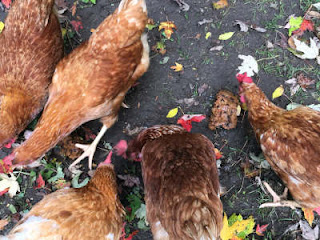 The chooks loved it though! 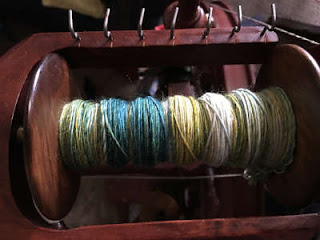 Dyed superwash merino.  I got the white roving on sale ages ago and just found the partial packet hidden behind something.  I did a quick dye pot earlier this summer and just started spinning it a couple of weeks ago.   This was the prettiest part.  The rest of the roving is spinning up green.   It makes sense since it is mainly yellow and blue.   I sort of missed that one. 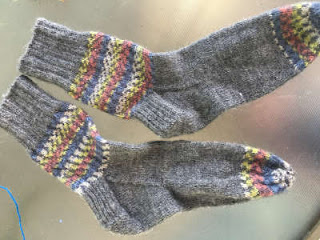 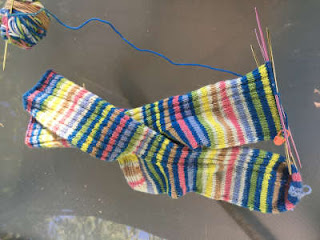 I bought a bulk package of this sock yarn ages ago at an outlet tent sale.   It is pretty when worked up.  Our water though, is iron heavy, so they tend to dull quickly, with an orange cast to them.   I had to re-knit the toe on the first sock, not one, but three times because I kept making it just a bit too big.   I chalk it up to a learning experience as it's been a while since I've knit socks for myself. 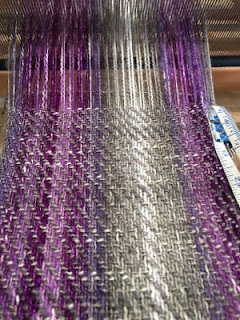 I just took 2 of these scarves off the table loom.  They are made with knitting yarn that was on sale and then half price of the sale price.   It's a gradient yarn for those one skein shawls.   By using the table loom, I can keep the tension from abrading the yarn.  This is because it has a new and yummy stainless steel reed and texsolve heddles.  Plus it's easier for me to control the tension since I can't ratchet the tension up like on the floor loom.  It makes a nice, soft, drapey scarf and I can sell them for a bit less than the wool, or wool/silk blends.  This one is cotton and acrylic. Some of the other yarns I've tried have mylar or shiny threads in them.   They work although you have to be a bit more careful.  I've found twill works better than plain weave.   You need to keep the beat light as the yarn does stretch a bit.   Also, the one I made which ran from pale peach to burgundy had too much contrast.  The purple is nice as is the one on the loom now, which is browns and other sandy colours. 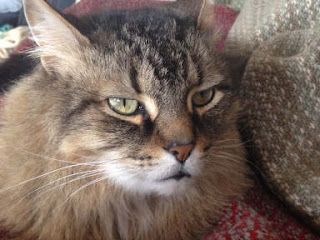 So yes, we had a cat named Cat.  His name was actually Mu, as in the Greek letter, but when he was young,  he was the only cat we had, and whenever anyone commented on him, or his whereabouts, it was always something like "Where is the cat? or Has anyone fed the cat?".  One day we realized that he responded to the word cat.  He'd look up. Sometimes he'd come when he was called and so his name changed to Cat.

He was almost 20 years old.  He was really my daughter's cat.   She was a good cat mom, but suddenly found herself in a situation where she had to work 2 jobs and I think she was still taking classes at uni, and Cat was still quite young.  He wanted attention, but she was really only home to sleep.   She came home for Christmas, and asked to leave him with us for a couple of months, while she got back to a normal situation.   Of course we said yes, but when she left to go back, we couldn't find Cat.  He was in hiding and had determined he was staying where he was.   As soon as she headed out, he popped out of hiding.  For years afterwards, she come home and he'd hide.  It was kind of funny. 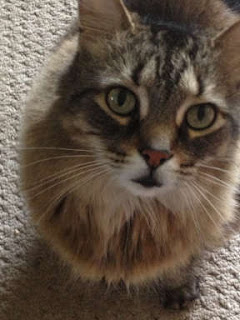 He was a good cat.  He was playful for many years.  He loved playing with a hand under a blanket.  When we lived in a home which had a gap under the bathroom door, he would play for ages just chasing a finger back and forth in the gap.   He had no idea how to play fight or wrestle, but he'd chase a guitar string around the house if you pulled it along.

When I had my hip replacement, he parked himself on my new hip and stayed on top of the incision until the staples were removed, when he moved to my feet.  Two days later, when the little staple marks had healed, off he went back to his normal routine.   He regularly looked after me like that.

He didn't like strangers, thunderstorms or mice.  He'd run and hide.  Except for when the farmer next
door was combining.  He'd sit on the table, looking out the patio doors, watching that combine go back and forth, with no fear at all!

He crossed the rainbow bridge on Sunday night. He will be missed.  He was handsome, caring and a very good pet.