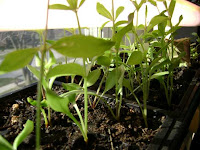 I started my seeds too early. With commercial madder seeds, I found them to take up to two weeks to germinate and be slow growing after that. The fresh seeds I harvested last summer must be happier as they started germinating very quickly and look at them now!
I've lots of them as well as a few extra for a friend who was unable to start any this year.
As well, I've got Japanese Indigo sprouting. I had read that i 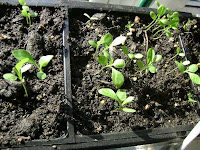 t can be difficult to germinate and fussy to keep as seedlings. I was lucky though I guess as a number of the seeds I planted germinate. I haven't tried to grow Indigo ( indigofera tinctoria ) though as we really are much colder than the required growing zone and I am not sure using the limited space in my garden is useful for that experiment. Maybe I'll be like medieval dyers and just buy my indigo. That way, my limited space will be used effectively.

Hubby's car died and he's using mine, so I'm effectively sans car for much of the time. When I get a chance, which doesn't include having to use the city bus, I'm going to pick up some row covers and start some woad seeds directly in the garden and see how that works. I know that it says you can just direct plant into the garden once the soil is workable, but this does seem like a good excuse to start playing with pushing the growing season.
Posted by Nina at Friday, April 18, 2008