It was a bit of non-stop weaving yesterday.  Normally I like to take breaks every 20 -30 minutes so that I can stretch, move and get  cup of tea.  Not doing that made it feel like a bit of a marathon, but I figured that was the only way to get it done.   Joining the two halves takes a long time.  It felt like almost as long to run that centre thread along each alternating pick took the same length of time as it did to weave.  Like I said it felt like that, although I'm certain it was not nearly that long.  Urgency as well as fatigue and a desire to finally be done just made each minute feel like it was ticking by at half speed. 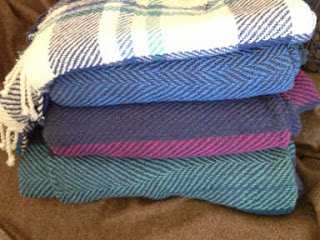 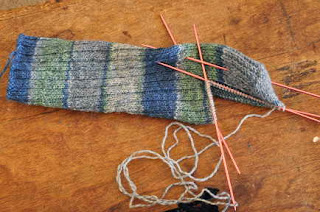 Last night at 9 pm, I was wet finishing the final blanket! I spread it out to dry on my drying rack. This morning, I couldn't tell if it was cold or still slightly damp so I draped it off the back of my spinning chair, in front of the woodstove for a bit.  In no time it was toasty warm and definitely dry.

That is a nice looking lot of blankets, if I do say so myself.  I hemmed the 3 larger ones.  I was going to fringe the final one, but in my rush, totally forgot to leave the fringe space on the warp,  between the two halves.  Oh well, it's faster to hem than fringe anyway!

Now I'm trying to catch up with my holiday baking and cooking which I let slide due to weaving those blankets. I got the cranberry sauce made this morning, the Christmas cake done last week.  Now for the gingerbread and pumpkin pies.  That will be it for this year though.

I reminded myself why I don't turn heels when I'm tired.  After finishing the heelflap at 10 pm, I decided to whip through the heel turn.. Nope, I got to frog it before I remembered my own advice.  I did get it turned this morning with my morning tea.  It's a plain vanilla sock, but the colours are soft and pretty.  Because of the simple pattern though, it's flying off the needles.  Not a bad thing in the winter and functional socks are a wardrobe staple.